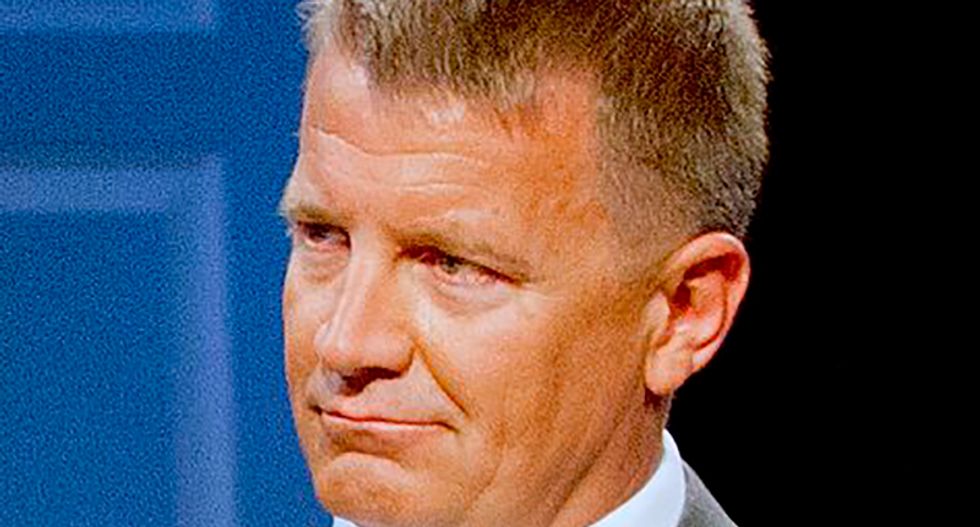 Former Blackwater CEO Erik Prince remains a symbol of the worst parts of the George W. Bush era. During the Iraq War, Blackwater was hired for private security in Iraq—and he was disgraced when, on September 16, 2007, Blackwater mercenaries opened fire on a group of civilians in Baghdad’s Nisour Square and 17 people were killed. But the soldier of fortune, now 49, has been making a comeback under President Donald Trump.

A report by Matthew Cole for the Intercept takes an in-depth look at Prince’s post-Iraq activities, noting that during the Barack Obama years, he unsuccessfully pursued work as a “mercenary” in Africa but “was somewhat successful at recasting himself as a globetrotting businessman” with his company Frontier Services Group. The election of Donald Trump as president in 2016, however, presented new opportunities for Prince (whose sister, Betsy DeVos, serves a secretary of education under Trump).

In 2017, Cole reports, Prince was closely allied with far-right agitator James O’Keefe and Project Veritas, described by Cole as “a group of conservative provocateurs who specialize is using hidden-camera footage and secret recordings.” And according to Cole, Prince and his allies used a ranch in Wyoming for training on “spying and self-defense” and hoped to make Project Veritas “the next great intelligence agency.”

A former White House official, interviewed anonymously, told Cole, “Erik was weaponizing a group that had close ties to the Trump White House.”

The Trump era has also found Prince trying to sell the president on privatizing the war in Afghanistan. Prince has had a close relationship with former Breitbart News executive Steve Bannon, who went on to serve as White House strategist in the Trump Administration in 2017—and Prince has used Bannon to pitch ideas to Trump’s team, including ideas on Afghanistan.

Prince’s plan for Afghanistan, Cole reports, “called for removing all U.S. troops” from that country and “replacing them with a small cadre of security trainers, a small fleet of light attack aircraft and a surge of covert CIA operations.”

In addition, Cole reports that Prince “is currently hawking proposals for preventing social and political unrest from Qatar’s foreign laborers before and during the 2022 FIFA World Cup. The proposal specifically names Project Veritas as a partner.”