New NRA president says it's her job to 'save' America with guns, God and Trump 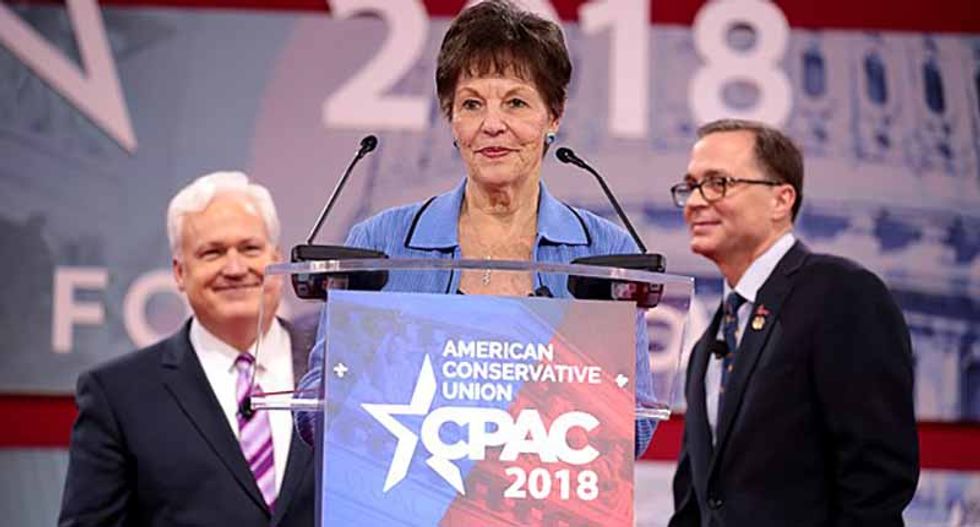 The new president of the National Rifle Association has some very conservative views on what America is. Carolyn Meadows sat down with a local Georgia newspaper and in a wide-ranging interview shared some of her disturbing beliefs, including what she thinks the NRA's number one job should be and what she thinks her job is really all about – and why.

Already making headlines are what some are calling Meadows' racist remarks, insisting a Democratic U.S. Congresswoman who ran on a platform of opposing gun violence only won because she's a "minority female."

But Meadows' views go even deeper into the vast right-wing reaches of Republican thought (she defines herself as "fiercely" conservative) and her beliefs of what America is all about.

"She became involved in gun advocacy efforts in the 1980s just before Ronald Reagan’s presidency, though [she] says her efforts began in earnest when she became a national committeewoman for the Republican National Committee in 1988," the Marietta Daily Journal reports.

“Mainly because I support the Constitution and the Second Amendment. I mean, that's why we are Americans,” Meadows says. There is no mention of any other amendments to the U.S. Constitution in the interview.

Meadows believes it's her job to "save" America, suggesting she's doing God's work while trying.

But she says, "I would not have taken this job if I didn’t feel like I could save this country. That’s obvious, I’m not young. … My husband said, 'Your whole life has led you to this point.' And he said, 'If you don't do it, you dishonor God.'”

She also believes there should be guns in schools and churches.

“I believe in arming teachers. Absolutely. In my church, I’m armed. My pastor is a shooter, a hunter, he knows I am, people in the congregation do,” she says. “This is not NRA position, but as far as I’m concerned, I’d love to have a sign out front: ‘We have gun-toting teachers and security.’ (Mass shooters) go where the people are weak.”

What are her goals for her two-year stint as NRA president?

“We’re going to work to get Donald Trump reelected, unity, and that’s primarily it, to be politically active, to bring gun-toters into the fold, to get more gun-toters to join NRA,” she said. “It’s a powerful lobby, not just for gun rights, but for rights. We believe in the Constitution. When we take our oath of office we actually swear allegiance to the Constitution of the United States. That’s why I do it.”