Nadler tears into Trump and Bill Barr for refusing to show up to House hearing: He will soon 'face a reckoning' 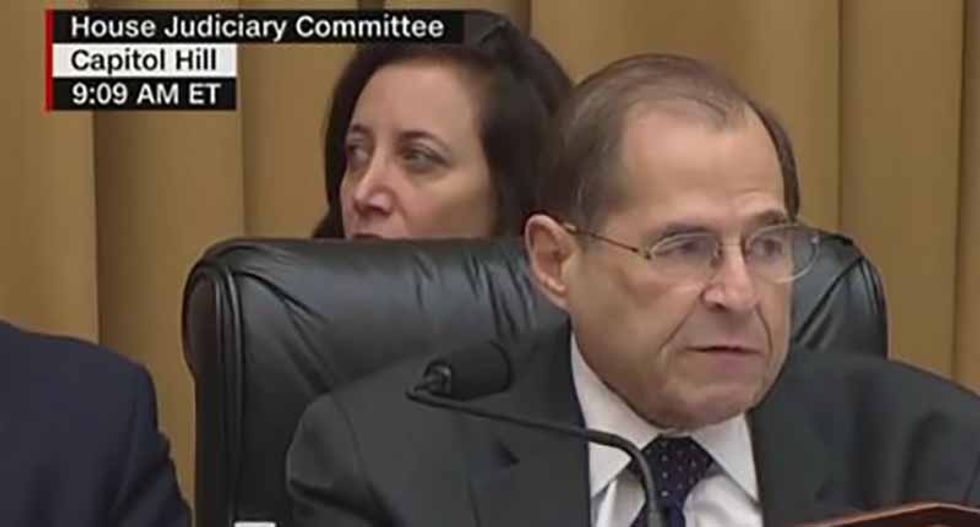 House Judiciary Chair Jerry Nadler (D-NY) tore into President Trump and Attorney General Bill Barr for his refusal to provide the committee with documents and testimony related to Mueller report, saying he was paving the way for a “dictatorship” — and adding Barr would soon “face a reckoning” if he didn’t cooperate.

“Every member of this committee, Democrat and Republican alike, should understand the consequences when the executive branch tells us that they will simply ignore a lawful subpoena from Congress,” Nadler said. “If left unchecked this act of obstruction will make it that much harder for us to hold the executive branch accountable for waste, fraud and abuse, or to enact legislation to curb that kind of misconduct or any kind of misconduct.”

“If we don’t stand up to him together today, we risk forever losing the power to stand up to any president in the future,” he went on. “The very system of government of the United States, the system of limited power, the system of not having a president as a dictator is very much at stake.”

“We will have no choice but to move quickly to hold the attorney general in contempt if he stalls or fails to negotiate in good faith, but the attorney general must make a choice. Every one of us must make the same choice,” he added. “That choice is now an obligation of our office. The choice is simple, we can stand up to this president in defense of the country and the Constitution and the liberty we love, or we can let the moment pass us by. We have seen in other countries what happens when you allow such moments to pass by.”

“I do not know what Attorney General Barr will choose. I do not know what my Republican colleagues will choose,” he said. “But I am certain that there is no way forward for this country that does not include a reckoning with this clear and present danger to our constitutional order.”

“If he does not provide this committee with the information it demands and the respect it deserves,” Nadler said, “Mr. Barr’s moment of accountability will come soon enough.”