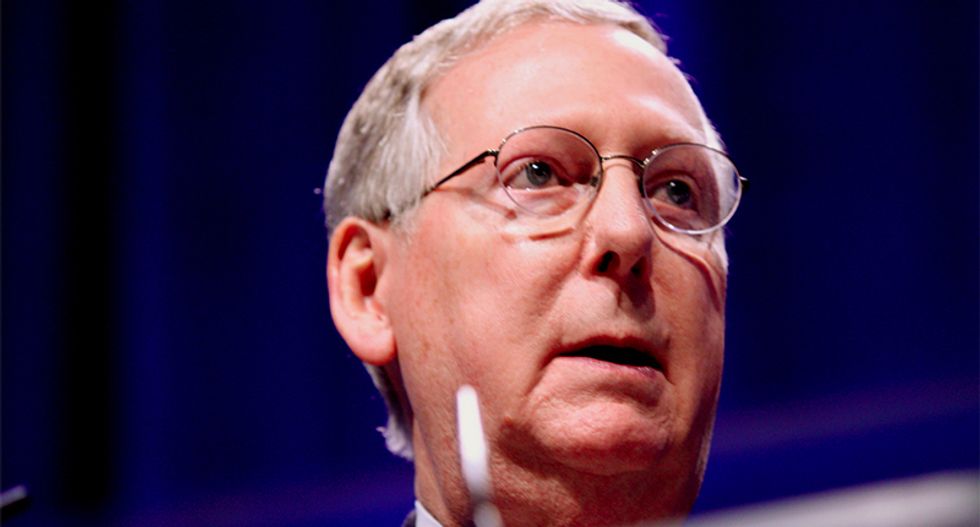 Image via Gage Skidmore.
Travis Gettys
and
Raw Story
May 07, 2019 The Right Wing

President Donald Trump is gaining a powerful ally in his efforts to prevent special counsel Robert Mueller from testifying.

Senate Majority Leader Mitch McConnell (R-KY) will deliver a speech Tuesday on the Senate floor calling for an end to congressional investigation of Mueller’s findings about Trump’s campaign ties to Russia and the president’s possible efforts to obstruct justice, reported Politico.

“This investigation went on for two years — it’s finally over,” he will also say.

House Democrats want to question Mueller about his findings, after Attorney General William Barr backed out of testifying before the House Judiciary Committee, and they have set a May 21 deadline for former White House counsel Don McGahn to testify.

The House majority also intends to hold Barr in contempt due to his handling of Mueller’s findings, but McConnell is joining forces with Senate Judiciary chairman Lindsey Graham (R-SC), who declared “it’s over” after the attorney general testified before his committee.

“With an exhaustive investigation complete, would the country finally unify to confront the real challenges before us?” McConnell is expected to tell the Senate. “Would we finally be able to move on from partisan paralysis and breathless conspiracy theorizing? Or would we remain consumed by unhinged partisanship, and keep dividing ourselves to the point that Putin and his agents need only stand on the sidelines and watch as their job is done for them. Regrettably, I think the answer is obvious.”