Leaders of the resistance: High schoolers march 4 miles in protest as classmate faces deportation to Mexico over traffic stop 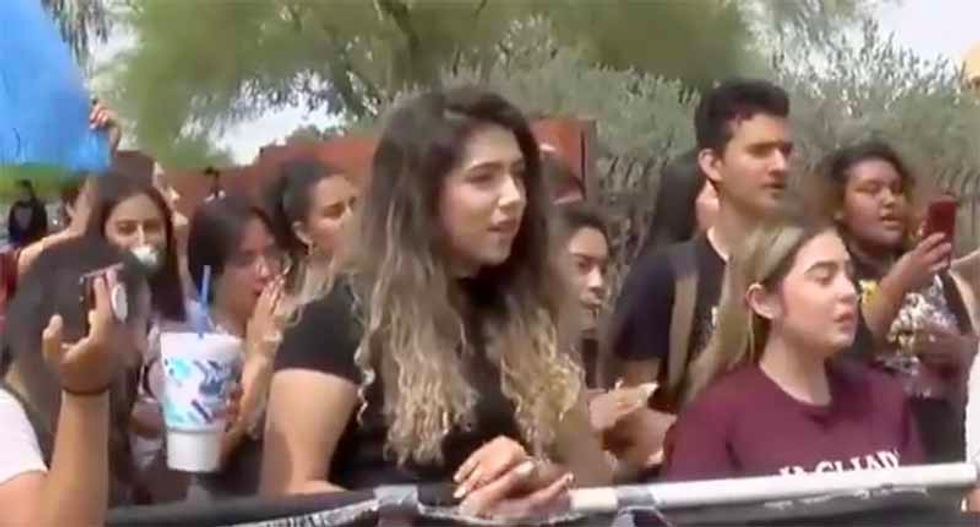 Image via Screengrab.
Marissa Higgins
and
Daily Kos
May 07, 2019 Video

Thomas Torres is a high school football player. He does yard work in his Tucson, Arizona community and buses tables at local restaurants. Lorena Rodriguez, as reported by the Associated Press, said that for years, Torres has lived at home with her family, sharing a bedroom with her brother. Both young men are scheduled to graduate from Desert View High School at the end of May.

One tragedy, however, is brewing: Torres, who has lived in the U.S. since he was a toddler, may be deported to Mexico. What spurred this? He was arrested by Border Patrol on May 2, after being pulled over for a traffic stop.

As reported by USA Today, Torres had been driving with two friends. Irvyn Rivas, a fellow senior who had been in the car at the time, said that Torres passed a field sobriety test. Then, things escalated.

“They held him in a cop car,” said Rivas. “They started calling Border Patrol and everything and we were like, ‘What for?’ And they didn’t answer us.”

The sheriff’s office claims they pulled over Torres to check whether his insurance was up to date. According to Rodriguez, Torres didn’t have a license on him when he was pulled over, which is where the subject of his status came up. The teenager has been kept at a holding facility in Casa Grande, Arizona. The next step is a date in immigration court. All of this, when he should be trying on his cap and gown and making memories with his peers.

But his peers are taking action. After his arrest, more than 120 students left class and marched to the sheriff's office and demanded his release. They marched about four miles from the school to the office and carried homemade signs. Slogans read “Abolish the Border Patrol” and “Without Justice, There Is No Peace.” One particularly poignant sign read, “Thomas is the American Dream.”

“All of this is unnecessary, if they could just let him go, because this does not need to happen,” said classmate Daffne Anselmo, as reported by USA Today. “He should be in school right now. … He should be learning and finishing his couple of days off, we just want him to graduate.”

“People like Thomas are needed in this country,” Rodriguez wrote on the GoFundMe page she set up to raise money for Torres’s associated legal costs. “He’s a hardworking young man willing to better his future.”

“He’s my best friend, my brother, he’s my ride or die,” Marcell Ibarra, who helped organize the walkout, said. “I would do anything for him. That’s why we’re out here.”

You can watch some of the march and protest below: