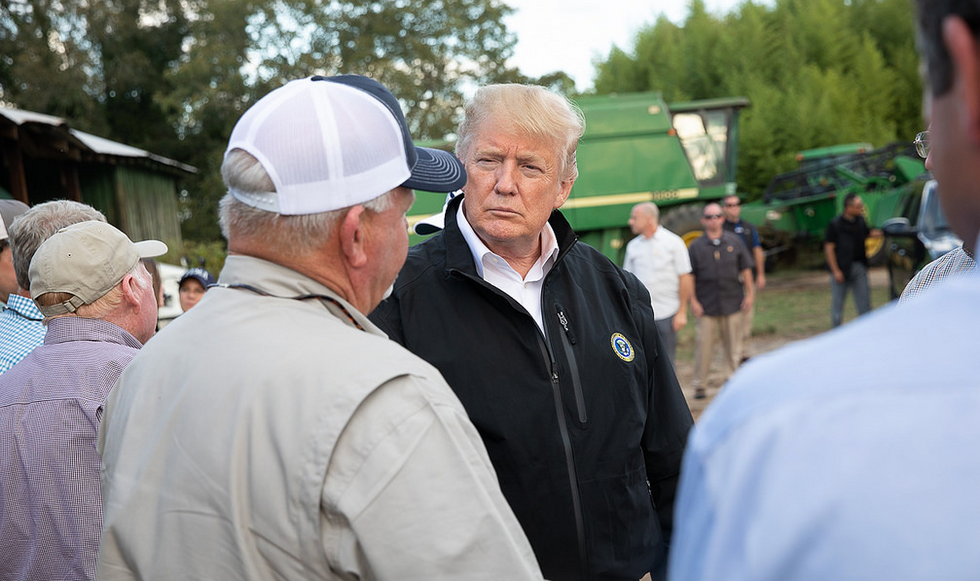 In media outlets, there has been much discussion of the effects that President Donald Trump’s tariffs are having on farmers in the United States. But retired Kentucky farmer Jim Pat Wilson, in an op-ed for Kentucky’s Courier Journal, asserts that there is one group of people in the U.S. who are often afraid to speak out against Trump’s trade polices: farmers.

Since his retirement from farming, Wilson has been growing hay for horse owners and leasing land to beef producers — and he stresses that many farmers fear retaliation from the Republican Party if they criticize Trump’s trade policies.

“Caught in the Republican Party’s political crosshairs,” Wilson writes, “farmers are stuck in an environment that has cultivated fear for anyone who dares to speak against the mighty GOP…. I have a lot less to lose than some of my farming friends, and I want to speak up for those who fear they will be retaliated against.”

Farmers, Wilson explains “don’t want handouts, they want solutions.” Trump’s policies, he stresses, are bad for farmers — and the “$16 million bailout” for farmers that Trump has promised “comes from the chaos of his own making.”

“Just like Mexico isn’t paying for a wall,” Wilson warns, “China won’t pay for Trump’s tariffs. The funds will ultimately come from the taxpayers because it is federal money that is used for the bailouts. Adding insult to injury, the Republican 2020 budget calls for a 15% funding drop for the Department of Agriculture.”

The Trump Administration, Wilson explains, “has made it impossible for farmers to criticize without retaliation from Republican landowners.”

Wilson concludes his op-ed by emphasizing that farmers who are afraid to criticize Trump’s policies publicly can speak out in the voting booth.

“Republicans have divided neighbors, and our farmers who dare to go against the grain are siloed for speaking up,” Wilson writes. “That’s why so many remain silent. Come Election Day, I hope our farmers find the confines of the ballot box a place for their own retaliation.”