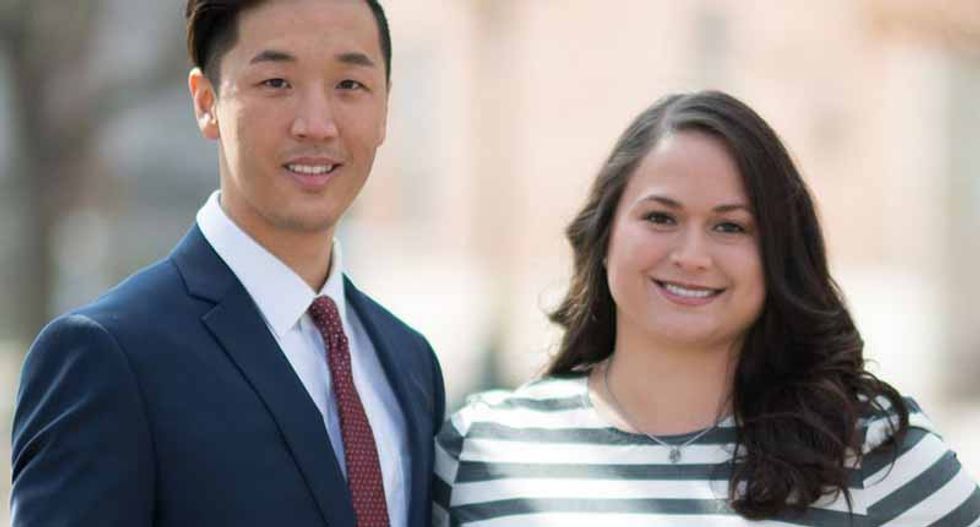 When Rui Xu (D-Roeland Park) was elected in November, 2018, Kansans had their first Chinese-American legislator. For families like mine, where my sons and spouse embrace their Chinese heritage, the election of the young representative helped highlight the fact that Kansas does, in fact, have diversity and that members of House District 25 were willing to embrace and vote for the young Democratic candidate with big ideas.

While district 25 was certainly willing to embrace the young legislator, over the weekend as Democratic elected fought for Medicaid Expansion, the chief of staff to the Republican Senate Leader Jim Denning (R-Overland Park) decided to take a jab at the young legislator using a racially charged gesture.

From The McPherson Sentinel

Rep. Rui Xu says he was offended by what appeared to be a racially motivated gesture from a top senator’s aide Friday night on the House floor.

Ethan Patterson, the chief of staff for Senate Majority Leader Jim Denning, denies making the gesture, and the moment in dispute wasn’t captured by the official video broadcast of House action.

As Rui exited the area, the Chief of staff put both hands together and bowed, a gesture occassionally used to mock Chinese Americans for cultural standards.

Sen. Leader Jim Denning was key in making sure that the Kansas Senate refused to even debate Medicaid Expansion, despite passage in the house, and had in the prior week decided to bail on a scheduled 4 hour meeting with the Governor over how to proceed on Medicaid Expansion. Despite the fact that a Democratic Governor, Laura Kelly, and a Republican Insurance Commissioner in Vicki Schmidt were both on the side of Medicaid Expansion in the 2018 election, Senate Republicans cowered in their boots, afraid to take a yes or no vote at all. Instead, Senate Republicans and staff openly discussed a new plan for expansion, one which could be done very differently.

As part of the Democratic coalition in the house, Rui Xu, along with all Democratic elected and some Republicans, had blocked the budget, demanding that the Senate drop the cowardice and provide Medicaid Expansion an up or down vote.

After arm twisting through the weekend, which involved the Senate Leader and his staff making clear to house members this would not happen, Republican votes in the house caved and let the budget pass without Medicaid Expansion. Not content with the win, it appears taunts seemed appropriate.

Xu, a Democrat from Westwood, and an assistant said they saw Patterson waiting in a doorway that leads to House leadership offices. They said Patterson looked directly at Xu, placed his hands together and leaned forward in a bow, which Xu interpreted as a gesture reminiscent of 1940s propaganda that reduced Asian-American people to caricatures.

After winning election in November, Xu became the first Asian-American lawmaker to serve in the Kansas House. Xu said he was concerned that someone would make a gesture based on what he looks like.

“Growing up, I never had anybody like me in a position of power, and I’m finally able to be a voice to amplify,” Xu said. “It would be a dereliction of duty, actually, for me to just let this slide.”

Patterson insisted because his wife is from El Salvador, he was very sensitive to offensive gestures, and despite being witnessed by another person nearby, he wouldn’t condone such activities. In the course of a single interview, Patterson goes from saying he didn’t do such a thing, to saying hey, he didn’t mean to offend anyone, and he’d apologize if someone was offended.

Just to be clear: a lot of people ARE offended. And not just by him using racist taunting, but him thinking it was an appropriate response to cover for the cowardice of his boss by twisting arms preventing a vote on Medicaid Expansion.