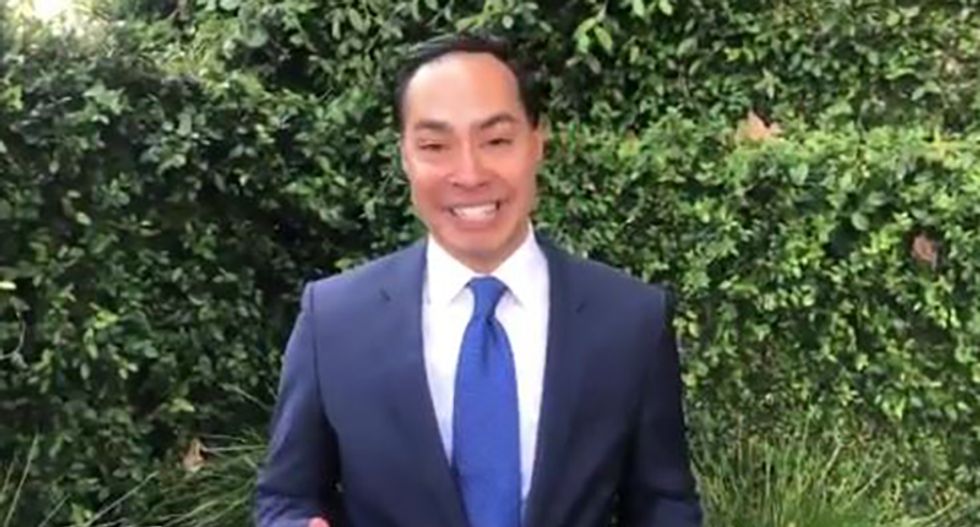 Julián Castro image via Twitter page
Patrick Svitek
and
The Texas Tribune
May 13, 2019

Democratic presidential contender Julián Castro on Monday released an education plan that would create a national pre-K program and get rid of tuition for public colleges.

In the second policy rollout of his campaign, the former U.S. housing secretary — still searching for an edge in the crowded 2020 field — said he was offering a "sweeping new approach and commitment" to education at the federal level. His People First Education plan, he promised, would establish a "seamless continuum" from pre-K through high school and beyond.

The proposal calls for a "universal, high-quality, publicly-funded, full-day Pre-K for USA program for three- and four-year-olds" — an expanded, national version of the Pre-K 4 SA initiative that Castro spearheaded as San Antonio mayor in 2012. That program offers high-quality, full-day pre-K to 4-year-olds on a first-come, first-served basis.

Pre-K for SA, which San Antonio voters will have the chance to renew in 2020, required a small sales tax increase, while Pre-K for USA would be funded by a grant program to state and local governments.

Castro's plan would also nix tuition at public colleges and universities, community colleges, and technical and vocational programs. To achieve tuition-free higher education, the proposal says it would "share the financing of tuition costs with state governments and provide incentives to reduce the cost of college programs."

Also on higher education, the plan aims to dramatically rein in student loan debt by allowing borrowers to make a healthy living before having to worry about loan payments. Under the proposal, a borrower would make $0 monthly payments until they are earning above two and a half times the federal poverty level — $64,375 for a four-person household, for example. And even then, payments would be capped at 10% of the income they make above two and a half times the poverty level. Finally, after 240 payments, including the $0 installments, the borrower would receive non-taxable forgiveness on the remaining loan.

Among the plan's other pieces: a $150 billion investment in modernizing schools, a federal tax credit that aims to increase teacher pay as much as $10,000 per year and steps to address inequities in the classroom, such as requiring unconscious bias training for all school employees.

Castro's campaign estimates that the plan costs about $1.5 trillion. A spokesman said Castro would pay for it by rolling back the 2017 Republican tax cuts, which he would replace with a "more fair tax plan" to be released at a later date.

The education proposal comes about five weeks after Castro unveiled a similarly named People First immigration plan, which remains the only platform of its type in the field. But with the education blueprint, Castro is wading into more competitive territory, particularly when it comes to higher education — already an intense focus of primary opponents including U.S. Sens. Bernie Sanders, I-Vt., and Elizabeth Warren, D-Mass.

The policy announcements have come as Castro continues to look for an advantage in a nominating contest where he has consistently polled near the back of the pack — though he recently hit the 65,000-donor threshold that secures him a spot in the first primary debate next month.

Castro teased the education platform during a visit to Iowa last week. Speaking with reporters after a stop Tuesday in Ames, Castro acknowledged Warren has led the field in releasing policy ideas, though he said he sees opportunity for himself as well as other candidates to distinguish themselves with their own proposals.

"I give credit to Sen. Warren. She's come up with compelling policies in a number of areas, but so have others," Castro said, citing Cory Booker's proposal to combat gun violence and Kamala Harris' ideas to boost teacher pay. "All of us have a role to play in moving the conversation forward on the policy that's going to make more prosperous in the years to come."

The other Texan in the race, Beto O'Rourke, released the first policy proposal of his campaign — a plan to fight climate change — two weeks ago. Castro called O'Rourke's climate platform "very promising" and said he would release his own in the coming months.