It's time for Democrats to fight, or surrender. History will judge them 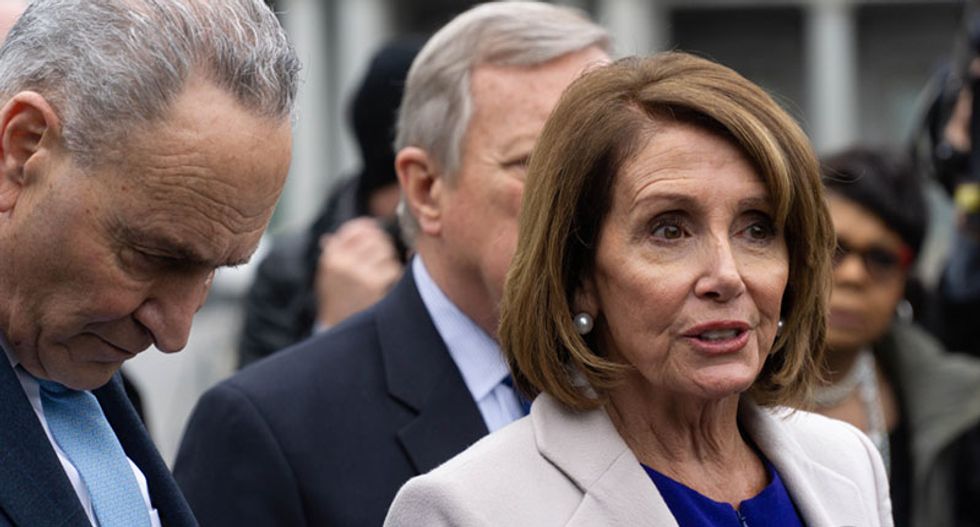 "If you don't stand for something, you'll fall for anything," as an old piece of political folk wisdom holds. The Democratic Party has apparently not learned this lesson. This is why (among other reasons) Donald Trump will likely defeat the Democratic nominee — whoever that may be — and win the 2020 presidential election.

On Wednesday, Attorney General William Barr testified before the Senate Judiciary Committee about his handling of special counsel Robert Mueller's report about obstruction of justice and Donald Trump and his inner circle's collusion with Russia.

Barr again showed himself to be Donald Trump's henchman and a man who does not serve the American people or the rule of law. In that role, Barr basically argued that Donald Trump is a king who is above the law; repeatedly lied and misrepresented Mueller's findings; deflected what Mueller in (now) two separate letters has communicated as serious concerns about how Barr distorted the findings of the Trump-Russia investigation; and in total sullied the office of the attorney general and the Department of Justice.

Barr and the Trump regime have contempt for basic democratic norms such as checks and balances. As such, Barr refused to testify before the House Judiciary Committee on Thursday.

Political consultant David Rothkopf described the importance of Barr's testimony before the Senate this way:

I don’t think we fully realize the profundity of Barr’s assertions yesterday. The ideas that a president can determine whether or not he ought to be investigated or that a president is incapable of committing obstruction are not just outrageous assaults on Constitutional values.

Taken in the context of this administration’s systematic rejection of the oversight role of Congress and of the law — whether it is the emoluments clause of the Constitution or the obligation of the IRS to hand over tax returns to the Chairman of the Ways and Means Committee — what we are seeing is nothing less than a coup, to use a word the president has grown fond of. Trump and Barr are seeking to eliminate the checks and balances that are a hallmark of our system and to effectively render the Congress subservient to the presidency.

This was less a story of the Democrats forcing Barr out of the shadows and shaming the devil than of Barr showing the world, out of his own hubris, who he really is — Trump's vassal and human puppet.

How did Senate Democrats respond to this? With somewhat flummoxed but generally polite annoyance. There was little if any fury and fire given Barr's behavior and the threat to American democracy he represents.

The Democrats have made several claims about Donald Trump's regime. They have repeatedly and correctly asserted that Trump is an authoritarian who has no respect for the rule of law. They have correctly explained that Trump is a racist, nativist, misogynist and bigot who wants to overturn America's multiracial democracy. The damning findings of the Mueller report aside and how it depicts an out of control and dangerous president, Democrats have also been correct in explaining how Trump's public and private behavior show a pattern of high crimes and misdemeanors, including obstruction of justice, apparent financial crimes, and other corrupt behavior.

So after today, if we didn’t before, we see now with a new and oddly liberating clarity where this is headed. It’s 18 months until Election Day. They may well be the most consequential and frightening stretch in the history of the country, or at least since Reconstruction.

This racket known as a political party will try to pervert the law in ways we’ve never seen. Reverse the meaning of every word we know. Trump is screaming that he’s the victim of a “coup.” What he is doing, of course, is perpetrating a coup, against the Constitution, with the eager help of Barr and Graham and all the rest of them. Trump is an idiot, but on some intuitive level, he’s a smart man, smart enough to know that to get away with staging a coup, the very first thing you have to do is to accuse your opponents of trying to stage one.

Yet the Democratic Party's leaders, Nancy Pelosi and Chuck Schumer, have now signaled that they are open to working with Trump's regime on a $2 trillion infrastructure package. If the Democrats actually believe their own arguments against Trump, they should be doing everything within their power to stop him. Moreover, they should refuse to cooperate with Trump and the Republican Party on any legislation. To do so only gives Trump legitimacy, which in turn empowers him even more. Unfortunately, it would seem that Democratic leaders are only too willing to help America's Mussolini keep the trains running on time.

As Politico reported this grand bargain:

After a 90-minute Oval Office meeting to discuss a potential infrastructure bill, both sides gushed about what may have been their first point of agreement this year, on a plan to spend $2 trillion to repair crumbling roads and bridges. Never mind that they left unresolved how to foot the gigantic bill.

There’s at least one explanation: Both Trump and Democrats are eager for a legislative win — or short of that, the appearance of genuine legislative effort — before the 2020 elections. Trump is about to embark on a tough reelection campaign with key promises, including a grand infrastructure plan, still unmet. Democrats are eager to pivot from the subject of Russia to more tangible issues like the economy, and to provide swing-district moderates with talking points about bipartisan action.

This proposed infrastructure bill reflects an almost fatal character flaw in today's Democratic Party, where compromise and "moderation" are placed above principle and doing the right thing.

It is a symptom of the desperate need by the Democratic leadership (and too many of its elected officials and rank-and-file members) to always appear as "reasonable" and as being "the adults in the room." This weakness has allowed an amoral  conservative movement to drag the Democrats farther and farther to the right over the last few decades. The Republican Party's political hostage-taking and authoritarianism is almost always never punished. In practice this means that Democrats encourage and reward such bad behavior, like a parent who gives a treat to a bratty child to stop a temper tantrum. President Donald Trump, the adult baby tyrant-in-waiting, is the result.

What should the Democratic Party do in response to Donald Trump's reckless disregard for the Constitution, democracy, and the rule of law? It's simple: Trump should be impeached immediately.

Strategically and tactically, such a move will give the Democratic Party a clear issue and message to focus on. Contrary to a common objection that a failed impeachment process will weaken the Democrats, history actually shows that when  Republicans impeached Clinton — and failed to convict him — that actually put the Republican Party in a stronger position going forward.

Yes, Donald Trump is an almost unique threat to American democracy, who will almost certainly use impeachment to fuel his conspiracy theories and to cement even more power over his political cult members. But impeachment would also show the American people and the world that Trump will be actively opposed and resisted by any and all means available. The merits of the latter outweigh the concerns about the former.

Impeaching Donald Trump would also allow the Democrats to lead on this issue, rather than remaining prisoners to the mercurial whims and moods of public opinion. A majority of the American people are desperate for a leader who will stand up against Donald Trump and the Republican Party. The Democrats have not seized that mantle.

And most worrisome of all, the longer the Democrats delay impeachment the more Donald Trump, the Republican Party and their captive media can condition the American people into relative indifference about Trump's crimes against American democracy.

Most important, impeaching Donald Trump is the moral and ethical thing to do. Trump is a living, textbook example of why the framers enshrined in the U.S. Constitution the power of Congress to remove an unfit president from office. As House Judiciary Committee chair Jerry Nadler said yesterday, "The choice is simple: We can stand up to this president in defense of the country and the Constitution and the liberty we love, or we can let the moment pass us by. ... History will judge us for how we face this challenge."

Of course the Republicans are focused as always on "winning" and acting without restraint in the service of that goal. They are already planning their next battle in their assault on the Democratic Party and the rule of law. Trump and his Republican Party's skulduggery makes impeachment even more necessary.

All of these developments form the backdrop of a scheme to knock out the Democratic candidate Trump is known to fear the most. Trump associates have been unusually frank, without seeming coy, about their concern that Biden could defeat Trump in the general election, and they would apparently like to neutralize the threat by embroiling Biden in a politically motivated criminal investigation.

This isn’t a clever strategy, but it is blunt and chilling, and, if successful, can and will be repeated to hobble whichever Democrat Trump fears second most, and ultimately on whichever Democrat wins the party’s 2020 presidential nomination.

Beutler concludes that this is "elementally impeachable conduct," designed also "to cow the famously impeachment-phobic opposition party into inaction." Democrats could short-circuit all this by impeaching Trump immediately, but "have instead chosen to communicate to Trump that all of these improprieties are acceptable — and less than a month after the Mueller report became public, their paralysis has uncorked Trump’s authoritarian desires. ... And the worst part is that Barr has been Trump’s attorney general for only two and a half months — which means they’re just getting started."

The Democrats must impeach Donald Trump, and must offer no quarter or compromise to Donald Trump and his party on any issue. To do anything less is to guarantee defeat in the 2020 election and likely a full-on surrender of America's democracy.

Are the Democrats strong enough and committed enough to do such a bold thing? Or will they instead default to compromise and surrender, as they have almost always done in the recent past? The next few weeks will provide the answer.
Report typos and corrections to: feedback@alternet.org.