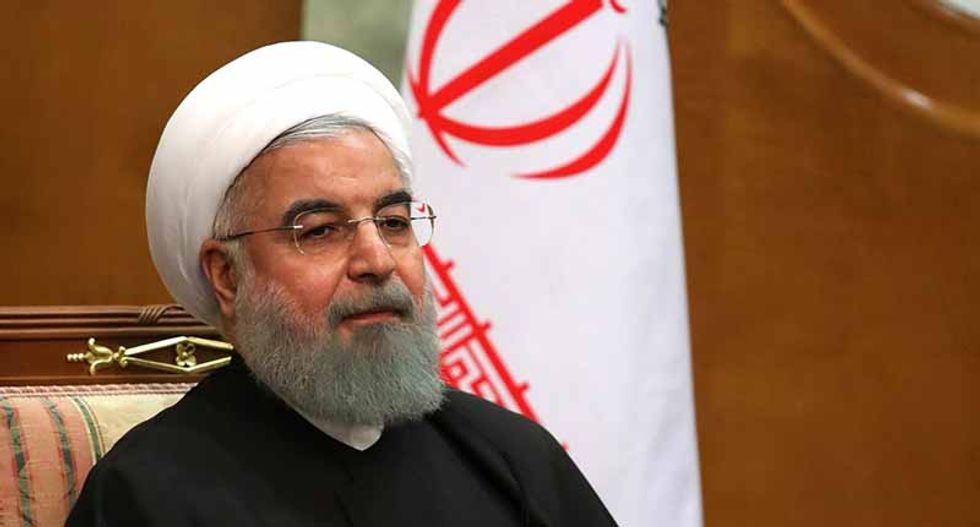 Image via Shutterstock.
Jake Johnson
and
Common Dreams
May 08, 2019 World

In the face of belligerent threats of war from the Trump administration, Iran on Wednesday took what some observers described as rational steps to reduce compliance with the nuclear accord to pressure European nations to live up to their end of the deal.

"The path we have chosen today is not the path of war, it is the path of diplomacy," Iranian President Hassan Rouhani said in a speech Wednesday, which marks the one-year anniversary of U.S. President Donald Trump's violation of the nuclear agreement.

"It is not us who has left the negotiation table," Rouhani added.

The Iranian president said European signatories of the nuclear accord have 60 days to negotiate new terms that would mitigate the impact of crippling sanctions imposed by the U.S. If the 60-day deadline is not met, Rouhani said, Iran will end limits on uranium enrichment.

Worth noting that Iran, who hawks keep insisting is a crazy irrational regime that can't be negotiated with, is res… https://t.co/WlGxrXkn5n
— Matt Duss (@Matt Duss) 1557317056.0

Jamal Abdi, president of the National Iranian American Council (NIAC), expressed concern about the Iranian government's decision to begin pulling back from the nuclear accord—but noted the move did not "occur in a vacuum."

"Donald Trump, spurred on by John Bolton and [Secretary of State] Mike Pompeo, has been trying for months to shatter the nuclear deal," Abdi said in a statement. "Now, he will own the consequences of Iran resuming aspects of its nuclear program."

Abdi highlighted the startling similarities between Trump's escalation of tensions with Iran and the George W. Bush administration's rhetoric and actions in the run-up to the Iraq invasion.

"Members of the Trump administration appear to be repeating the George W. Bush administration's playbook for war with Iraq—tying Iran to al-Qaeda, baselessly stating that Iran is pursuing nuclear weapons, and politicizing intelligence assessments on Iran," said Abdi. "Bolton has gone into overdrive in recent weeks to spur Iranian retaliation to justify his reckless aggression."

Since Trump withdrew the U.S. from the Iran nuclear accord last year, the Trump administration has repeatedly threatened Iran with military action and intensified punishing economic sanctions in an effort to "foment unrest" inside the country.

NIAC founder Trita Parsi said in a series of tweets Wednesday that Iran's decision to take concrete steps in response to the Trump administration's hostile and dangerous behavior is "not surprising."

"It is surprising that it's taken Iran so long to take this step," Parsi said. "Trump had created a bizarre situation in which Iran was more sanctioned for abiding by a nuclear agreement than it was when the U.S. accused it of violating one."

Parsi noted that Iran is clearly attempting to uphold the nuclear agreement to which it has abided since its implementation in 2015:

But Iran’s strategy is clearly not designed to facilitate an exit from the nuclear deal, but to compel Europe to de… https://t.co/R4hqmTbAyD
— Trita Parsi (@Trita Parsi) 1557315172.0

"The Iran deal closed off Iran's paths to a nuclear weapon," said Parsi. "Now, a year after Trump pulled out, Iran is acting on its warnings that it cannot uphold the agreement unilaterally. As such, Trump has initiated a chain reaction that will make America and the world less safe."