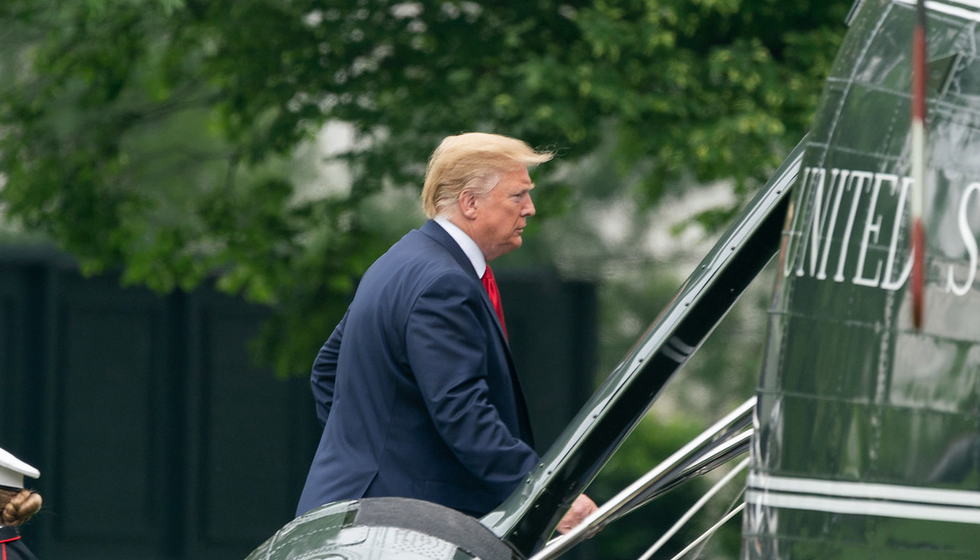 It has been a disastrous week for President Donald Trump's foreign policy.

First, the markets tumbled on the news that the administration is planning to slap higher tariffs on China, despite earlier indications that trade talks had been proceeding productively. The Wall Street Journal reported Thursday that the new bump in the road came when the Chinese government sensed weakness on Trump's part:

...Beijing interpreted recent statements and actions by President Trump as a sign the U.S. was ready to make concessions, said people familiar with the thinking of the Chinese side.

High-level negotiations are scheduled to resume Thursday in Washington, but the expectations and the stakes have changed significantly. A week ago, the assumption was that negotiators would be closing the deal. Now, they are trying to keep it from collapsing.

The negotiations are hardly going according to plan, revealing the shallowness of Trump's boasts of being a master dealmaker. That means his tariffs, which he falsely claims mostly hurt the Chinese, will worsen and continue to hurt American businesses, workers and consumers. Meanwhile, as economist Tyler Cowen persuasively argued in Bloomberg, the intent behind the trade talks is likely fatally misconceived from the start: Almost any conceivable deal would likely allow the Chinese practices that Trump complains about to persist.

The Trump administration's position on Venezuela is no more promising, Trump and his aides have gone all in on backing the opponent to authoritarian President Nicolás Maduro. After a contested election, Juan Guaidó has tried to wrest control of the country from Maduro with the Trump administration's vocal backing. His effort to seize control of the military and oust Maduro last week, however, was a bust.

The Washington Post reported Wednesday that even Trump seems to realize his administration's position — which, despite legitimate criticisms of Maduro, echoed a long and disastrous history of American intervention in Latin American politics — was an embarrassing failure:

Trump has said that Maduro is a “tough cookie” and that aides should not have led him to believe that the Venezuelan leader could be ousted last week, when Guaidó led mass street protests that turned deadly.

Instead, Maduro rejected an offer to leave the country and two key figures in his government backed out of what Bolton said had been a plan to defect. Maduro publicly mocked Trump in response and said he wasn’t going anywhere, saying the United States had attempted a “foolish” coup.

Trump appears to have been led into this mess by National Security Adviser John Bolton, who both critics and the president himself seem to agree is a warmonger. And it's not just Venezuela that's been in Bolton's sights — he's even more bound and determined to start a war with Iran.

While Trump was lashing out at China, Bolton has been saber-rattling with Iran. Having labelled the Iranian Revolutionary Guard Corps a terrorist organization, Bolton and the administration are keen to interpret any response from the regime as a provocation. So on Sunday, Bolton announced that the U.S. would be sending carrier strike group and a bomber task force to the Persian Gulf out of fear that Iran would target American forces in the region. But the Daily Beast reported that some officials see this response as an overreaction to intelligence that was less serious than Bolton suggested — an allegation that would be consistent with the national security adviser's aggressive and dubious history, which eventually even turned President George W. Bush against him.

Speaking of the ongoing tensions with Iran, Trump said Wednesday: "I hope to be able at some point, maybe it won't happen, possibly won't, to sit down and work out a fair deal, we're not looking to hurt anybody."

He added: "We just don't want [Iran] to have nuclear weapons."

Of course, if that were the goal, Trump could have just stayed in the nuclear deal with Iran negotiated under President Barack Obama that subjected the regime to strict oversight of its nuclear capacity and held the potential for retaliatory sanctions the deal was breached. Instead, after campaigning against it, Trump broke the agreement. It's not clear what reason Iran would have to want to negotiate with Trump now.

But with the U.S. having broken its end of the bargain, Iran is backing away from the restrictions it had decided to place on its nuclear programs — even if it's not outright violating the terms of the deal yet.

So it's not clear at all what benefit the United States has gotten out of abandoning a deal that Trump now wants to replicate, even as Bolton is on the sidelines appearing to try to orchestrate a scenario that could justify a strike against Iran. Trump has repeatedly said he wants to avoid unnecessary foreign conflicts, but he may carelessly let Bolton take us there anyway.

And where Trump takes the lead in foreign policy, he hardly fares much better. The one area where Trump really has appeared to carve out his own, novel strategy is his diplomatic relations with North Korea. And it's better an utter failure.

Trump has met with and praised the country's monstrous dictator Kim Jong-un, repeatedly downplaying his oppression of the North Koreans and seeming to brush off the killing of American Otto Warmbier. After two summits that made no progress in actually addressing the problem of Kim's nuclear arsenal, and having given the dictator the seat on the global stage that he craves, Trump said the two have "fallen in love." He also declared that the nuclear threat from North Korea has been ended — a view shared by no experts in the region, or even, it seems, by Trump's own advisers. Trump has essentially staked his own global credibility on the good faith of malevolent tyrant.

And this week, Kim is clearly taking advantage of Trump's weakness. North Korea launched two more missiles this week, despite Trump previously boasting about the fact that his negotiations had led to "no Rocket or Nuclear testing." And on Thursday, the Justice Department announced that the U.S. has seized a North Korean ship for allegedly violating sanctions. Clearly, Kim is testing his limits with Trump, knowing that diplomatic failure will be an embarrassing stain on Trump's reputation.

When Trump has tried to exert his own will elsewhere on foreign policy, he's likewise failed. Despite all the fulmination about Russia, and Trump's personal chumminess with President Vladimir Putin aside, American relations with the country haven't been fundamentally altered by the presidency. And despite overt efforts, Trump has been unable to actually withdraw American troops from Syria or Afghanistan.

One place the Trump administration really has had foreign policy success is in defeating ISIS, which has been significantly beaten back under his watch. But Trump is largely the beneficiary of timing here. The military has largely carried out the same strategy Obama had been pursuing — Trump never had a "secret plan to defeat ISIS" as he claimed.

“Whatever successes the Trump administration is claiming against ISIS are actually a product of the Obama administration’s approach,” Jennifer Cafarella of the Institute for the Study of War told Vox.

It's not a surprise that Trump's foreign policy would largely be a dud. He demonstrated throughout the 2016 campaign that he had little understanding of world (or domestic) affairs — and more, importantly, he had little interest in learning. He has simply flailed from one issue and approach to another while burning bridges with allies, weakening the United States' global standing in immeasurable ways.