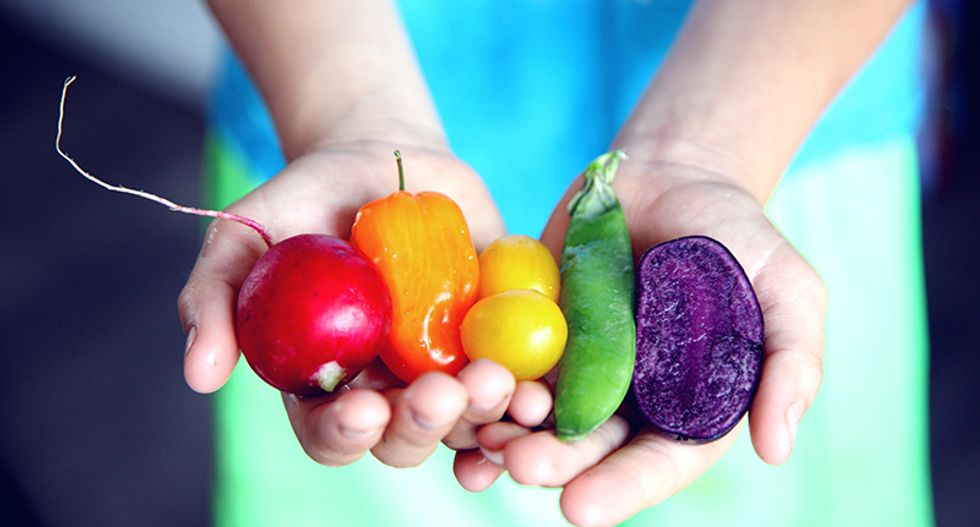 Kathy Freston is a New York Times bestselling author four times over. Her books on healthy eating and conscious living include The Lean, Veganist and Quantum Wellness. She considers herself a wellness activist and has appeared frequently on national television.

All this, and yet, she’s not strident or bossy. She wouldn’t dream of making me feel bad if I sprinkled parmesan on my pasta. She somehow understands that I can’t seem to give up my cow’s milk lattes.

“I’m a big believer in progress, not perfection,” says Freston. She offers easy, manageable ways to ease into a more plant-based diet. Freston takes a compassionate, no-guilt and shame-free approach to omnivores who try to reduce their meat consumption but who are maybe not on board the vegan train.

Freston’s gentler approach is exactly what I aim to do with my children’s books, Sprig the Rescue Pig and Gwen the Rescue Hen. It’s also why I found her “SuperSoul Conversations” interview with Oprah so important and reached out to her afterward to ask her some questions of my own.

Leslie Crawford: You take an unusually gentle approach with people who aren’t vegetarians or vegans. Is this really an effective approach?

Kathy Freston: I realized that if someone lectured or shamed me, I’d probably reject the message and not have developed any of my own insights, whereas when I talk to people who are nonjudgmental, I’m an open receiver. So, I decided to share the message the way I like it to have done with me.

Your dog was instrumental in your conversion to becoming a vegetarian and then a vegan. Tell us about your “ah-ha!” moment.

I had received a pamphlet in the mail from some animal organization depicting a cow being dragged to slaughter. It hit me hard, and I didn’t know what to do with that. Later, I was playing with my dog Lhotse, and she was lying on her back and looking up at me. When I looked back at her, [I] suddenly imagined her being lined up for slaughter and considered how she’d feel. I thought, If I don’t want my dog to go to slaughter, why would I want any animal to go to slaughter? As you know, a dog is no better or worse than any animal.

You talk about how becoming vegan is a process. I think some people think it’s just too hard because they have to entirely change the way they eat in order to become one.

It’s a process for several reasons. One is that our culture has effectively numbed us to what’s happening to animals. We are told it’s normal, natural and necessary. From early childhood, we’ve been indoctrinated with the idea that it doesn’t matter how we treat farm animals. It takes a while to get over that indoctrination.

Finally, it’s about being resourceful. It takes a while to find your footing: what to make for dinner, how to shop, how to please your kids. All those things work in tandem. If you give yourself time and space to figure this out, anyone can do it.

I’m getting there, and this may sound silly, but I’m having trouble giving up cow’s milk lattes.

Try the 21-day rule. It’s easy to change a habit in that amount of time. So for 21 days, try soy milk or oat milk — whatever it is you want to use as a replacement. It might not be great the second or third day, but once you get in the habit of something, you can change.

We talked about how shaming people for eating meat doesn’t work. I’ve found that meat-eaters also try to shame vegetarians and vegans. Have you experienced this?

That happens all the time. I remember a dinner party with some VIP people. The host was serving meat and cheese, and I just quietly said, “No thank you. I’m good with what I have.” I’d already told the host I’m a vegan, so not to worry about getting an extra steak or fish. When I said “no thank you” to the third thing she offered, she told me, “You’re so boring!” I was so humiliated. The last thing I want to do is make a spectacle of myself.

That was a while ago. Now I just think, “Oh my goodness,” but I don’t get upset. I don’t like to get into arguments.

Any other tips for moving over to a more plant-based diet?

This is a movement about kindness. If you come from that place, the changes stick. But if you force yourself and hate it, it won’t stick. We are looking for long-term change.

Once you take the pressure off, you can lean into changing. My intention was to become someone who no longer eats animals. I knew it wouldn’t be easy. I grew up eating meat three times a day. But I allowed myself to become curious and went to see what I could find at the grocery store. All of this creates momentum, and I just leaned into it.

Plus, nowadays, there are so many plant-based meats — so many great products to choose from.

Many parents, including me, struggle with trying to raise kids vegetarian or vegan. Advice?

Find what a child actually likes rather than forcing something. Sometimes it’s Gardein chicken fingers or a vegan burger or [vegan] cheese. I’m a big lover of smoothies, and you do want to get good nutrition. You can put in frozen broccoli, blueberries, protein powder. But don’t worry about being uber-healthy right away. Start by finding some things they like and build from there.

Consider taking them to a farm animal sanctuary. There are great books to have on hand: Dr. Joel Fuhrman wrote one called Disease-Proof Your Child: Feeding Kids Right. Your books Sprig the Rescue Pig and Gwen the Rescue Hen are wonderful. Brava! I can’t wait to see them in every kid’s hands.

Here’s further advice from Freston taken from her own writings:

Lean into plant-based eating: Take it a step at a time. For example, you could start by abstaining from eating small animals such as chickens and fish, then cutting all large animals (cows and pigs) from your diet.

It’s also okay to be vegan-ish: So you eat cheese now and then, but you have cut out all other animal products. Allow yourself these small things, and applaud what you’ve already done.

Eat consciously: Conscious eating is being aware of where your food came from. Consider the 9.47 billion land animals who suffered and were killed for food in 2017. Think: 10 steps before it got to me, what did this single animal experience? It helps to think small as well because the vast number of animals slaughtered for our food can be so unfathomable. Think of that one chicken, that one animal. What did that creature experience on her way to my dinner plate? Am I all right with that just so I can have my chicken sandwich?

This article was produced as part of a partnership between Stone Pier Press and Earth | Food | Life, a project of the Independent Media Institute, and originally published by Truthout.