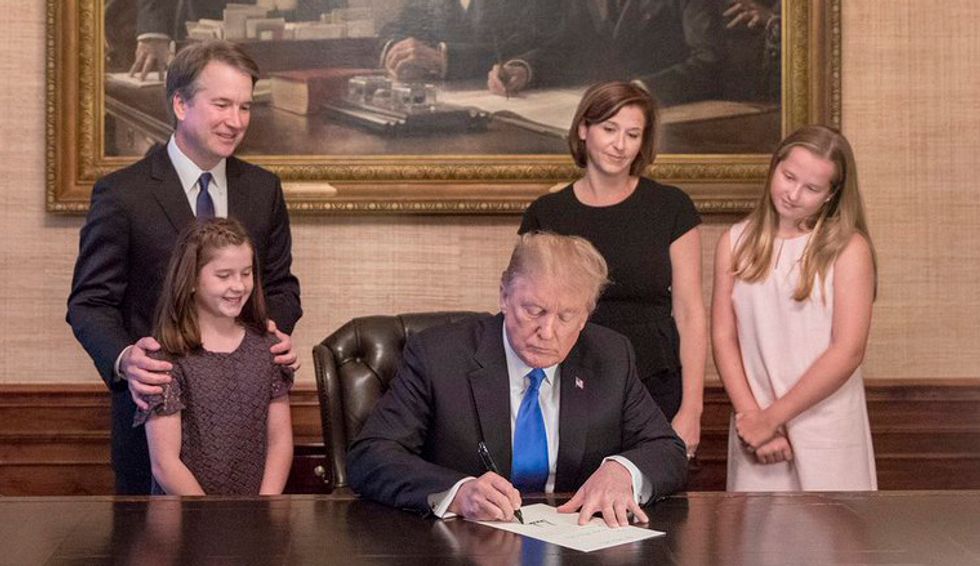 Image via Wikimedia Commons.
Tom Boggioni
and
Raw Story
May 28, 2019

In a column for the Daily Beast, columnist Michael Tomasky suggested that Donald Trump’s defiance of congressional subpoenas and demand for oversight could easily end up being reviewed by the Supreme Court. But Tomasky thinks even if the court rules against him, Trump will still not comply.

Noting that Trump has shown nothing but contempt for congressional committees headed by Democrats now that they control the House, Tomasky claimed he saw no reason to believe that Trump will show any deference to the opinion of the judicial branch of the government if things don’t go his way.

“Right now, the House Democrats are trying to subpoena Trump administration officials to come testify. Trump officials, under his orders, are refusing to comply. Obviously, this will end up in the courts, probably eventually the Supreme Court,” Tomasky wrote. “But let’s say for now that the courts rule for Congress. That the Supreme Court itself, with John Roberts joining the four liberals, rules for Congress. A great day—then: Don McGahn and Hope Hicks the whole lot of them will have to testify. Right? Wrong. Trump will order defiance of the Supreme Court.”

According to the columnist, Trump would immediately make Chief Justice John Roberts a target for his rabid fans.

That, of course, would be the least of Robert’s problems — because Trump would take it further by just ignoring the Supreme Court like he does anyone who tries to rein him in.

And therein lies a big problem for Americans who believe in the rule of law.

“The Supreme Court has no enforcement powers. Its only enforcement powers repose in the Constitution (and the power the court gave itself in Marbury v. Madison), and in the sense of shame or duty or civic decency or whatever you wish to call it of most Americans. It has neither sword nor purse, as Alexander Hamilton put it,” Tomasky elaborated.

He then pointed out that “duty or civic decency” are qualities Trump woefully lack, writing, “We have a president who knows no shame and has zero sense of duty or civic decency. So he will disobey the courts. Count on it. This will be a serious crisis of the Constitution: a president disobeying an order of the Supreme Court. And this isn’t necessarily some distant thing. It could happen soon—this summer.”

That, Tomasky predicts, would lead to only one solution: impeachment by a GOP-controlled Senate that wants no part of giving up the power of the Oval Office.

“People who want impeachment hearings yesterday seem to think they’ll change things. They won’t change anything,” he wrote. “Trump will deny and defy customs and laws and yes, even a ruling of the Supreme Court, until he’s absolutely out of options—meaning, until Mitch McConnell and Lindsey Graham tell him the ballgame’s over, and it’s hard right now to see that day coming anytime soon.”

“Trump will destroy Congress and the Supreme Court if he feels he needs to. The only question is: Will Republicans let him do it? “he concluded.