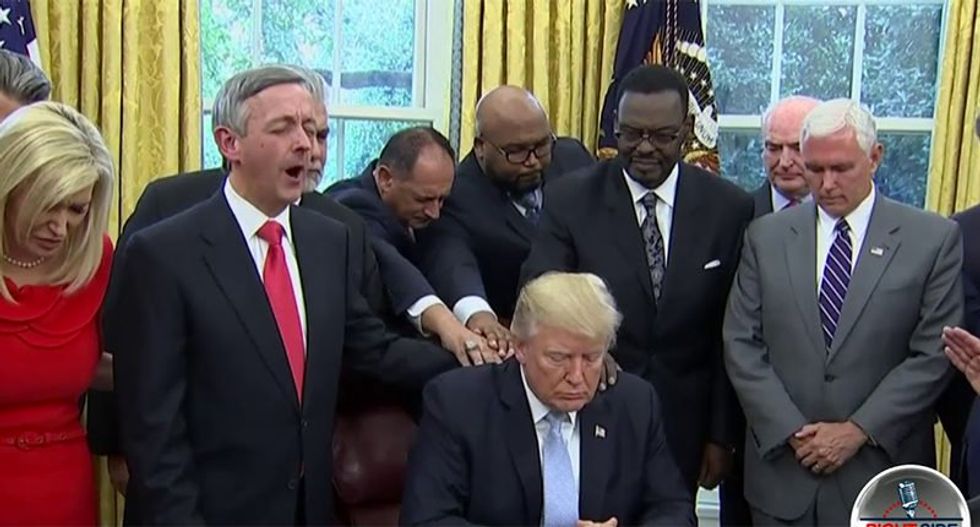 The strange alliance between President Donald Trump and US evangelicals became a bit more clear this week when it was revealed that Trump’s former fixer, Michael Cohen, had made sex pics related to an affair by Jerry Falwell Jr. disappear. Falwell endorsed Trump soon after.

A recent Pew Research poll found that 69 percent of white evangelicals approve of how Donald Trump is handling his job as president of the United States.

Here’s a list of things evangelicals ignore about Donald Trump as they continue to support him in high numbers.

Trump’s fixer Michael Cohen paid off at least two women, Stormy Daniels and Karen McDougal, to stay quiet about affairs with Trump ahead of the election.

In addition to openly boasting about cheating on his wife, Trump famously told Billy Bush that when you’re famous women “just let you grab them by the pussy.” Multiple other women have come forward accusing the president of forcibly kissing them.

3. The lack of religiosity

Although President Trump officially identifies as Christian, there’s very little evidence that he’s ever been a serious man of faith.

Contrary to the teachings of the New Testament, which urges Christians to help those most vulnerable, Donald Trump has taken a hardline zero-tolerance approach to migration, separating kids and parents at the border.

One of President Donald Trump’s first orders of business was to try and institute a travel ban targeting Muslim-majority countries. On the one hand, some US evangelicals might harbor anti-Muslim sentiment. On the other hand, the policy — in addition to being a breach the Constitution — defies New Testament teachings about helping vulnerable people.

A feature of US Christianity is that so-called ideology of “prosperity,” the idea that wealthy people earned their wealth and are therefore rewarded by God. But a recent New York Times investigation revealed that Trump was far better at losing money than at earning it. In fact, although Trump’s father Fred was a successful businessman, the report showed that one of his few losing ventures was investing in his son.