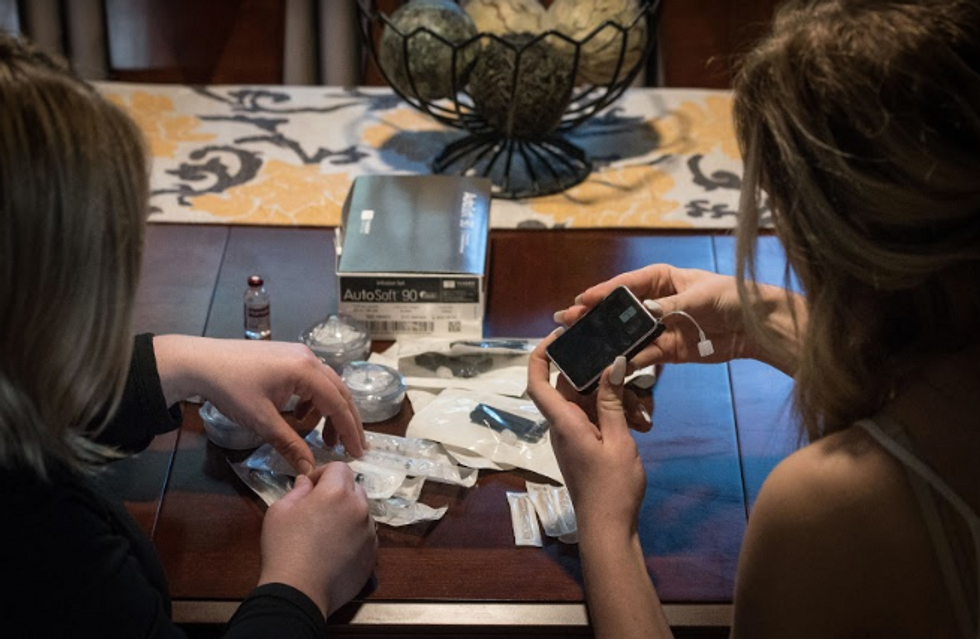 Nichole and her daughter, Elizabeth, with some of Elizabeth’s current pump supplies. Photo by Steven Dietz. Used with permission from the United Steelworkers Union.
Leo W. Gerard
,
Independent Media Institute
and
Leo W. Gerard
May 09, 2019

Michelle was overwhelmed. She knew they were meeting that day so that the mother and daughter could give her medical provisions she needed to stay alive, but she had not realized it would be thousands of dollars’ worth until she saw those bags.

“We didn’t know how big of a deal it was until she started crying,” the teenager, Elizabeth, said later.

Elizabeth and her mother, Nichole, had the extra supplies partly because they have exceptional health insurance coverage. They could get for a few dollars what it had cost Michelle $6,000 to buy the year before. Increasing numbers of Americans like Michelle are confronted with fear and debts because their employers are dumping on them skyrocketing pharmaceutical, health care and insurance costs.

The big difference between the two young women with diabetes, Elizabeth and Michelle, is that Michelle’s father, whose health insurance covers her for another few months, is not a union member and Elizabeth’s father is.

Elizabeth and Michelle experienced the onset of diabetes similarly, though Michelle was a little older at 16. Elizabeth was 11. They lost weight for months for no reason. They were excessively thirsty and drank a lot of water. They were lethargic, and often felt like they had a bad cold or the flu.

On June 21, 2014, Elizabeth’s mother carried her into an emergency room. Elizabeth weighed only 59 pounds. Doctors diagnosed her with diabetes and rushed her to Children’s Hospital. In Michelle’s case, a friend’s father, a physician, suggested medical tests, and when Michelle’s doctor told her the results, she and her mother sobbed. Both Michelle and Elizabeth spent a week in the hospital where they learned that they would need a dozen or more needle jabs a day—injections of insulin and finger pricking to test blood glucose.

The fear for parents like Elizabeth’s mother, Nichole, is crushing. If their child’s glucose levels go haywire, fainting, seizures, coma and death can result. At the outset, Nichole woke Elizabeth up at midnight and 3 a.m. every night to check her levels.

For some parents, the expense of the disease adds exponentially to the anxiety. There are doctor’s appointments, tests, medical equipment and, crucially, insulin to pay for. Over the past decade, pharmaceutical corporations have tripled the price of the four most common types of insulin. Now, a month’s worth can cost more than $800, and that’s if nothing goes wrong, if a vial isn’t dropped or the child doesn’t get sick and need additional doses.

The high cost has provoked a dangerous response. Studies show a quarter of the 30 million Americans with diabetes are skipping or skimping dozes. That has killed some of those who rationed their medication because they couldn’t afford it.

It wouldn’t be surprising if Michelle, the young adult with diabetes, resorted to rationing. The bank her father works for provides its employees with shockingly bad health insurance. He pays about $600 every month toward the premium and still has a $6,000 deductible for family coverage, which means he must pay the first $6,000 in costs. Every year.

Employers are charging full-time workers increasingly ridiculous amounts for premiums, co-pays and deductibles. Over the past dozen years, deductibles for employer-based plans have quadrupled, and now average more than $1,300. Forty percent of workers in these plans report they don’t have sufficient savings to cover that amount. In fact, they may be among the 40 percent of American workers overall who say they do not have $400 to pay for an emergency such as a car repair or broken leg.

As a result, one in six Americans who have employer plans say they’ve made sacrifices to pay for health care, including cutting back on food, moving back home with parents and taking second jobs. Half say they or a family member skipped or delayed care or stopped taking prescription medications.

This could be why the audience at a Fox News town hall last month with Bernie Sanders, an advocate of Medicare for All, clapped and cheered loudly when Fox host Bret Baier asked if they were willing to relinquish their employer-based health insurance and take Medicare for All instead.

With a single-payer system like Medicare for All, every American would have the safety and security of health insurance. Prices overall would decline as overhead costs charged by private insurers disappeared. And, crucially, Congress could allow Medicare to bargain for lower pharmaceutical prices, as is done by Canada and other countries with universal health insurance.

The current administration is, however, moving in the opposite direction, trying to overturn the Affordable Care Act (ACA), which would end coverage for 21 million people, including young adults like Michelle, and which would permit insurers to once again deny coverage to people with pre-existing conditions like diabetes. Without offering a replacement, the Trump administration last week asked a federal appeals court to strike down as unconstitutional the entire ACA.

Michelle’s family is among those who faced onerous medical bills even though they have employer-based insurance. After she was first prescribed an insulin pump system last year, they had to borrow to afford the insurance plan’s $6,000 deductible, and although a new year with a new $6,000 deductible started January 1, they won’t be able to pay off the first loan until next month. “It is stressful when you have that crippling number hanging over you,” Michelle said.

She didn’t want her father to be out another $6,000 this year, so she has been driving to Canada where she can get the same insulin without a prescription for nearly one-tenth of the U.S. price. She didn’t refill her prescription for pump supplies and has been seeking donations instead.

She had received several with the help of underground groups that diabetics sustain. Facebook has mostly shut down their communication on that forum for fear of prosecution for abetting the illegal transfer of prescribed medication and equipment. Only the middle names of the three women involved in the gift of diabetes treatment supplies are used here for that reason.

Between the two plans, Elizabeth often is able to buy for $1 her whole monthly supply of insulin, which has a price tag of $832.82. She got three months of pump supplies, valued at $3,730, with no co-pay at all. Last year, Elizabeth’s father’s insurance company paid $36,727.32 for her insulin, supplies and clinic appointments.

Elizabeth’s mother, Nichole, estimates she paid less than $100 toward the cost. “I have never looked at what the total annual cost was before, and it took my breath away and made tears spring to my eyes,” Nichole said. “Having those labor contracts provide that first-rate health insurance means I only lose sleep at night worrying about my daughter waking up alive and not about how to come up with the $36,727.32 it takes to keep her that way.”

Elizabeth had the extra supplies to give to Michelle because her doctor prescribed a different type of pump for her. A pump system works better at stabilizing blood glucose levels than injections. So some patients are able to stock up on them over time to use in emergencies, such as when one would malfunction or a pump site would blow.

Michelle hopes the supplies she received will last until October. She turns 26 then and will no longer qualify for coverage by her father’s health plan. She is employed by the same bank he is, but as a contract worker, which means the giant corporation provides her with no benefits at all.

She and her fiancé plan to elope in August so that she can be covered by his health insurance plan by October.

Her fiancé is employed at a unionized workplace. He is a manager, so he isn’t a union member, but he receives the same health insurance and other benefits that the unions have bargained for. His health plan has an $800 deductible and a monthly premium of $36. And those fees do not increase when he and Michelle marry. They plan a formal wedding a year after eloping.

The union difference here is the chasm between a $6,000 deductible and an $800 deductible, a $600 monthly premium and a $36 premium. That difference means being able to afford a honeymoon or a car or a down payment on a house. It is the difference between risking death by rationing insulin and living with a properly medicated chronic condition.

Michelle said there is no way that she or her father, as individuals, could walk into the bank’s personnel department and negotiate for a better health insurance plan. It just wouldn’t work. But she said, “There is definitely power in numbers. Whenever there is a group of people, the company is more inclined to do it because they don’t want negative repercussions like a strike by the workers.”

For the past 70 years, however, some politicians, particularly right-wingers, have made it increasingly difficult for people like Michelle who see the value of labor unions to form them in their workplaces. At the same time, Michelle notes that her generation faces other difficulties, including high student loan debt, stagnant wages, prohibitive housing prices and outrageous health insurance costs.

Elizabeth, who is only 16, is concerned about what those insurance costs will mean to her when she’s an adult with diabetes needing insulin every day to live. “I worry,” she said, “whether I will have enough insurance to afford this stuff.”