Game of Thrones: An American parable 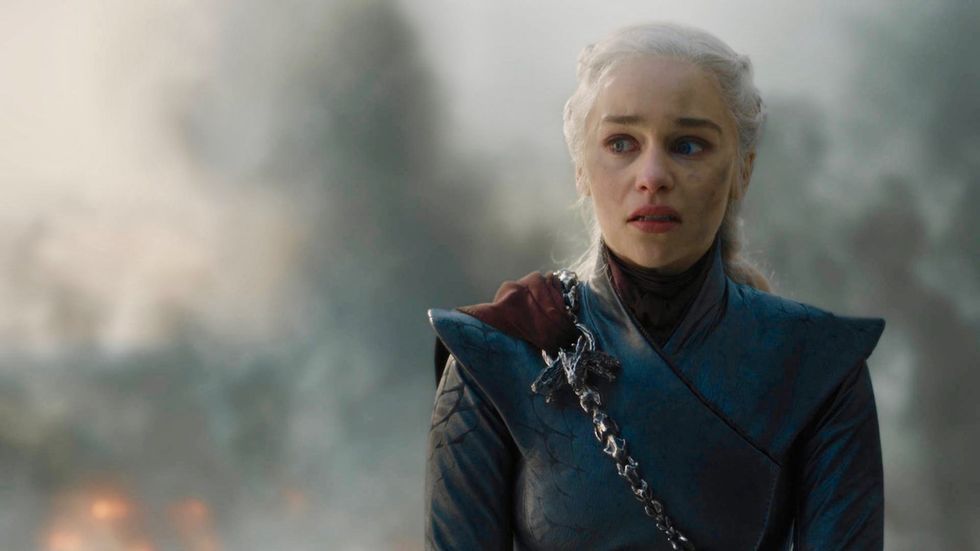 Even if you’re one of the few television viewers not watching “Game of Thrones,” you’re probably at least dimly aware of Dany and her dragons. From the merch to the memes to the rising number of babies who bear her name, Daenerys Targaryen (Emilia Clarke) is undoubtedly the most talked-about character on the show, her journey from meek and abused teen bride to conquering queen endearing her to the show’s most devoted fans. In an op-ed for New York Magazine last month, Massachussetts Sen. and 2020 Democratic hopeful Elizabeth Warren called her “my favorite from the first moment she walked through fire.”

But as was revealed Sunday, Daenerys was never really anyone’s hero. During the penultimate episode of the series’ final season, fans were shocked when Daenerys commanded her dragon to slaughter the people of King’s Landing, home of her rival, Queen Cersei Lannister, torching men, women and children as they ran for cover—this after the Lannister army and its allies had declared their surrender. It was an act of brutality that turned the fantasy universe of “Game of Thrones” into one of pure horror.

Dany devotees were apoplectic. They argued that such actions were completely out of character, that their proud and noble queen would never harm innocent civilians. More than 400,000 have signed a change.org petition demanding that HBO remake the final season with “competent writers.” As blogger Candace Aiston wrote, “I’m so [expletive] mad right now. Game of Thrones has been a waste of my life.”

But was this really a break in character? Or did Daenerys fans, including Warren, just have her wrong from the start?

While “Game of Thrones” is a wide-ranging soap opera whose creators, quality and tone change almost from episode to episode, one consistent theme throughout its eight-year run has been its intense skepticism regarding power. From the lore surrounding Dany’s father, the “Mad King,” to the lecherous Robert Baratheon to the incestuous Cersei to the ruthless Stannis and lecherous Walder Frey, nearly every feudal ruler in “Game of Thrones” is portrayed as despicable in one way or another. The various plots they participate in to gain or keep power usually result in the deaths of their friends, their families and themselves, along with untold scores of serfs who fight and die in their wars.

Daenerys was never an exception to the rule. Television viewers may have embraced her as a feminist hero, comparing her to such real-life politicians as Warren and Hillary Clinton, but throughout the series she was as vengeful, vindictive and cruel as any lord. Here are just a few of the victims of Daenerys’ royal wrath:

These are far from the only people Daenerys gleefully tortured to death throughout the show, so her actions in the most recent episode should have come as no surprise.

Politically, Daenerys’ storyline is a parable about the folly of humanitarian intervention. Up until this point, she had justified her actions, at least in part, as a righteous effort to free the people of King’s Landing from Queen Cersei’s tyrannical rule. But Daenerys began her quest long before Cersei ascended to the throne. If she had crossed the Narrow Sea with her armies and her dragons and found Westeros to be justly ruled, would she have simply turned back and decided the throne was no longer her birthright? It seems unlikely.

As King of the North, Jon Snow has been the closest thing this show has had to a democratically elected leader. Snow is an almost comically forthright do-gooder, willing to sacrifice anything and everything to help his people. And still Daenerys forced him to give up his crown before she would agree to help him fight off the existential threat of the White Walkers and their zombie-like army. It was not the cruelty of other rulers that incited Daenerys to violence but her own will to power.

So why were so many “Game of Thrones” fans, dedicated to the study of the show, the books and its lore, so stunned by Daenerys’ genocidal turn? The most likely answer is that they have been conditioned to be.

In the real world, we see rulers like Barack Obama and Hillary Clinton as noble, kind and just while they rain down death and destruction on the poor of foreign countries. Is it any wonder that we can excuse a torture here or a slaughter there if a character is compelling enough?

The numerous comparisons of Daenerys to Clinton, made by fans of both, were never more accurate than when Dany obliterated scores of civilians to better subjugate them. Whether we think of King’s Landing as Afghanistan or Iraq or Libya, one thing is clear—we should learn to be just as horrified when our charismatic leaders rain down fire of their own.