'Freudian slip': Barr makes it clear during Senate testimony that he’s working for Trump — not the American people 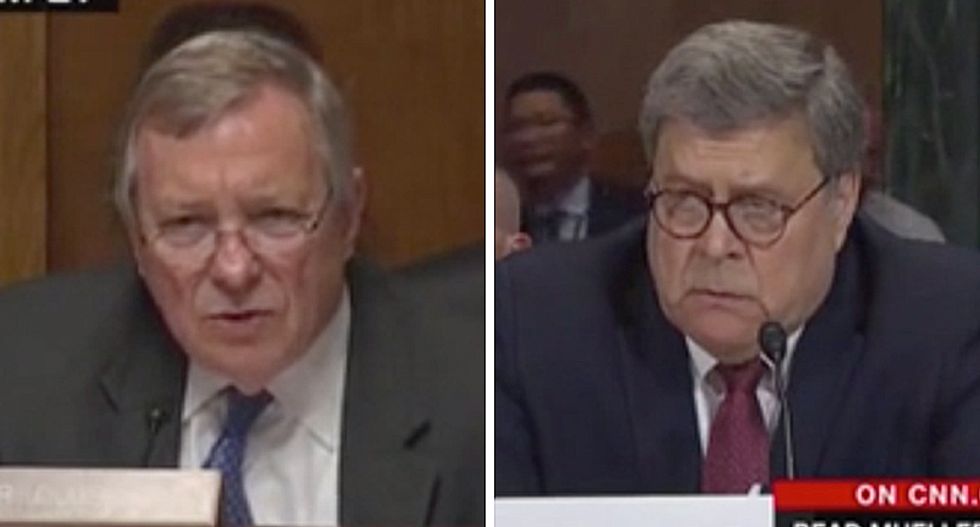 During an incredibly effective line of questioning by Sen. Dick Durban (D-L) on Wednesday, Attorney General Bill Barr made it clear he’s working for President Donald Trump — not the American people.

Durbin, who began his time with a snarky rundown of his Republican colleague’s efforts to deflect the hearing from a discussion of the Mueller report to yet another investigation of Hillary Clinton’s emails, asked Barr about Trump’s efforts to get former White House counsel Don McGahn to lie about his request to fire Mueller, originally reported in the New York Times:

The last point I want to make is about Don McGahn. If you read the section here, 113 to 120 on Don McGahn’s experience, the president wanted him to state publicly that the New York Times article was untrue, that he had not asked McGahn to fire the special counsel. McGahn refused and there’s speculation as to whether he risked being dismissed or even resigning over this issue. And for you to suggest that this was some sort of a dance with Rod Rosenstein, I think the president’s intent here was very he wanted this to end. He told Lester Holt … the reason to get rid of [James] Comey is because of the Russian investigation.

Over and over again, the president was very explicit and certainly was very expository in his style. Let me ask you this conclusion. My time is up. Do you have any objections? Can you think of an objection about why Don McGahn shouldn’t come before this committee and testify about his experience?”

Barr stated that his objection is that McGahn “is a close adviser to the president.”

Barr later said it’s “a call for the president to make” about whether McGahn should testify, as the former White House counsel "would be testifying about privileged” information.

“I would hope we could get to the bottom of this with actual testimony of witnesses after we take another close look at Hillary Clinton’s emails,” Durbin replied.