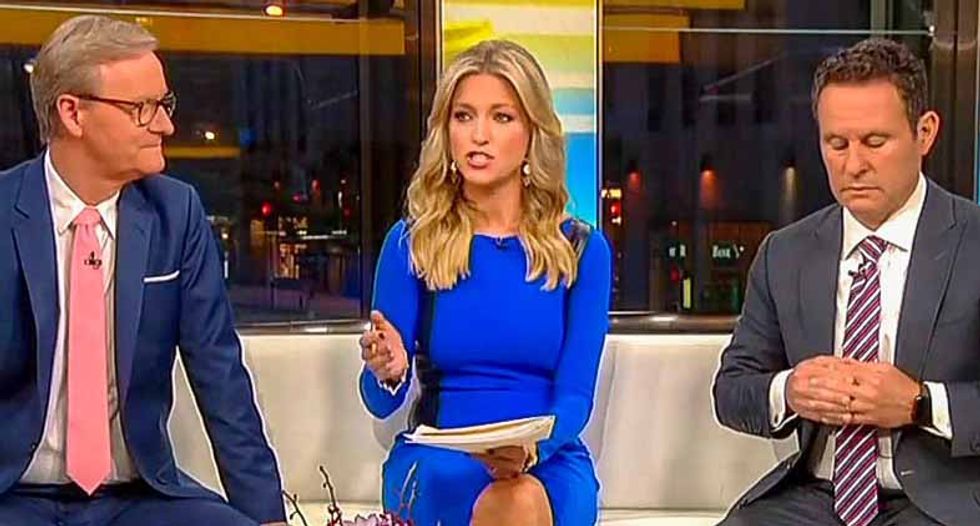 Image via Screengrab.
David Badash
and
The New Civil Rights Movement
May 07, 2019Video

"Fox & Friends" was very focused on God – specifically, the Christian God of the Bible – on Tuesday morning. In one segment the Fox News AM crew used the Bible to interpret the "top topics" of the day, while another focused on what the hosts and a guest claimed is the disappearance of God in America.

Using a week-old story about a Pennsylvania elementary school that has stopped saying, "God bless America" after the Pledge of Allegiance is read over the school's PA system, "Fox & Friends" invited an attorney from an anti-LGBT Christian law firm on to offer his opinion.

"I’m wondering if they’re so upset about the phrase 'God Bless America,' is the school district there in Pennsylvania, that is frankly not too far away from where those flights went down on 9/11, are they going to get rid of the dollar bills that have in God we trust on them?" Jeremy Dys, the Deputy General Counsel for the anti-LGBT organization First Liberty, asked.

"Are they going to start punishing teachers for saying 'God bless you' to students that sneeze in the hallway? This is absurd and it should be treated as absurd. When people say 'the grass is pink,' it’s not based on any kind of reality, just like they say 'God bless America is unconstitutional,' there is no reality that supports that.”

"Fox & Friends" co-host Ainsley Earhardt was quick to weigh in.

"As a Christian my faith is extremely important to me. When I think about taking God out of America, it really saddens me because I feel like we need Him," she said.

"When you have shootings in synagogues, shootings in churches, and you have to get wanded before you walk in to a church now. Where have we come as a country? What's going to happen if we continue to push this narrative to take God out of everything?"

Dys added, "I fear. I fear for our country, if we were to get rid of these things entirely."

He called it "a danger to our society" if America gets rid of "any kind of utterance of religion in public."

Ainsley Earhardt: "When I think about taking God out of America, it really saddens me because I feel like we need H… https://t.co/2LincD5yqO
— Bobby Lewis (@Bobby Lewis) 1557227789