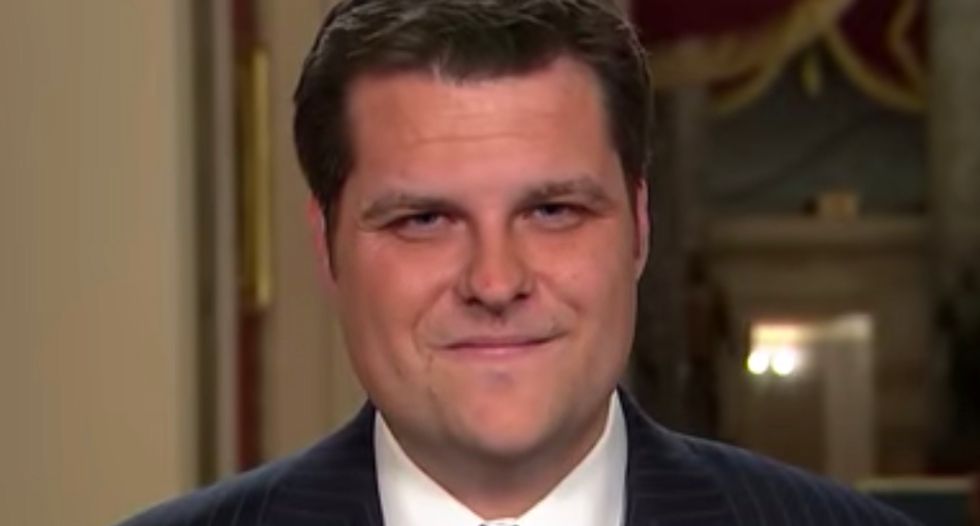 Image via Screengrab
Alex Henderson
May 07, 2019 The Right Wing

In right-wing Florida politics, one of the most bitter feuds has been the one between Sen. Rick Scott and Rep. Matt Gaetz. There is no love lost between the two Republicans, both of whom have been ardent supporters of President Donald Trump. And the political and economic crisis in Venezuela, according to a May 7 report by Sam Brodey and Asawin Suebsaeng for the Daily Beast, is reopening their old wounds.

Scott, who served as governor of Florida before defeating long-time Democratic Sen. Bill Nelson in 2018, spoke out on Venezuela on April 30 — calling for Trump to “immediately position American military assets” in response to events in that country, where President Nicolás Maduro has been clinging to power while being challenged by opposition leader Juan Guaidó. And Scott stressed that the U.S. should be ready to “defend freedom and democracy as well as U.S. national security interests in our hemisphere.”

But the 36-year-old Gaetz spoke out as well that day when he expressed his solidarity with Trump while distancing himself from Scott. “Direct U.S. military involvement risks allowing Maduro to externalize conflict, scapegoat his failures and delegitimize the organic desire of Venezuelans to choose their own brighter destiny,” Gaetz asserted. “I trust and hope that the Trump Administration will continue to skillfully advance the cause of freedom in Latin America and throughout the world.”

The Daily Beast quotes a Scott spokesperson as saying that Gaetz is “entitled to his own opinion” but noting that the former Florida governor is a member of the Senate Armed Services Committee — and that he won a statewide race, implying that Gaetz only won in his congressional district.

Former Florida Rep. Carlos Carbelo, interviewed by the Daily Beast, said that he didn’t know whether or not Gaetz’ long-running feud with Scott was a factor in their different views on Venezuela — although he didn’t rule out the possibility.

“It’s possible it was timed,” Curbelo, a Republican, told the Daily Beast. “I’ll also tell you: I know Matt very well, and he shares his opinion on all issues all the time. He’s not exactly a laconic member of Congress.”

The animosity between Scott and Gaetz asserted itself earlier this year when, according to Politico, Gaetz urged the Trump Administration to deny a Scott ally a position in the Federal Emergency Management Agency (FEMA). And the two of them also clashed in February over attorney Michael Cohen’s February 27 testimony before the House Oversight Committee.

On Tuesday, February 26, the night before Cohen (Trump’s former personal attorney) testified, Gaetz tweeted to Cohen’s Twitter account, “Do your wife & father-in-law know about your girlfriends? Maybe tonight would be a good time for that chat.” Gaetz’ tweet sparked outrage and allegations that he was trying to bully a witness, and Scott declared to Gaetz, “If you’re trying to intimidate a witness, that’s wrong.” And the Florida Bar has investigated Gaetz, an attorney, for alleged witness intimidation as a result of his tweet (which he deleted).