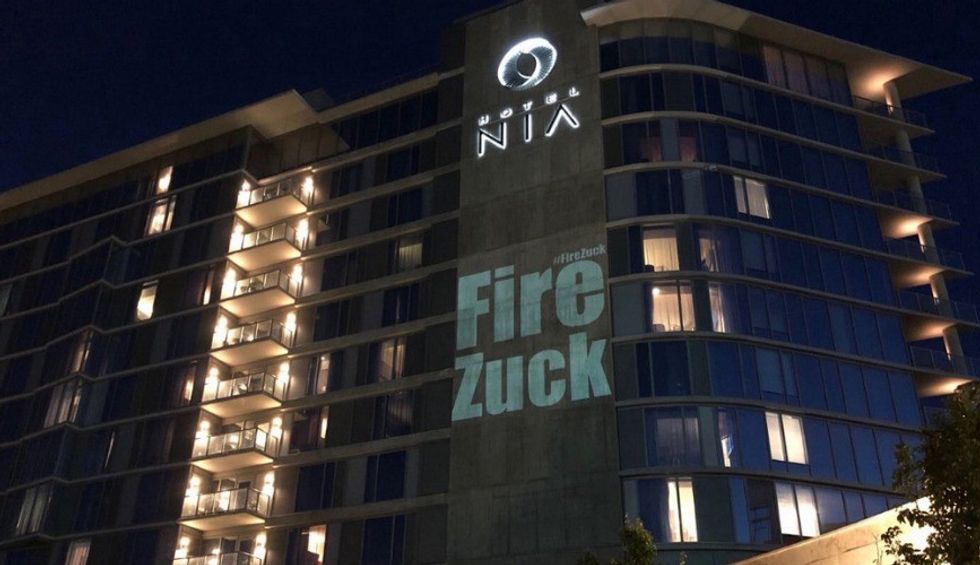 Image via Fight for the Future.
Julia Conley
and
Common Dreams
May 30, 2019 News & Politics

Accusing the social media giant Facebook of actively working in opposition to "democracy and human rights," the internet freedom and civil rights group Fight for the Future greeted the company's shareholders arriving for their annual meeting in Palo Alto, Calif. Wednesday night with a demand that they fire CEO Mark Zuckerberg.

The group projected the message "Fire Zuck" onto the side of the Hotel Nia.

"Facebook has violated billions of people's basic rights, harvested and abused our data in nauseating ways, and shown reckless disregard for the human impact of its products," said Fight for the Future in a statement. "Facebook's current business practices are fundamentally at odds with democracy and human rights."

The projection on Wednesday night followed an open letter from the group demanding the removal of Zuckerberg, citing the company's repeated privacy breaches, which gathered thousands of signatures.

The group noted on Twitter that the action also followed a recent call from Alex Stamos, Facebook's former chief security officer, for Zuckerberg to step down.

"There is a legitimate argument that he has too much power," Stamos said on the podcast Recode Decode. "He needs to give up some of that power. If I was him, I would go hire a new CEO for the company...He should hire a CEO that can help signal both internally and externally that the culture has to change."

At The Guardian, Fight for the Future deputy director Evan Greer wrote an op-ed earlier this month outlining 25 reasons critics are calling for Zuckerberg's ouster, including revelations that hundreds of millions of users' passwords were stored in searchable plain text for years; Facebook's decision to hire an architect of the Patriot Act as its general counsel; its use of climate science deniers as fact-checkers; and its discrimination against Palestinian accounts at the direction of the U.S. and Israeli governments.

"Enough is enough," wrote Greer. "Mark Zuckerberg must go. For the longest time we’ve accepted as scripture that Silicon Valley founders had a divine right to lead the most powerful companies ever created. We need to burst this cultish idea."

While the meeting is meant to give investors a change to share their concerns about the direction of the company, Zuckerberg's outsize control over Facebook makes the gathering a "sham," said Fight for the Future.

Some shareholders have recently expressed concerns about the growing scrutiny around the company, but because Zuckerberg controls 58 percent of the voting power at Facebook, expected votes at the meeting on proposals to reduce the CEO's power will be largely ceremonial, Fight for the Future wrote.

"There is only one decision maker who has control over everything Facebook does, and that's Mark Zuckerberg. As the CEO and board chair, Zuckerberg on his own decides everything done at the company," wrote the organization. "No matter what other shareholders or board members think, it's his decision that stays."

"Zuckerberg has been the sole leader of Facebook for its entire 15 years of existence," the group added, saying that in that time there have been no serious attempts by the company to reform its privacy and business practices even as it has faced major legal action.

Last year, Facebook was one of three tech companies hit with $8.8 billion in fines after strict new privacy rules went into effect in Europe. In the U.S., the Federal Trade Commission (FTC) is expected to hand a $5 billion fine to the company for its privacy breaches.