Far-right GotNews was driven out of business after smearing an innocent person — so why are Breitbart and Project Veritas still alive? 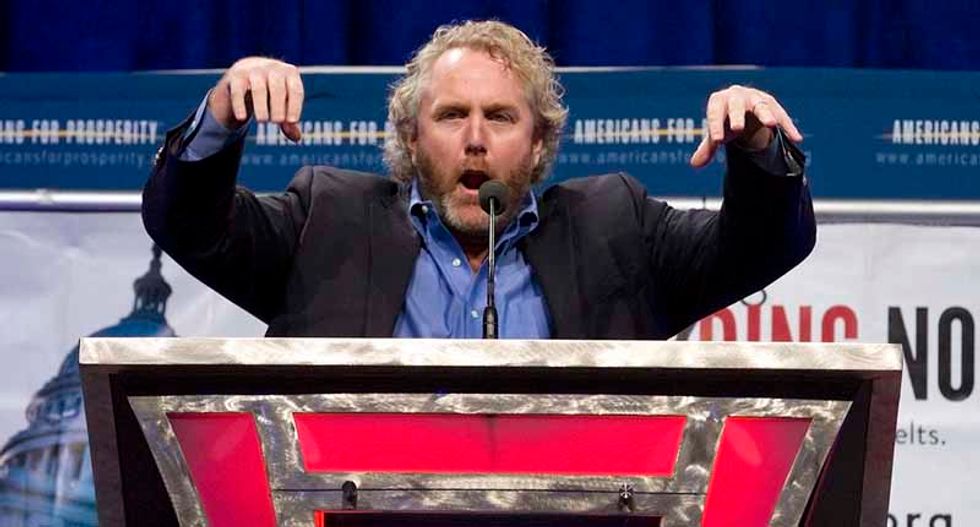 "Andrew Breitbart at the Americans for Prosperity Defending the American Dream Conference." by markn3tel is licensed under CC BY 2.0
Daily Kos
May 09, 2019 Media

In case you missed it, GotNews is filing for Chapter 7 bankruptcy. All indications are that it was driven out of business after its longtime impresario, pseudo-journalist and far-right provocateur Charles C. “Chuck” Johnson, smeared an innocent teenager as the driver of the car that killed Heather Heyer in Charlottesville. The site went offline soon afterward.

The more I thought about it, the angrier I got. After all, two equally noxious far-right agitprop shops are still in business despite being guilty of something that, in my view, is just as egregious as what Chuckie did to that teenager. In case you missed it, back in 2017, Breitbart and Project Veritas led the hatefest against the women who claimed Roy Moore molested or improperly pursued them—despite having reason to believe they were telling the truth.

In case you missed it, just before Christmas 2017, Breitbart editor-in-chief Alex Marlow—the operating head of Breitbart’s newsroom—told CNN’s Oliver Darcy that he believed Leigh Corfman, the woman whose accusations proved to be the beginning of the end of Moore’s Senate hopes, sounded credible. And yet, he said—with a straight face—that he wondered if WaPo’s bombshell story about her claims was a hatchet job against Moore. Breitbart, remember, had been relentless in attacking Corfman and the other women and denouncing the Post’s story as a politically motivated hit piece.

As I wrote at the time at Liberal America, Marlow’s statement had the effect of putting a big, fat asterisk in the headline of every story Breitbart churned out about that race. The manner in which Breitbart smeared those women was outrageous enough, as it proved why accusers don’t come forward. But to do so while having reason to believe at least one of them was telling the truth? Any newsroom boss who even thinks that’s okay has no soul.

Soon afterward, Project Veritas ringleader James O’Keefe also admitted that he believed Moore’s accusers were credible. But he crassly declared that he was more focused on media bias that their credibility.

As we know, that “investigation” entailed having one of his minions to plant bogus accusations about Moore in WaPo in hopes of proving that WaPo really was a librul fake news outlet. That was bad enough. But to admit doing so despite believing the women were credible is absolutely heinous.

It is simply unbelievable that Breitbart and Project Veritas came out of this unscathed, even allowing for Marlow and O’Keefe’s admissions coming in the heat of the debate over Trump’s tax reform scam. After all, they admitted to behavior that is the very definition of reckless disregard for the truth. Imagine if one of the many outlets that passed on a chance to blow the lid on Harvey Weinstein not only had reason to believe that his accusers were telling the truth, but ran stories that essentially called his accusers liars. That’s how depraved this was.

And it’s even more outrageous now that GotNews is facing a long-overdue reckoning for an act of reckless disregard that is every bit as outrageous—and yet, Breitbart and Project Veritas are both still alive. Johnson was forced to hang it up because he doesn’t have someone wiling to open his or her checkbook to allow him to keep engaging in doxing masquerading as journalism. By comparison, Rebekah Mercer apparently has few qualms about helping Breitbart burn the system down, while Donors Trust is still willing to help O’Keefe target journalists by whatever means necessary. And these two outfits are breaking the MSM’s balls over Mueller?

There is something wrong when a right-wing agitprop shop can breach every standard of decency and ethics that is known and still stay in business. Simply put, if Breitbart and Project Veritas are allowed to exist after what they did to Moore’s accusers, we owe an apology to Chuck Johnson.