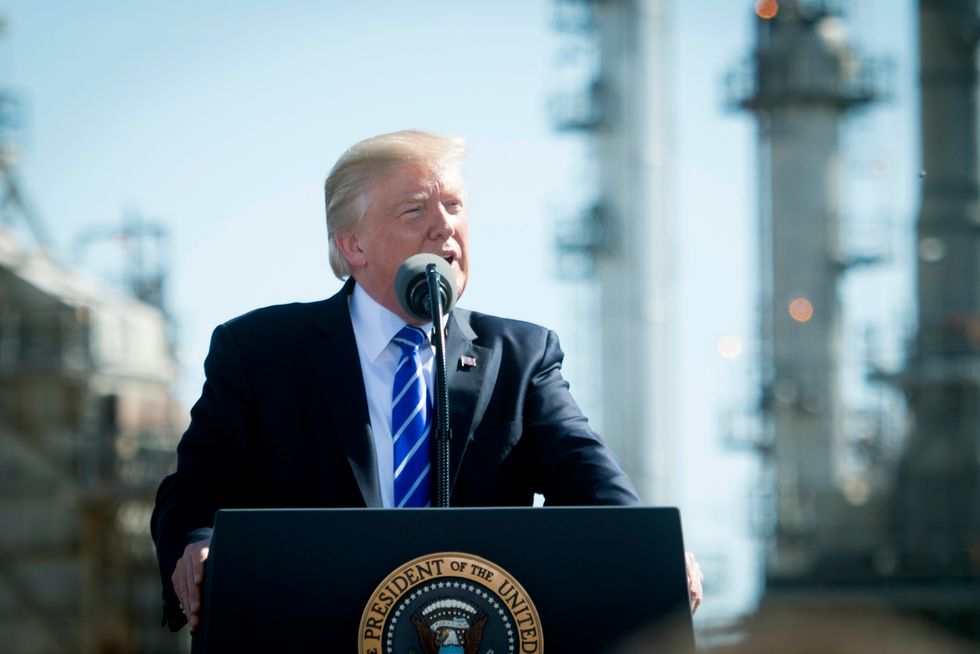 President Donald Trump is planning on making it easier for air polluters to conceal the lives lost due to their actions — and a top climatologist and geophysicist is calling for him to be held accountable.

The Trump administration has instructed the Environmental Protection Agency (EPA) to use a new method for projecting the future health risks of air pollution, which would significantly reduce last year's estimate that up to 1,400 additional premature deaths will occur every year due to a proposed new rule on coal plant emissions, according to The New York Times. The plan is controversial, in part, because experts claim it has not been peer-reviewed and is not scientifically sound, breaking precedent in terms of how the EPA attempts to handle environmental regulations.

Its immediate effect, however, would be to make it easier for the Trump administration to implement its Affordable Clean Energy rule. In spite of its name, exists to reduce the environmental safeguards established by President Barack Obama's original Clean Power Plan, which it replaced.

"This is a logical next step in the effort by Trump and the polluting interests that dictate his environmental policies to dismantle the environmental protections of the past half century put in place by past both Republican and Democratic presidents," Michael E. Mann, a distinguished professor of atmospheric science at Penn State University, told Salon by email.

"Let me be blunt: Trump is choosing to kill people in order to increase the profits of the polluting interests to which he is beholden," Mann added. "I cannot think of a more craven act than this, and we’re talking about a president who is known for craven acts. There is a reason I warned back in October 2016 that Trump is a threat to the planet."

When asked if he believes the scientific community has a responsibility to break out of its usual apolitical stance in order to speak out against Trump's positions, Mann argued emphatically that this is indeed the case.

"I’ve been advocating that for years, but better late than never," Mann explained. "The short answer is: Yes, our planet is under attack by polluting interests and the politicians doing their bidding. The stakes couldn’t be greater. We scientists cannot stand on the sidelines. We must be on the frontlines, doing everything we can to inform the public discourse concerning policy-relevant science."

"Elections to have consequences. If a tiny fraction of voters who sat out the last presidential election under the misguided notion that there was no difference between the two candidates had voted, we wouldn’t be in the predicament we are now in," he continued. "That having been said, there are many ways we can influence policy. We must use our voice. Speak out, encourage others to do so and provide support for our children, who are now literally marching in the streets because they recognize what the stakes are. We must find our voice and use it, we must demand that policymakers represent our interests rather than the polluting interests and we must vote out those who won’t."

Kevin Trenberth, a distinguished senior scientist in the climate analysis section of the National Center for Atmospheric Research, echoed these thoughts, telling Salon by email that "there are a number of responsible businesses that clean-up after their activities, but it is often easy for others to undercut them by dumping their waste and pollution into the environment at a cost to all. A key role of government is to ensure that this does not happen, with rules and regulations to protect the innocent, including many animals and ecosystems. The current U.S. administration has abdicated its responsibility. Instead we all ultimately pay a much higher price in many ways. Let's Make America Clean Again!"

Ken Caldeira of the Carnegie Department of Global Ecology was more blunt, telling Salon by email that "it is one thing for the Trump administration to decide that more people should be killed from particulate air pollution, because their lives are worth less than the money to be made from loosened regulations. It is another thing entirely to enter an Orwellian world, in which we pretend that the loosening of regulations will not result in more people dying. Trump complains about fake news, but then to justify his policies, his minions create fake science and then use it to create real policy."