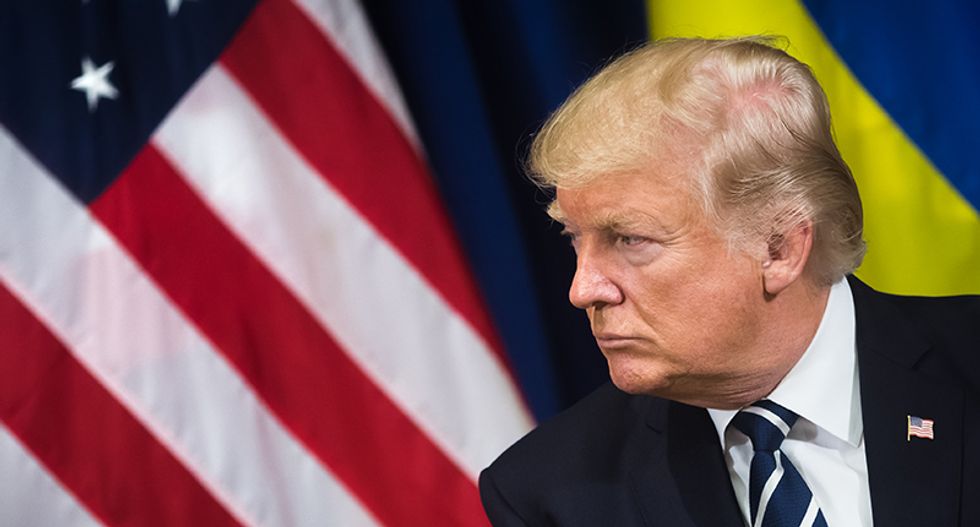 Image via Shutterstock.
Chauncey DeVega
and
Salon
May 16, 2019 Trump

He fulfills this role in several ways.

Trump threatens the sense of safety and security — the general welfare — of White America by making constant, ominous threats about the murderous, rapist and otherwise dangerous nonwhite immigrants who are invading our sacred nation. Trump then promises to "keep America safe" from these "invaders" by building a "fabulous wall" along the U.S.-Mexico border.

Trump stokes the egos and collective narcissism of his resentful and bigoted supporters. He satisfies their short-term emotional welfare by fueling and arousing the psychological wages of whiteness.

Trump makes great promises about restoring, securing and protecting the economic welfare of those "forgotten" Americans in Rust Belt and red state America by forcing the coal industry and manufacturers to remain in those areas. Trump also makes promises about health care, the environment, education and other public policies. His promises, are of course, lies.

It is a rare thing when Donald Trump the White Welfare King actually provides anything of material benefit or substance for his supporters.

Trump stokes the egos and collective narcissism of his resentful and bigoted supporters. He satisfies their short-term emotional welfare by fueling and arousing the psychological wages of whiteness.

Trump makes great promises about restoring, securing and protecting the economic welfare of those "forgotten" Americans in Rust Belt and red state America by forcing the coal industry and manufacturers to remain in those areas. Trump also makes promises about health care, the environment, education and other public policies. His promises, are of course, lies.

It is a rare thing when Donald Trump the White Welfare King actually provides anything of material benefit or substance for his supporters.

The Homestead Acts were unquestionably the most extensive, radical, redistributive governmental policy in US history. The number of adult descendants of the original Homestead Act recipients living in the year 2000 was estimated to be around 46 million people, about a quarter of the US adult population. If that many white Americans can trace their legacy of wealth and property ownership to a single entitlement programme, then the perpetuation of black poverty must also be linked to national policy. Indeed, the Homestead Acts excluded African Americans not in letter, but in practice — a template that the government would propagate for the next century and a half.

With the advent of emancipation, therefore, blacks became the only race in the US ever to start out, as an entire people, with close to zero capital. Having nothing else upon which to build or generate wealth, the majority of freedmen had little real chance of breaking the cycles of poverty created by slavery, and perpetuated by federal policy. The stain of slavery, it seems, is much more widespread and lasting than many Americans have admitted. Yet it is the legacy of the Reconstruction — particularly the failure of land redistribution — that so closely coupled poverty and race in the US.

Beginning in the 1930s and the 1940s, the New Deal era's VA and FHA loan programs provided money and other economic supports for white Americans. Nonwhites were largely excluded from these opportunities.

Collectively these programs helped to create the American middle class, which at its inception was almost entirely white. They did so by unequally and unfairly transferring income and wealth away from nonwhites.

In total, the VA and FHA home loan programs and the G.I. Bill were the largest wealth and income-creating, as well as wealth transfer programs in the 20th century and perhaps all of American history — if one "neatly" and incorrectly excludes slavery and land theft From Native Americans.

What social scientists have described as the "submerged state" — tax credits, tax breaks and other government incentives that many Americans receive but do not generally acknowledge —disproportionately transfers wealth and income to white people in America as compared to other groups. Opportunity hoarding by the top 20 percent of Americans, a group that is disproportionately white, also contributes to extreme social inequality.

Here's another factor that ought not to be overlooked: The Republicans' recent "tax reforms" were a gift of at least $1.5 trillion from the American people to the very rich, a group that is disproportionately white and male, and significantly older than the general public.

Even Trump's payouts to farmers will disproportionately benefit white people. Why? African-American, Hispanic and other nonwhite farmers have been systematic targets of racial discrimination, by the U.S. government as well as many white communities across the country.

Who is excluded from the largess of King Trump's White Welfare money machine?

The people of Puerto Rico. Trump believes they do not need any additional disaster assistance because they are, in his eyes, lazy and need to help themselves.

The people of California. They are somehow responsible for the infernos that caused at least $9 billion in damage and killed 85 people.

Nonwhite people in America's inner cities and other parts of the country. Conservatives — and too many others, including some Democrats — believe they have "bad culture" and need to learn "personal responsibility." Federal money for improved schools, housing, and other needs would, in Trump and the right-wing movement's deranged view of "the inner city" (aka black people), be wasted.

Children, the elderly, the sick and infirm, the homeless, the disabled and other groups who, in the right-wing movement's neoliberal, Malthusian and social Darwinist worldview are "surplus people." Ayn Rand's and Milton Friedman's and the Koch brothers' dreams have become the American people's nightmares.

Who is included in King Trump's White Welfare gift-giving?

Big business and the already rich, of course. The Pentagon is never to be denied. But most important, "Trump's people" — those whom his advisers and supporters deem to be the "real Americans." They are white, right-wing conservatives. Many are also Christian nationalists, Dominionists, and right-wing fundamentalists of other varieties.

In American politics the following truisms still apply: "All politics is local"; "A chicken in every pot"; "What have you done for me lately?"; and "Bring home the bacon."

Historian Ibram X. Kendi recently described Trump's farm policies in a Twitter post this way: "Welfare for conservatives against welfare. But even more insidiously, this is buying votes. The Trump administration buys White conservative votes and suppresses the votes of his enemies — and neither is an international corruption scandal. What a time to be alive."

This is King Trump's great "innovation": He has melded his unapologetic white identity politics with authoritarianism, naked corruption and poorly designed welfare policies for white people.