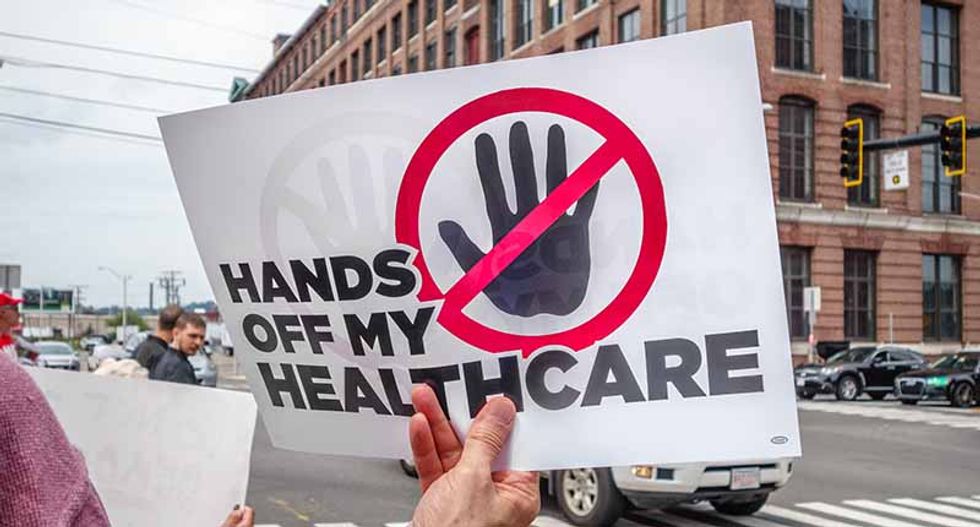 Image via Shutterstock.
David Badash
and
The New Civil Rights Movement
May 02, 2019 The Right Wing

The Trump administration is moving forward with its plan to completely invalidate and eliminate the Affordable Care Act, including the ObamaCare health insurance exchanges, Medicaid expansion, and protections for people with pre-existing conditions.

The Dept. of Justice is not only refusing to defend the Affordable Care Act in court in a lawsuit brought by the attorneys general of Texas and about a dozen red states, but it has taken that lawsuit and is now using it as a tool to get rid of ObamaCare.

The administration could have refused to defend the law, claiming it believes it is unconstitutional – which would be difficult, since the Supreme Court has ruled the law is constitutional.

But it is going further in asking the court to invalidate the entire law, not just the portion of the law the lawsuit is challenging.

In official court papers filed Wednesday in the conservative 5th Circuit Court of Appeals, the administration says the Affordable Care Act "should not be allowed to remain in effect." It argues that the individual mandate is unconstitutional, a claim a lower court supported late last year.

The DOJ is arguing that because the individual mandate has been ruled unconstitutional the entire law must be stricken down, even aspects that have nothing to do with that part of the law.

Assistant Attorney General Joseph Hunt "suggested that rewriting the statute by 'picking and choosing which provisions to invalidate' would interfere with the role of Congress and the 'proper course' for the courts would be to strike down the law in its entirety," CNN reports.

Senate Democratic Leader Chuck Schumer, noting the health care law "protects the 133 million Americans with pre-existing conditions," and "has provided tens of millions more Americans with health insurance coverage, and has lowered prescription drug costs for millions of seniors," blasted President Donald Trump for wanting "to take all of that away from the American people, jacking up health care costs and leaving millions without coverage."