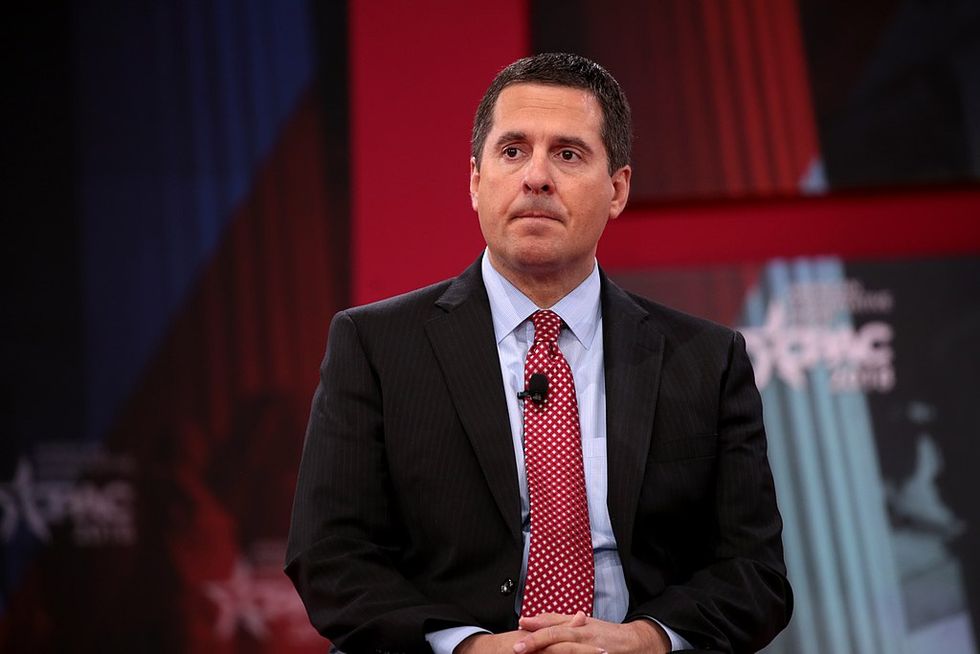 Appearing on Sean Hannity’s program on Fox News on Tuesday night, Rep. Devin Nunes floated a conspiracy theory about the “insurance policy” mentioned in a 2016 text between former FBI employees Peter Strzok and Lisa Page. Nunes told Hannity, “We believe that ‘insurance policy’ is not just about investigating the Trump campaign. We believe it’s to ensure that they were able to get the FISA warrant on Carter Page so they could go in and look at the e-mails in the campaign.”

In 2016, Page resigned from Donald Trump’s presidential campaign after news reports focused on his links to Russian interests. Page was investigated by the U.S. Department of Justice (DOJ) that year, and Trump has claimed that the FBI under President Barack Obama had it in for him and spied on his campaign. Nunes, an ardent Trump supporter, shares that view.

But the California congressman’s latest anti-FBI assertion is only one of the outlandish things he has said or done. Here are some of the most over-the-top things Nunes has said or done during his years in Congress.

The Affordable Care Act of 2010, a.k.a. Obamacare, was heavily influenced by the “universal health care via the private sector” ideas that had been promoted by President Richard Nixon, the Heritage Foundation, former Massachusetts Gov. Mitt Romney and others on the right. But Nunes, during the 2010 health care debate, complained to House Speaker Nancy Pelosi, “for most of the 20th Century, people fled the ghost of communist dictators — and now, you are bringing the ghosts back into this chamber.”

Obama met with none other than Stuart Altman, Nixon’s former consultant on health care reform, during the Obamacare debate of 2009/2010, yet Nunes equated Pelosi’s efforts to move the health care debate along with “communist dictators.”

Nunes’ conspiracy theories aren’t always aimed at Democrats; sometimes, he goes after fellow Republicans—and in May 2014, Nunes described Michigan Rep. Justin Amash as “al-Qaeda’s best friend in Congress.” Although Amash is a Republican, Nunes disliked his voting record on National Security Agency (NSA) surveillance. And he challenged Amash’s position by painting him as a friend of extreme Islamists.

3. Nunes filed a lawsuit against a fake cow

On March 18, Nunes filed a frivolous lawsuit against Twitter in response to various fake Twitter accounts that mocked him, including @DevinCow. Although the goofy @DevinCow—which found him being mocked by a fictional cow—was obviously satire, Nunes sought $250 million in damages.

4. Nunes said Michael Flynn should be thanked for communications with Russian Ambassador Kislyak

Michael Flynn resigned from his position as foreign policy adviser in the Trump Administration after his inappropriate communications with Russian officials were revealed. Flynn later admitted to criminal conduct when he pled guilty to lying to the FBI about his communications with Russian Ambassador Sergey Kislyak during the Obama-to-Trump lame duck transition period. But to hear Nunes tell it, Flynn did nothing wrong. In March 2017, Nunes said of Flynn, “From everything that I can see, his conversations with the Russian ambassador—he was doing this country a favor, and he should be thanked for it

5. Nunes claimed Democrats wanted unredacted Mueller report so they could ‘leak it’

In April, Nunes claimed that House Democrats had a sinister motive for requesting an unredacted copy of Mueller’s report: they wanted to “leak it.” The congressman told Fox News’ Harris Faulkner, “The Democrats on the left here just want to get their hands on the report…. so they can leak it to all the bodies in the media, so they can continue on going down rabbit holes of pretending that there is some kind of Russian collusion.