Democrats demand probe into Barr amid news of Mueller criticism: 'We cannot stand for this deception' 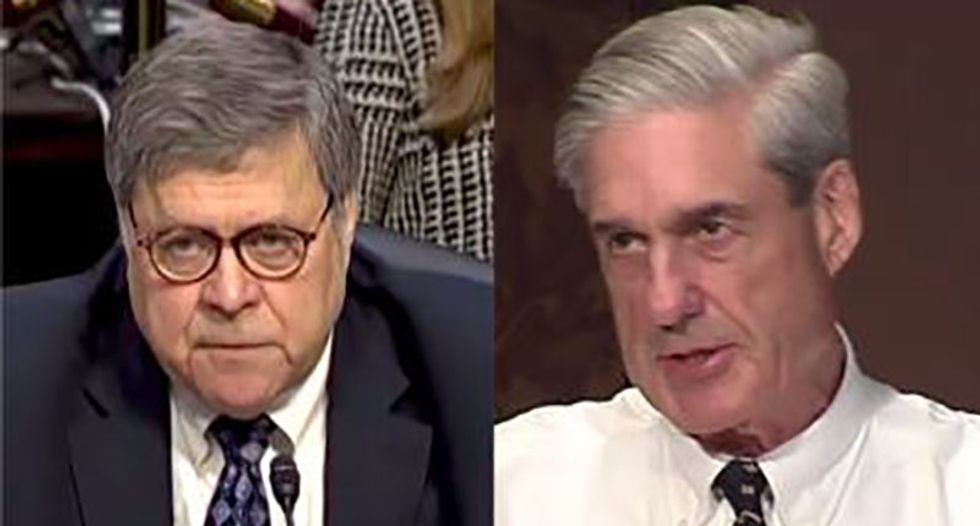 Amid news that Special Counsel Robert Mueller objected to how Attorney General William Barr presented the findings of the Russia probe, Democrats on Tuesday demanded an immediate investigation into Barr's "possible effort to mislead the public."

As the Washington Post reported, Mueller sent a letter to Barr in March expressing concern that the Attorney General's widely criticized four-page memo about the investigation into President Donald Trump "did not fully capture the context, nature, and substance" of the findings.

"There is now public confusion about critical aspects of the results of our investigation," Mueller wrote. "This threatens to undermine a central purpose for which the Department appointed the Special Counsel: to assure full public confidence in the outcome of the investigations."

News of Mueller's letter came just hours ahead of Barr's scheduled testimony before the Senate Judiciary Committee on Wednesday.

Sen. Mazie Hirono (D-Hawaii)—who led a dozen Senate Democrats in calling for an investigation into Barr's conduct just before details of Mueller's letter emerged Tuesday—said the Special Counsel's concerns strongly confirmed the need for a probe.

"Barr's spin on the Mueller report shows he's acting like the president's lawyer, not the American people's lawyer," Hirono, a member of the Senate Judiciary Committee, tweeted Wednesday. "That's why I called on the DOJ Inspector General and Office of Professional Responsibility to look into how he misled the public to protect Donald Trump."

In a statement late Tuesday, Rep. Jerry Nadler (D-N.Y.)—chair of the House Judiciary Committee—demanded a copy of Mueller's letter to Barr and said the "Special Counsel's concerns reflect our own."

"The Attorney General should not have taken it upon himself to describe the Special Counsel's findings in a light more favorable to the president," said Nadler. "It was only a matter of time before the facts caught up to him."

Rep. Pramila Jayapal (D-Wash.), co-chair of the Congressional Progressive Caucus and member of the House Judiciary Committee, said the Special Counsel's letter "makes it clear" that Barr "tried to misdirect the American people."

"This was a giant cover up and we cannot stand for this deception," Jayapal tweeted. "It is clearer than ever that Barr is acting as Trump's personal lawyer, not the Attorney General for the people. Unacceptable."