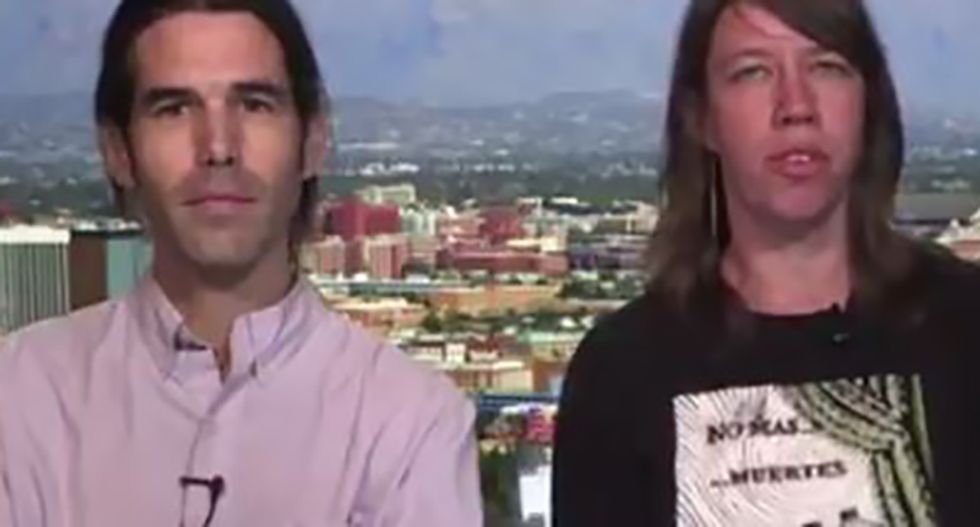 Screenshot via No More Deaths - Twitter
Jessica Corbett
and
Common Dreams
May 30, 2019

Human rights advocates accused the U.S. Justice Department of "criminalizing compassion" as a federal trial began in Arizona Wednesday for activist Scott Warren, who faces up to 20 years in prison for providing humanitarian aid to migrants in the desert.

Warren, a 36-year-old college geography instructor from Ajo, Arizona, is a volunteer for the humanitarian organization No More Deaths/No Más Muertes, an official ministry of the Unitarian Universalist Church of Tucson. He was arrested by Border Patrol agents in 2017 and faces three felony counts for providing food, water, clean clothes, and beds to two migrants.

Warren's parents, Pam and Mark, launched a MoveOn.org petition earlier this month calling on federal authorities to drop all charges, which has garnered nearly 130,000 signatures. Amnesty International issued that same demand on May 15, in an open letter to Michael Bailey, the U.S. attorney for the District of Arizona.

The charges against Warren "are an unjust criminalization of direct humanitarian assistance" and "appear to constitute a politically motivated violation of his protected rights as a Human Rights Defender," Amnesty International's Americas regional director Erika Guevara-Rosas wrote to Bailey.

"Providing humanitarian aid is never a crime," Guevara-Rosas added in a statement last week. "If Dr. Warren were convicted and imprisoned on these absurd charges, he would be a prisoner of conscience, detained for his volunteer activities motivated by humanitarian principles and his religious beliefs."

A HUMANITARIAN AID VOLUNTEER faces trial for allowing migrants access to food, water and a place to sleep after cro… https://t.co/Uogvc9AY3J
— RAICES (@RAICES)1559136091.0

On the eve of the trial, Warren detailed his lifesaving work with No More Deaths in an op-ed for The Washington Post.

In the Sonoran Desert, the temperature can reach 120 degrees during the day and plummet at night. Water is scarce. Tighter border policies have forced migrants into harsher and more remote territory, and many who attempt to traverse this landscape don't survive. Along what's become known as the Ajo corridor, dozens of bodies are found each year; many more are assumed to be undiscovered.

Local residents and volunteers organize hikes into this desert to offer humanitarian aid. We haul jugs of water and buckets filled with canned food, socks, electrolytes, and basic first-aid supplies to a few sites along the mountain and canyon paths. Other times, we get a report that someone has gone missing, and our mission becomes search and rescue—or, more often, to recover the bodies and bones of those who have died.

According to Warren, the volunteers previously coexisted with Border Patrol agents, but those days are long gone.

In recent years, "government authorities have cracked down on humanitarian aid: denying permits to enter the Cabeza Prieta National Wildlife Refuge, and kicking over and slashing water jugs," he wrote. "They are also aggressively prosecuting volunteers."

Warren warned that "my case in particular may set a dangerous precedent, as the government expands its definitions of 'transportation' and 'harboring'" under federal law. In addition to humanitarian workers, there are worries such treatment could be applied to families with mixed citizenship status who provide for undocumented relatives.

"Though this possibility would have seemed far-fetched a few years ago, it has become frighteningly real," wrote Warren. "The Trump administration's policies—warehousing asylees, separating families, caging children—seek to impose hardship and cruelty. For this strategy to work, it must also stamp out kindness."

Dr. Scott Warren and Catherine Gaffney speak about the crisis of death and disappearance and the start of Warren's… https://t.co/r6ituhXc9q
— No More Deaths (@No More Deaths)1559138336.0

Amnesty's Guevara-Rosas, in her statement last week, noted that "the U.S. government is legally required to prevent the arbitrary deaths of migrants and asylum-seekers in border areas. Yet instead, authorities have willfully destroyed humanitarian aid provisions in deadly desert terrain and are criminally prosecuting humanitarian volunteers in order to deter them from saving lives."

In response to Warren's trial, she said that "the U.S. government should immediately adopt and implement exemptions from criminal prosecution under 'smuggling' and 'harboring' charges, for the provision of humanitarian aid."