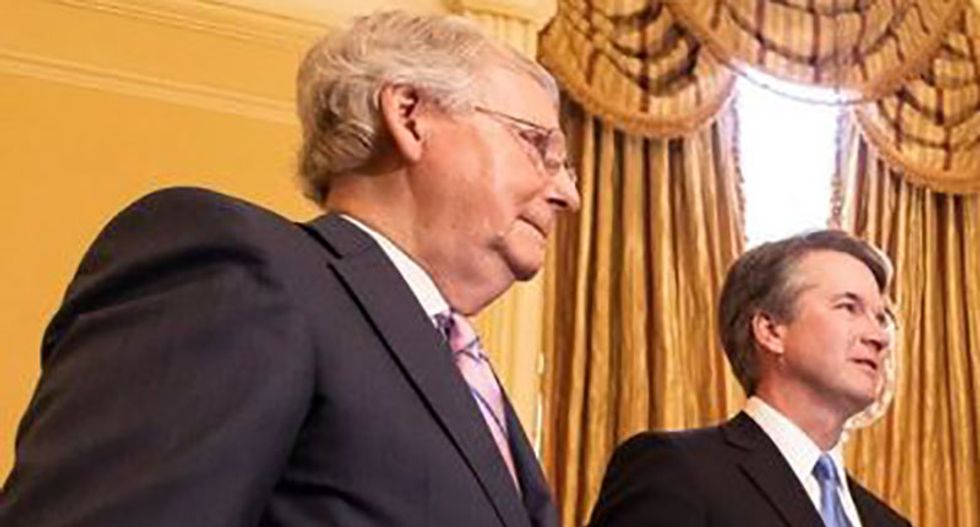 The king has everything; the peasants have nothing. He eats 15 course meals while the peasants starve. Rebels yell and the king laughs, ignoring or suppressing them effortlessly.

Mitch McConnell announces that he’d seat a replacement Supreme Court justice in 2020 after refusing to even consider Merrick Garland in 2015.

If you’re only outraged by such injustice you’re missing the point and enabling the effect.

Blatant hypocrisy isn’t just a moral outrage, it’s a status symbol — no less so than driving a fleet of Ferraris, having a trophy wife and many mistresses, or owning multiple mansions.

There’s conspicuous consumption; there’s also conspicuous presumption. Donald Trump thrives on both. The nation is divided between those of us who are outraged by the hypocrisy and those who are impressed by it.

Trump bedding Stormy Daniels with a pregnant Melania at home doesn’t dismay right-wing evangelicals. It’s proof that he was chosen by God. The rules of lowly humankind do not apply to such superior beings.

If we’re meant to be equals, hypocrisy is simply unfair and outrageous. But if they’re meant to be exceptions, ostentatious hypocrisy proves that they are. Equals can jockey for power by exercising as much hypocrisy as they can get away with.

The more outraged we are at what the Trump cult does, the more it proves that we’re the peasants and they’re the royalty. Hypocrisy is their status symbol.

The problem is not that the ends justify the means. To say that the Trump cult has ends in mind is to give them too much credit. For this cult as for any cult, ends are just more means. They’ll give lip service to whatever ends sound lofty. They’ll dress up their movement in whatever mission gains them power.

No, for them it’s that their pursuit of absolute power justifies any means necessary to gain it.

If gaining power is your sole priority you’re not just willing to cheat to get it, you’ll want to cheat at every opportunity. Cheating and getting away with it proves that you’re exceptional, exempt, to be idolized as superior to all others.

Your hypocrisy becomes a badge of honor. The more enraged the peasants are by your hypocrisy, the more exceptional you will appear. That’s why Trump cultists are embrace anything so long as it infuriates liberals, the dirtier the trick the better. Every injustice to us is proof that their conspicuous presumption is working.

Our cold civil war is being fought between two factions, those seeking to maintain what made our nation seem an exception and those who will do anything to prove that they’re exceptions, the cultural descendants of those who didn’t just own slaves but exploited them as status symbols.

Coming up with excuses for bedding and beating slaves was easy and worth it. They didn’t need good excuses; the more lame the excuse, the more it proved that they didn’t need excuses because they were born superior. They reveled in their ostentatious hypocrisy like kings entitled to do anything at the expense of their fellow humans.

The Trump cult is vying for a parasite paradise in which they get to exploit others not just because it makes their lives easier, but because it proves that their lives are worth more than ours.

If we’re simply outraged at the injustice, we’re suppressible peasants. It’s high time we exposed that their conspicuous presumption is means to their sole goal, feigned absolute omnipotence. They’re willing to see America and the world destroyed so long as they’re on top as it goes down.