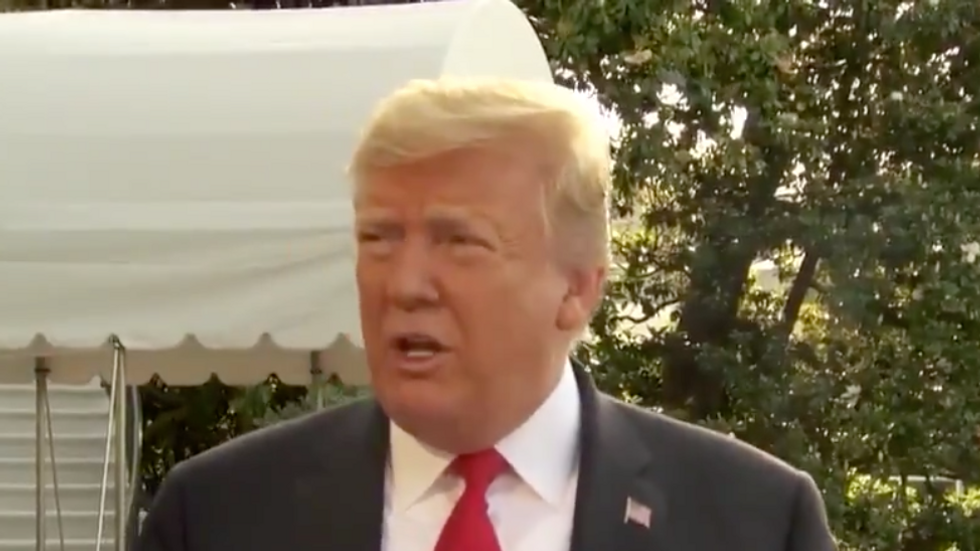 President Donald Trump was clearly rattled by Special Counsel Robert Mueller's press conference on Wednesday, and he's lashing out in the only way he knows how: telling a bunch of lies.

Speaking to reporters Thursday morning, Trump attacked Mueller and his team for a slew of contrived reasons, failing as ever to recognize the extreme caution with which the special counsel took the job of investigating the president. CNN had a panel on hand of legal experts and seasoned reporters to cut through his Trump's lies.

Host Kate Bolduan noted that one of Trump's most frequent claims about the report, that it showed "no obstruction," and that "there is nothing," is a blatant distortion.

"This is not what Bob Mueller said yesterday," she pointed out.

"This is maybe the biggest and easiest one to just shoot down," said legal analyst Elie Honig. "No obstruction? Bob Mueller spent the entirety of Volume II laying out what I think is a very compelling, almost overwhelming, case of obstruction of justice. It's certainly enough to charge."

Bolduan noted that Trump still calls the probe a "witch hunt," even though Trump's own hand-picked deputy attorney general and FBI director said it was nothing of the sort. John Avlon, a CNN justice analyst, also observed that Mueller even went out of his way to avoid accusing Trump of a crime — citing "fairness" concerns — even though he clearly had the grounds to do so if he wanted to. None of this is indicative of a witch hunt.

Evan Perez, a CNN Justice Department correspondent, went on to debunk the notion that Mueller was somehow conflicted because he had asked for the FBI director position and Trump turned him down. In fact, Perez noted, Trump's team had asked Mueller to speak about the position. The Mueller report even noted that Steve Bannon himself had dismissed Trump's claims of about this supposed conflict:

As for Mueller’s interview for FBI Director, Bannon recalled that the White House had invited Mueller to speak to the President to offer a perspective on the institution of the FBI. Bannon said that, although the White House thought about beseeching Mueller to become Director again, he did not come in looking for the job.