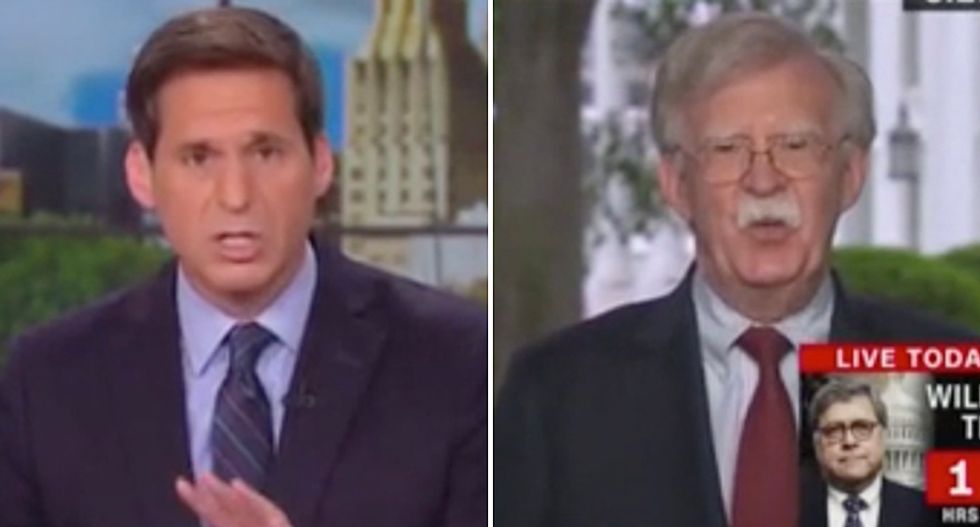 In a contentious exchange on CNN Wednesday, National Security Advisor John Bolton claimed CNN’s John Berman was “missing the point” of an interview he gave earlier on Fox News where he appeared to say there's a scheduled phone call between U.S. President Donald Trump and Russian president Vladimir Putin.

The back-and-forth began when Berman asked what Trump has “said to Vladimir Putin on this subject” of Venezuela. Tuesday, Secretary of State Mike Pompeo claimed Venezuelan leader Nicolas Maduro was prepared to flee the country until the Kremlin advised him not it. The U.S. has pledged to support an uprising against the Maduro regime.

“We've made it clear to the Russians in a lot of conversations and a lot of different levels, some of which are going to continue today, why we think this behavior is unacceptable to us,” Bolton replied.

“Has the president specifically spoken to Vladimir Putin about Venezuela?” The CNN host asked.

“I don't want to get into the specifics of the president's conversations,” Bolton said.

Referencing a “Fox & Friends” interview earlier Wednesday where Bolton was asked by host Brian Kilmeade about Trump’s plans to speak with Putin about the ongoing conflict in Venezuela, Berman asked: “I understand the president does intend to speak to Vladimir Putin today, is that correct?”

“Look, I said before I'm not going to get into the specifics to that,” Bolton claimed. “I think secretary Pompeo will be addressing his counterpart. We have had a lot of conversations with the Russians, that's for sure.”

Berman explained he’s “reading a transcript of an interview” the national security advisor just gave on Fox News, which is why he's asking the question.

“If you want to ask me about Russian collusion—“ Bolton shot back.

“I said there was a call scheduled between secretary Pompeo and his counterpart,” Bolton claimed. “You can look at your transcript.”

“Okay. I will go ahead and look at that transcript again,” Berman promised. “The part I'm looking at right now it says Ambassador John Bolton told 'Fox & Friends' that President Trump will call Vladimir Putin today. We will take another look at as you said, that's only one of the issues here.”

“This is not, you’re missing the overall point here,” Berman said. “I’m not trying to pick a fight on Russia.”

“The one who is missing the point is you,” Boltons replied.

Berman moved on with the interview,  but returned to the Fox News interview at the end of the segment.

“I don't want this to be a piece of contention here,” Berman began. “I'm reading you the transcript of the fox interview. Brian Kilmeade said to you, ‘If you want to back off the Russians you have to call the Russians as the secretary of state called his counterpart [Sergey] Lavrov. Has president called Vladimir if so, what was the call like?”

“Then you apparently said the call is scheduled for today,” Berman added.

“A call between Pompeo and his counterpart!” Bolton claimed. “The call has not been made as I understand it.”

“Great. Again, that was what the confusion was there, ambassador. I just wanted people to know because reading the transcript and looking at that exact question and answer it could leave the impression you were saying the president would speak to Vladimir Putin,” Berman explained.