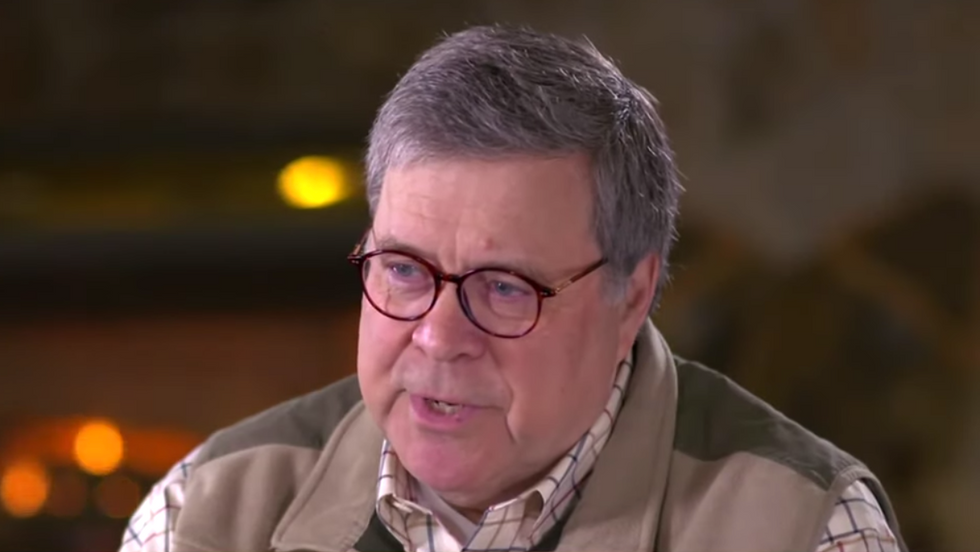 Attorney General Bill Barr is leading a crusade against the people who initiated an investigation of Russian interference in the 2016 election and its connections to President Donald Trump's campaign, but he has never explained why he has such serious suspicions. Such an explanation is needed because, despite two other investigations into the matter, he recently asked a U.S. attorney in Connecticut to review the Russia probe's origins.

And in a new interview with CBS News, Barr's comments indicated that he has a flimsy justification for launching the investigation. It's the height of irony, of course, because his and others' apparent accusations against the Russia probe investigators is that they supposedly engaged in a political hit job against then-President Barack Obama's opponents without adequate predication. Now, it seems Barr is doing exactly that for Trump.

In discussing his concerns about what he calls the "spying" against the Trump campaign, he said:

JAN CRAWFORD: Do you think enough was done in 2016?

WILLIAM BARR: Enough was done in 2016? Probably not. You know, I think Bob Mueller did some impressive work in his investigation, you know, identifying some of the Russian hackers and their influence campaign and you sort of wonder if that kind of work had been done starting in 2016, things could have been a lot different.

JAN CRAWFORD: Right because it's just hard to understand why it wasn't taken more seriously.

JAN CRAWFORD: Why do you think it was not?

WILLIAM BARR: I have no idea. That's one of the things I'm interested in looking at you know--

JAN CRAWFORD: --As part of the review?

WILLIAM BARR: Yes. In other words, you know, there are statements being made that people were warned back in April--

WILLIAM BARR: Right and I don't have any reason to doubt that, but I'm wondering what exactly was the response to it if they were alarmed. Surely the response should have been more than just, you know, dangling a confidential informant in front of a peripheral player in the Trump Campaign.

Consider what this last statement means. He suggests that the Obama administration probably didn't do enough in 2016 in response to Russia's interference and that they didn't take it seriously. But then he also says, well, if the administration really was "alarmed" about the Russian threat, "surely" (always a good indicator that someone has no evidence for the claim they're making) the investigators done more than use a confidential informant to get information on a Trump campaign staffer (which happens to be George Papadopoulos, who later lied to the FBI.)

But now Barr is talking out of both sides of his mouth. How can he both be concerned that the investigation wasn't properly predicated, and believe that the FBI's concerns were so serious that they must have used even more extensive surveillance methods than we're aware of? It's clear he's in search of a problem, not on a good-faith question driven by legitimate concerns.

He went on to say:

People have to understand, you know, one of the things here is that these efforts in 2016, these counter-intelligence activities that were directed at the Trump Campaign, were not done in the normal course and not through the normal procedures as a far as I can tell. And a lot of the people who were involved are no longer there.

It's true that a lot of the people have now left the FBI because Trump chased them out, a purge that prompted an obstruction of justice investigation that produced damning evidence (which Barr now ignores). But again, Barr's language here is telling. He says the investigation was "not done in the normal course and not through the normal procedures." Given that it was an unprecedented case, this is essentially a vacuous claim. And his "as far as I can tell" caveat is another phrase that suggests he has little basis for his claims.

There were counterintelligence activities undertaken against the Trump Campaign. And I'm not saying there was not a basis for it, that it was legitimate, but I want to see what that basis was and make sure it was legitimate.

Of course, based on the Mueller report and the conclusion of the investigation, we know there was good reason to investigate Trump associates. Rick Gates, Paul Manafort, and Michael Flynn had all been working as undisclosed agents of foreign powers. Carter Page, the report says, knew he had been targeted for recruitment as a Russian asset. And Papadopoulos has admitted that he was approached by a person offering Russian election help in the form of stolen email — emails he later.

It's conceivable, I suppose, that the FBI decided to launch a probe of Trump's campaign for political reasons and just happened to find a bunch of people it happened to target had extensive compromising foreign ties. But why, exactly, would anyone believe that?

Well I don't want to  get you know, too much into the facts because it's still under review. But I think it's important to understand what basis there was for launching counterintelligence activities against a political campaign, which is the core of our second amendment- I'm sorry, the core of our first amendment liberties in this country. And what was the predicate for it? What was the hurdle that had to be crossed? What was the process- who had to approve it? And including the electronic surveillance, whatever electronic surveillance was done. And was everyone operating in their proper lane?

In fact, he suggests that his concerns stem from not being "satisfied" and that he has a "feeling" about the need for an investigation:

Well, I'll say at this point is that it, you know, I- like many other people who are familiar with intelligence activities, I had a lot of questions about what was going on. I assumed I'd get answers when I went in and I have not gotten answers that are well satisfactory, and in fact probably have more questions, and that some of the facts that- that I've learned don't hang together with the official explanations of what happened.

... I'll just say that, you know, there's some questions that I think have to be answered, and I have a basis for feeling there has to be a review of this.

Now, to be clear, it's perfectly possible that the DOJ crossed the line at a few points during the investigation or took inappropriate steps. And DOJ itself was reviewing some of its conduct in the case before Barr got involved, which is merited. But he offers incoherent and vague explanations for inserting himself into the case, citing his feelings and nebulous "questions" that have to be answered. This gives us no reason to doubt the inference that he's looking to confirm his own prejudices, particularly as he ignores the mountain of evidence in Volume I of the Mueller report that shows why a deep investigation was warranted. And all the while, he is clearly playing the role Trump wanted for him: a partisan guardian of the president's narrow interests.