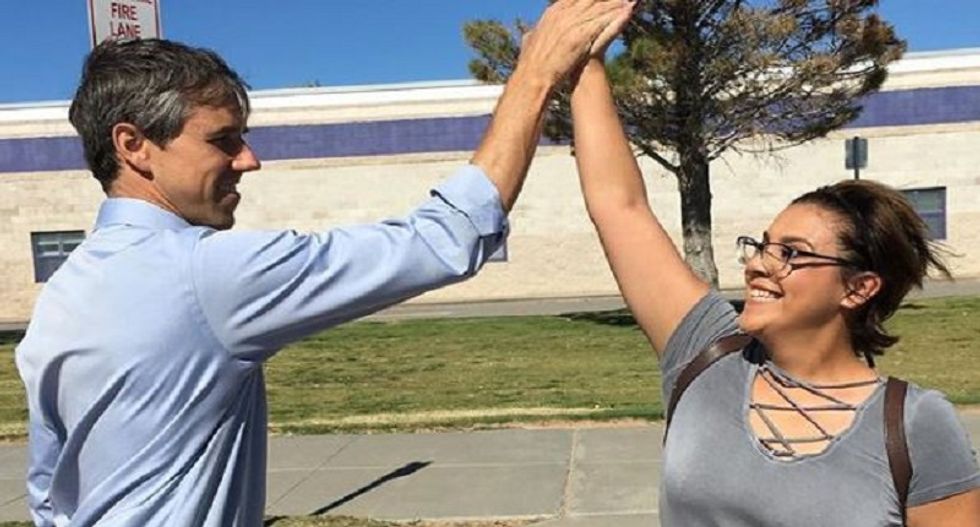 Beto O'Rourke has come back down to earth.

The 2020 Democratic presidential candidate is continuing to campaign aggressively, but after a highly anticipated launch about two months ago — and a heady opening stretch — he has settled into a more conventional position: one of over 20 contenders, grinding it out on the road while working to stand out from the massive field. His poll numbers have ticked down, the press corps following him has thinned a little and a couple of rivals have replaced him on center stage. And yes, he is back down in more ways than one, no longer hopping on tables as much as he did during those very early days.

On his third trip to Iowa as a candidate, O'Rourke said he nonetheless felt he was finding his rhythm after an overwhelming start, while acknowledging what one does when staring down the long slog of a White House run — that the race is "not gonna be won overnight."

“With 21 — maybe more candidates on the horizon — and so many good options, so many extraordinary people who are running right now — this is gonna be decided by a matter of ... a few hundred votes, a few dozen votes, maybe just a few votes, so every one of these conversations matters and that’s what I’m gonna focus my energy and time on," O'Rourke told reporters here Sunday morning when questioned about the state of his campaign.

O'Rourke may no longer hold rock-star status — crowds mobbing him before he takes the stage, cameramen pushing and shoving to get to him — but to be sure, his campaign is anything but flagging. Across five days in Iowa, O'Rourke easily filled most spaces and got warm receptions, with people often waiting around long afterward for photos.

And among those firmly in O'Rourke's corner, there is plenty of optimism about his ability to navigate this phase of the race. Bill Donehoo, who drove his family 300 miles from the Chicago area to see O'Rourke on Sunday night in Newton, Iowa, said he was "immensely confident" in O'Rourke at this point based on door-knocking he is already doing in Illinois.

Seeming to acknowledge the reality of the long, crowded race, Donehoo said it's "gonna take some time" for O'Rourke. But Donehoo insisted: "The groundswell support is there for him. I feel very confident."

In the weeks since O'Rourke's launch, the 2020 field has seen a few major developments that have dimmed the spotlight on him. Chief among them: the rise of South Bend, Indiana, Mayor Pete Buttigieg and the long-awaited entrance of former Vice President Joe Biden, who has enjoyed a bounce in the polls after already topping most beforehand.

At the same time, O'Rourke has worked to build out his campaign, which began with a skeleton crew — and a month in, lost two staffers who were key in his 2018 U.S. Senate race. He says campaign manager Jennifer O'Malley Dillon, who he named in late March, will start working full-time at his El Paso headquarters in the next week or so after working remotely from Washington, D.C. On Tuesday, he named a digital director: Rob Flaherty, who previously worked for the Democratic super PAC Priorities USA and Hillary Clinton's 2016 presidential bid. Flaherty's hiring was first reported by Politico.

In the early voting states, O'Rourke's team is still coming together. He has made initial hires in South Carolina but has not announced any in New Hampshire. Iowa, the first-in-the-nation caucus state, appears to have been a priority — he has 16 staffers there, which caught even the candidate's attention on the latest trip as he acknowledged he was still getting to know everyone.

"There's just a lot more of a coordinated effort" to build support on the ground, said O'Rourke, whose first Iowa events were no-frills affairs. "I think we're getting better organized all the time — I certainly feel that on the road."

O'Rourke is staking the latest stage of his campaign on a plan he released last week to fight climate change, his first major policy rollout. While he chose California's Central Valley as the backdrop for the policy announcement, he has been eager to connect it to the Hawkeye State as well. Within hours of landing in Iowa on Saturday, O'Rourke toured Pacific Junction, a tiny town in southwest Iowa reeling from recent flooding — "a place that is bearing the brunt of climate change," he later said.

His plan, which calls for net-zero emissions by 2050, was not universally embraced by climate activists, with at least one group, the Sunrise Movement, saying the policy does not reflect the urgency the situation demands. O'Rourke had a chance to address that line of scrutiny during a climate roundtable Monday afternoon in Des Moines, where environmental activist Channing Dutton praised O'Rourke for prioritizing the issue but asked, "Is 2050 too late?"

"2050 has to be the absolute backstop," O'Rourke said. "If we can achieve this before that, we absolutely must."

Hours later, O'Rourke had another brush with the politics of climate when he was asked at another Des Moines event to reconcile his hopes for combating global warming with the amount of donations he took from the fossil fuel industry during his Senate campaign. It was the kind of question that had dogged O'Rourke in the past, though this time, O'Rourke had some recent news to share: He signed the No Fossil Fuel Money Pledge recently after weeks of pressure, blunting what had become an early political vulnerability in his campaign.

O'Rourke's climate emphasis ran into skepticism from the other end of the political spectrum Sunday afternoon in Creston, where an audience member wearing a Trump hat asked how global warming could be an urgent threat after the severe cold that Iowa experienced this winter. O'Rourke explained how that could be connected climate change — ice sheets melting in the Arctic and forcing its frigid weather patterns south — while holding firm on his premise.

"We are warming the planet right now," O'Rourke said. "And it's going to kill us, ultimately, unless we change course."

Besides the climate plan, O'Rourke's campaign has not changed much in style and substance over two months. He's largely eschewing the cable news appearances that his rivals have racked up in favor of in-person campaigning, maintaining a hectic travel schedule that reaches beyond the traditional early voting states. After his Iowa trip, he was scheduled to visit Minnesota on Wednesday — his first trip there as a candidate — and then return to New Hampshire the next day for a three-day swing.

While he is one of the 2020 presidential race's more recent entrants, O'Rourke has already covered more ground than most of his rivals, and his campaign has been eager to promote the stats. Answering a question about youth outreach at the Newton house party, O'Rourke turned to an aide to see if he knew how many college campuses the candidate has been to already. The aide said 29 without hesitation.

In Iowa, O'Rourke has continued to send a message with his itinerary after opening his campaign there by visiting the counties along the Mississippi River that voted for Barack Obama in 2012 and then Donald Trump in 2016. On Sunday morning, O'Rourke became the first 2020 candidate to visit Shenandoah, deep in the state's southwest corner, and continued to stop in lightly treaded territory throughout the rest of the day.

Sherry Toelle, chairwoman of the Cass County Democratic Party, said O'Rourke was just the third 2020 hopeful to visit the county when he came to Atlantic on Sunday afternoon.

"He definitely needs to get out to the rural voters," Toelle said when asked what advice she would give O'Rourke. "Our county is definitely Republican, you know, and if they want to get elected, they're going to have to come out and try to pull in those independents and those Republicans into their campaign, talking to them about their issues, because otherwise they won't get anywhere, at least here."

On the stump, O'Rourke has also continued to keep a sunny disposition toward his rivals, even as the race has entered a somewhat more confrontational phase with Biden's entrance. He did make a rare outward observation about intra-party politics Monday afternoon in Indianola — lamenting that compromise has become a "four-letter word, especially in the Democratic primary right now" — but otherwise steered clear of such tension.

While Iowa voters did not seem interested in seeing O'Rourke criticize fellow Democrats, a few he encountered made clear they were thinking about how he would fare going up against Trump. To that end, O'Rourke had the opportunity to tout arguably the best polling news he has received in weeks — a recent CNN survey that showed him doing better against Trump than any other Democratic challenger, defeating the president by 10 percentage points in a hypothetical matchup.

Still, O'Rourke faced Democrats in Iowa who wanted to know more about his approach to Trump. Among them was Joe Nealon, a retired teacher and veteran who told O'Rourke on Sunday afternoon in Red Oak that Democrats should get more combative with Trump, especially when it comes to pointing out that Trump claims to support the military but avoided the draft multiple times when he was younger.

"Biden has been showing that — get personal right back at him and it's popular — it works," Nealon said.

"I do think we need to draw the contrast between us," O'Rourke said. But he added that he worries "that if I were to descend into the name-calling and the pettiness and the personal attacks, we would lose sight of the goals and the aspirations and the ambitions that we have in common, and that's what drove me to get into this race."

While older voters like Nealon were common at O'Rourke's events, he has also tried to put an emphasis on reaching younger people — including those who cannot even vote. That led him Monday morning to Berg Middle School in Newton, where he addressed an eighth-grade civics class that had followed his Senate campaign. Students came prepared with a bevy of detailed questions — not a lot of softballs, O'Rourke deadpanned at one point — including 14-year-old Milan Underberg, who broke down sobbing while pressing him on what he would do to stop school shootings.

"I'm afraid that, one day, I'll go to school and I'll never come out," she said.

O'Rourke gave Underberg the chance to collect herself, lowered his voice and described his usual proposals for reducing gun violence, such as banning assault weapons and implementing universal background checks. He thanked Underberg for speaking up, telling her she is "forcing people in power to do the right thing right now."

And then, not before long, O'Rourke was off to his next stop.