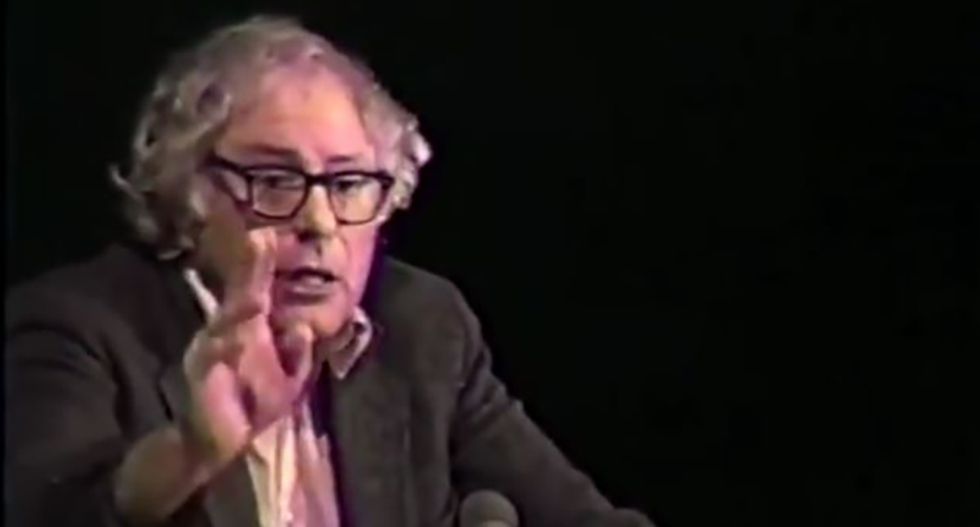 Bernie Sanders explained that Nicaraguan President Daniel Ortega “happens not to be a Communist” (Bernie Speaks, 4/19/88)—an accurate observation that Politico imagined would show up in an attack ad.
Teddy Ostrow
,
FAIR
and
Teddy Ostrow
May 10, 2019

Politico magazine  (5/3/19) took a deep dig into Sen. Bernie Sanders’ “bizarre, charming and, at times, startling cable-access TV show,” Bernie Speaks With the Community—produced in the 1980s when Sanders was mayor of Burlington, Vermont. While the article and accompanying video are relatively friendly to the senator—remarking on his humor (“who knew?”) and other agreeable personality quirks—writer Holly Otterbein’s description of certain clips as “startling” was more eye-opening than anything Sanders actually said.

Rather than explicitly condemning any of Sanders’ statements from the episodes, the piece used the dodge that other people (not us!) might use them against the presidential hopeful. Even though Politico literally paid for all 51 tapes of the show to be digitized, the piece disingenuously noted:

Whatever good it did for Bernie Sanders at the time, Bernie Speaks With the Community is now 1,667 minutes of material for opposition researchers, healthcare insurance companies and Trump’s reelection campaign to pick through.

In other words: We’re just gonna leave this here, with absolutely no motives, after spending hundreds, maybe thousands of dollars digitizing it for anyone who wants to watch. People are using it to attack a Democratic 2020 candidate we just happen to red-bait? Oops! So sorry, Bernie!

Otterbein went on to construct a road map of Sanders’ apparently damaging statements for a hypothetical “30-second” attack ad by “his opponents”:

The Nicaraguan Sandinista leader Daniel Ortega “happens not to be a Communist.” Nora Astorga, the Nicaraguan ambassador to the United Nations who had recently visited Sanders, might have gotten cancer because of the “tremendous grief and suffering that’s going on in her own country” caused by the war. The Soviet Union’s economy is being “devastated” by military spending. And perhaps, as he proposed to a classroom of small children, Burlington should develop an exchange program with communist and socialist countries around the world. “I would like to see families—your mothers and dads and yourselves maybe—go to the Soviet Union and learn about that country, and people from there come to here,” he says. “If you actually had kids here who were from Nicaragua or from the Soviet Union, and they could tell you what’s going on in their own country, boy, you could learn a whole lot. And then if kids from Vermont or Burlington were in those countries, they could tell those people what was going on in their hometown.”

Is it a coincidence that all of the things Politico picked out in their “short, and surely incomplete,” list of supposedly damning Sanders quotes have to do with improving relations with countries the US government and corporate media have stopped at nothing to divide and conquer?

That Nicaraguan President Daniel Ortega “happens not to be Communist”…happens to be true. As Jim Naureckas noted in Extra! (6/05), “Nicaragua under the Sandinistas had a mixed economy, multiple opposition parties and a vocal opposition press, features that were not found in actual Communist countries.” If you actually watch the clip, Sanders’ larger point is that corporate media repeat endless lies about Nicaragua—like the claim that Ortega is a dictator, regurgitated tirelessly by corporate media from the ’80s unto the present day, despite his repeated victories in internationally recognized elections (Extra!, 10–11/87, 1–2/07; FAIR.org, 11/17/08, 8/23/18).

The article might have flagged Sanders’ comment that “grief and suffering” could cause cancer for being a bit wacky. (Can stress cause cancer? Evidence is “weak,” says the National Cancer Institute.) But there’s also a suggestion that it’s absurd, or at least impolitic, to suggest that the US could be responsible for said grief or suffering; a similar suggestion is made elsewhere when Otterbein puts scare quotes around Sanders’ reference to the “immorality” of the US-backed Contra war. FAIR (4/11/16, 3/5/19) has previously shown how corporate media performatively frame Sanders as a red menace for defending—and refusing to denounce—leftist countries targeted by US imperialism.

In this case, Sanders was defending the Nicaraguan people, who suffered immeasurable harm in the Contra war to oust the Sandinista government—the product of a popular revolution that overthrew the murderous US-backed dictator Anastasio Somoza. The “immorality” Sanders was talking about, and Politico calls into question, is the tens of thousands of Nicaraguans killed by US-trained, armed and financed Contra death squads. Maybe Politico has an editorial rule against referring without irony to war crimes as immoral when the perpetrators are backed by Washington.

And because you can’t do a proper red-bait without a Russia connection, Otterbein includes Sanders’ contention that military spending “devastated” the Soviet economy in the list of no-nos. Oddly, the position that Sanders is being attacked for is the conventional wisdom on why the Cold War ended with the collapse of the USSR. As AP (6/5/04) reported when Ronald Reagan died in 2004:

His famed “Star Wars” program drew the Soviets into a costly arms race it couldn’t afford…. He is vividly remembered in Russia today as the force that precipitated the Soviet collapse.

“Reagan bolstered the US military might to ruin the Soviet economy, and he achieved his goal,” said Gennady Gerasimov, who served as top spokesman for the Soviet Foreign Ministry during the 1980s….

Even though Reagan’s “Star Wars” never led to the deployment of an actual missile shield, it drew the Soviets into a costly effort to mount a response. Many analysts agree that the race drained Soviet coffers and triggered the economic difficulties that sped up the Soviet collapse in 1991.

But underscoring the US’s hand in another country’s economic demise conflicts with the narrative of the natural collapse of socialism, in which corporate media are heavily invested. Corporate outlets systematically overlook the fact that when the United States wages economic warfare, for whatever reason, it produces catastrophic effects on the economies and people of its “enemy” targets.

Regarding Sanders’ more lighthearted desire for leftist/capitalist nation exchange programs, as Branko Marcetic pointed out, they already existed long before the 1987 clip. Even if they didn’t, though, what’s so scandalous about cultural exchanges that ameliorate interactions between hostile nations? If anything, exchanges might humanize foreigners who the US government and media have often dehumanized, and dispel the lies they push about nations to justify imperial aggression.

Now, I haven’t watched all the tapes. It’s very possible that Bernie Sanders said something “startling” in the 51 episodes of Bernie Speaks—but if he did, Politico didn’t find it. Instead, the publication showed us its own failure to dislodge from the corporate media’s anti-Communist, neo–Cold War worldview. In a Sanders story that tried to play nice—a rare find in establishment outlets—Politico nonetheless gave us a peek at US media jingoism that was past its sell-by date nearly three decades ago.

Anyway, thanks for the funny tapes, Politico.