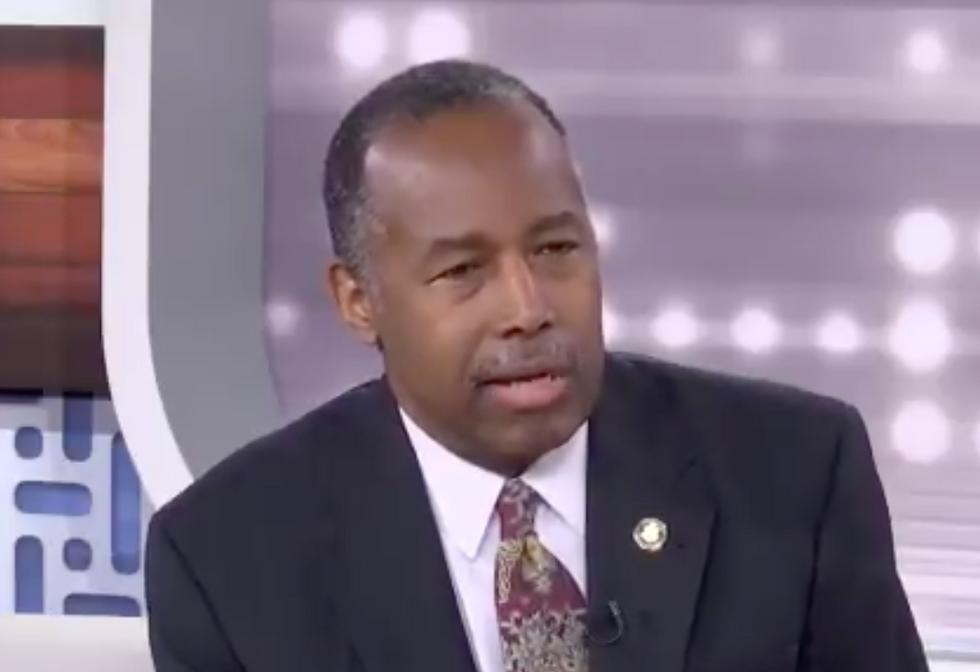 The embarrassment arose from a congressional hearing in which Porter asked Carson about REOs, and he thought she said "Oreo." When she asked him if he knew what the term meant, he said "Real Estate Organization," when in fact it means "Real Estate Owned," a term referring to foreclosed properties. Many argued that the error revealed Carson's troubling lack of knowledge about his own department.

At first, he tried to laugh off the gaffe, posting a tweet with a picture of Oreo cookies. But there was nothing clever about the response, and it just further emphasized his ignorance.

So he appeared in an interview with The Hill TV on Wednesday where he tried to claim he knew what he was talking about.

It's not an entirely unreasonable claim; sometimes people know what acronyms refer to without knowing what their letters mean. But it doesn't really make sense as a defense of Carson's performance. His initial confusion came when Porter referred to an "REO," which he misheard as "Oreo." If Carson were so familiar with REOs that he throws the phrase around all the time without thinking about what it means, why would his first instinct be to assume that a congresswoman was talking about cookies in an oversight hearing? And if Carson really did know what "REO" referred to, but just didn't know what the "O" meant, "organization" wouldn't have been a good guess — a "real estate organization" doesn't sound like a class of property.

More plausibly, Carson could have just said he was frazzled and his mind drew a blank. But he didn't offer that explanation, and what he said made little sense.

He also lashed out at the media for covering the gaffe.

"They try to take those moments to ridicule people because they’ve probably read Saul Alinsky’s book and they know that’s one of the rules," he said. "I just hope for the sake of our young people, and for the sake of our nation in general, that we can move beyond the silliness and actually begin to address the problems."

Well, an actual problem in the country is that the executive branch leadership often seems to have no idea what it's doing and no interest in the public good. And no one in the media needs to read the book "Rule for Radicals" to know that a Cabinet secretary displaying their ignorance is an important story.

And the subject matter itself, as Porter noted, is paramount, because foreclosures deeply impact people's lives. But Carson is also brushing off her concerns.

"One of the reasons that I told her I would like for her to meet with our people is because she was a subject matter expert in that 10 or 15 years ago," he said. "At that time we did have a lot of REO properties, we had over 65,000 of them. Now we have only about 6,500 and we do everything we can to keep families who are affected from foreclosure."

He continued: "That's why the number is down so low. I think that she obviously is thinking about the way things used to be and has no idea what’s going on now."

Completely unmentioned by Carson is the fact that 10 years ago we were in the grips of a financial crisis driven by excesses the real estate market, which triggered a massive wave of foreclosures. He tried to take credit, preposterously, for having a lower foreclosure rate than the country faced in the depths of the Great Recession. And yet he has the gall to accuse Porter of not knowing what she's talking about.