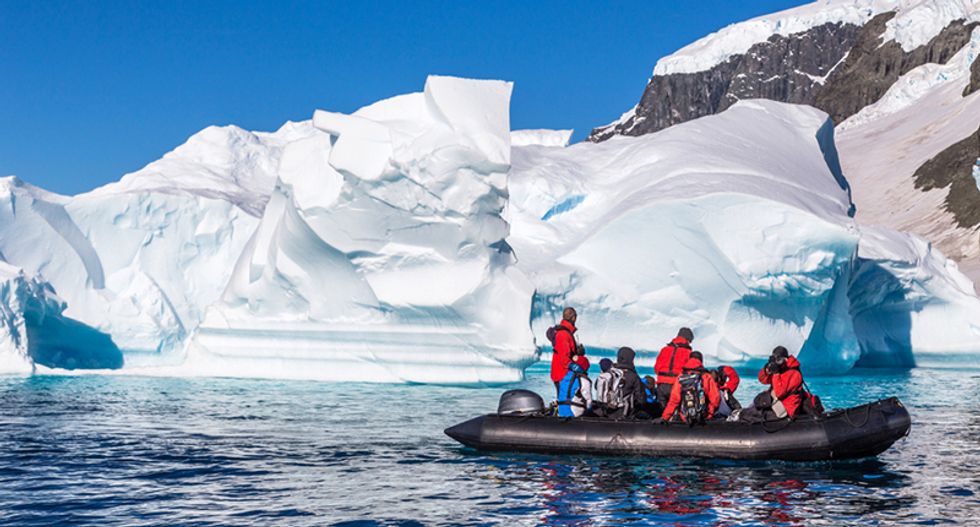 Recent findings on Antartic ice shelves show that they are susceptible to ice sheet mass melt from the heating of the atmosphere and ocean due to human-made greenhouse gas emissions. Nowhere is the phenomenon more noticeable than at the northernmost area of the continent, the Antarctic Penninsula.

The Antarctic Penninsula is one of the “most rapidly warming regions of the world during the twentieth century1 where ~75% of the ice shelves have already retreated over the past 50 years2,3.  This retreat durably affects the stability of the regional glaciers and the ice sheet mass balance, which ultimately contributes to the eustatic sea-level rise”.

Named after Captain Carl Anton Larsen, the Larsen Ice Shelf is a long sheet of floating ice. A closer look reveals the shelf is a series of four major segments that “occupy or used to occupy” the Larsen shelf. From north to south, the segments are called Larsen A (the smallest), Larsen B, and Larsen C (the largest) by researchers who work in the area.[3]  Further south, Larsen D and the much smaller Larsen E, F and G are also named.[4]”

The Larsen A Ice Shelf collapsed in 1995 and Larsen B followed in 2002. Larsen B, dotted with meltwater lakes were heavy enough to buckle the sheet before the collapse. Scientists believe that it was these lakes that fractured the ice and ultimately led to its demise. Now the same process appears to have begun again on Larsen C, the largest of the Larsen shelves and the fourth largest on the continent.

For the first time, a research team co-led by CIRES-based scientists, has directly observed an Antarctic ice shelf bending under the weight of ponding meltwater on top, a phenomenon that may have triggered the 2002 collapse of the Larsen B ice shelf. And ice shelf flexure could potentially impact other vulnerable ice shelves, causing them to break up, quickening the discharge of ice into the ocean and contributing to global sea level rise.

“During the melting season, lakes may form on the surface of ice shelves, pooling the weight of melting snow and ice into many areas of liquid water,” said coauthor Ian Willis, CIRES sabbatical visiting fellow also from SPRI at Cambridge.

Meltwater lakes can contain water weighing fifty thousand to two million tons each, and that pushes downward on the ice, creating an indent. If the lake drains, this indent pops back up. If the resultant stress is large enough, the ice surrounding the lake basin weakens, and may start to break, the researchers predict.

Glacier researcher Peter Kuipers Munneke from Utrecht University’s (UU) climate institute IMAU was the leader of the study in which UU cooperated with several institutes from the UK and the US. Kuipers Munneke was surprised by the findings. “The meltwater lakes occur on the Larsen C ice sheet, a large floating glacier in the north of Antarctica, where a large iceberg broke off just last July. We hadn’t expected it to melt so much there in the winter, because it’s so dark there, and the sun provides absolutely no heat. Four years ago, we installed a weather station there to study why so much snow melts in the area. Unexpectedly, it’s due to the melting in the winter, which appears to be caused by the warm wind.”

Around once per week, an extremely warm, dry wind blows down from the mountains to the west of the ice sheet. This foehn wind can raise the temperature by 15 to 20 degrees in just a few hours. Kuipers Munneke: “All of the winter heat comes from the foehn wind, there is no other heat source this period of year. During a strong foehn, so much snow can melt that it forms huge lakes on the surface of the ice. We had known about these lakes during the summertime, but apparently 20 to 25 percent of the meltwater from the past few years actually occurs in the winter instead.”

Thanks to the new radar images, the researchers can also see that the meltwater re-freezes over the course of the winter. Kuipers Munneke: “Both of the times, the lakes developed in May, the start of the Antarctic winter. Later in the season, the water re-froze, creating slabs of ice over those locations. Consequently, the meltwater doesn’t flow into the sea, so it doesn’t contribute to rising sea levels either.”

However, the discovery may have consequences in the future. “Over the past few decades, large floating glaciers have broken off from the Antarctic mainland. That was in some cases caused by the fact that large meltwater lakes had made some of the ice sheets unstable. We may be observing a process that might create meltwater lakes over a much larger area in the future. We expect that there will be many more winter melt days as time passes. Not only because global temperatures are rising, but also because a warmer world means a stronger westerly wind in the southern hemisphere. And that increases the foehn winds that cause winter melting in Antarctica.”

Though the ice shelf collapse by itself does not cause sea level rise as it is floating, it's known that the tributary glaciers behind the former Larsen A&B shelves rapidly accelerate - which does contribute to sea level rise by emptying land ice into the ocean.

The role of Ice Buttressing:

In architecture, the term “buttress” is used to describe pillars that support and stabilize buildings, for example ancient churches or dams. In analogy to this, buttressing of ice shelves can stabilize the grounded ice sheet (see this blog article about the marine ice sheet instability). It can be understood as a backstress that the ice shelf exerts on the grounding line – the line that separates the grounded ice from the floating ice shelves. When an ice shelf thins or disintegrates, this stress can be reduced, then the ice flow upstream is less restrained and can increase.

This effect has been widely observed in Antarctica: the thinning of ice shelves in the Amundsen Sea is driven by the ocean and linked to ice loss there (see this blog article) and after the spectacular disintegration of Larsen A and B ice shelves the adjacent ice streams accelerated.