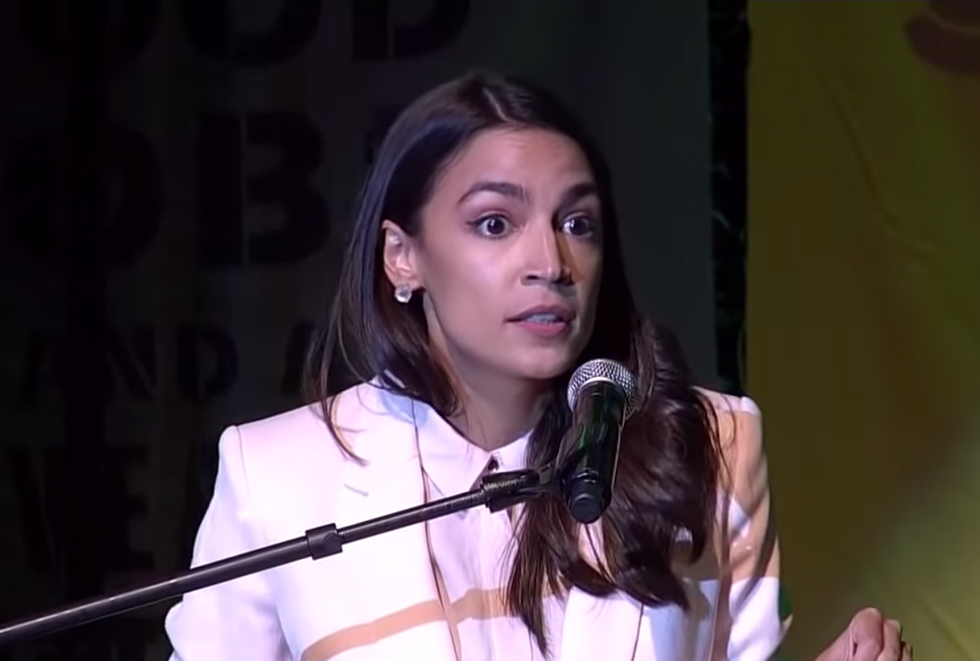 Congress and presidential candidates who claim incremental measures will solve the climate crisis and vowed not to allow Republicans or centrist Democrats to hamstring the push for a Green New Deal.

The New York Democrat noted that many of the Green New Deal's critics were in office decades ago and held on to their seats as carbon emissions skyrocketed and NASA scientists began warning that the climate was changing as a result.

"I will be damned if the same politicians who refused to act then are going to try and come back today and say we need a middle-of-the-road approach to save our lives," Ocasio-Cortez said.

"And I will be damned if the same politicians who refused to act then are gonna try to come back today say we need… https://t.co/xKTtIEVN9y
— People for Bernie (@People for Bernie) 1557798306.0

Ocasio-Cortez is a co-sponsor along with Sen. Ed Markey (D-Mass.), of Green New Deal legislation which the pair introduced in February. The bill calls for a "national mobilization" to create green jobs and a new energy infrastructure using 100 percent renewable sources like wind and solar power by 2030. The plan has the support of 72 percent of Democratic according to a Morning Consult poll released in February.

At the Monday rally, Sanders also condemned powerful centrists, many of whom he said enable fossil fuel companies.

Oil, gas, and coal executives "lie and lie and lie and spend hundreds of millions of dollars to buy out politicians who also tell their lies," said Sanders. "This is a corrupt system."

Instead of endorsing the Green New Deal, Pelosi has pushed in recent weeks for a vote on re-entering the Paris climate agreement, which President Donald Trump left in 2017.

Ocasio-Cortez welcomed such a vote, but toldBloomberg News, "The idea that we can just reintroduce 2009 policies is not reflective of action that is necessary for now in the world of today."

A recent Reuters report said Biden, if elected president, would seek a "middle ground" policy on combating the climate crisis. The former vice president is reportedly planning to deliver a speech outlining his climate policy agenda by the end of May.

In fresh comments on Tuesday, Biden responded to criticisms of his reported "middle road" approach by claiming, "I've never been middle of the road on the environment."

Biden asked critics to look at his record. "You'll find that nobody has been more consistent about taking on the environment and the green revolution."

The Sunrise Movement says it is eager to hear Biden's plans and hopeful that he'll align himself with the national grassroots campaign, presidential candidates including Sens. Bernie Sanders and Elizabeth Warren, and 104 members of Congresswho have pledged to back the Green New Deal.

"We're nervous about where he stands," spokesperson Stephen O'Hanlon told CNN on Monday, "but there's time for him to do the right thing."

The Sunrise Movement's nationwide tour is over, but the group says it is continuing to push for the Green New Deal through the work of local chapters all over the country.