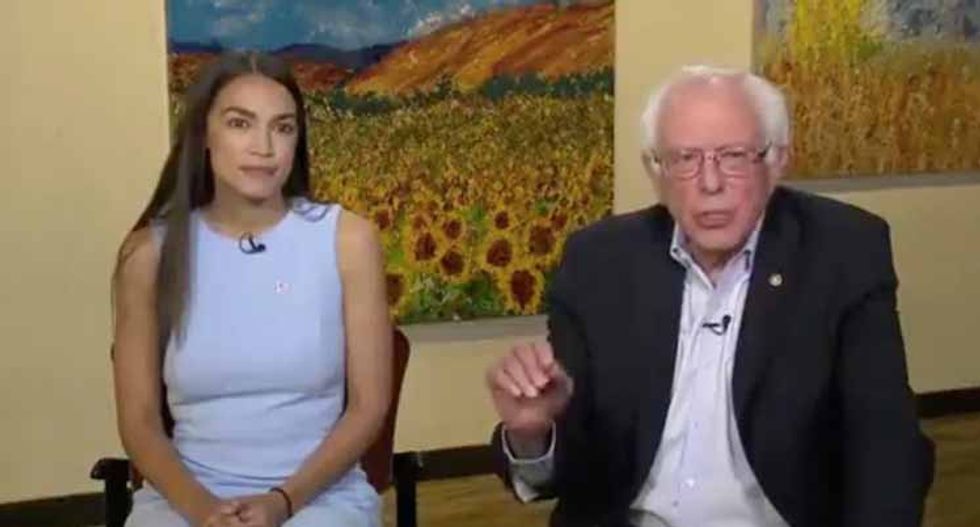 Today’s loan sharks wear expensive suits and work on Wall Street, where they make hundreds of millions of dollars in total compensation by charging sky-high fees and usurious interest rates,” Sanders and Ocasio-Cortez said in a statement accompanying the plan.

They have been reaching record levels as the Fed raised key interest rates and the industry prepares for the next recession.

Ocasio-Cortez (D-N.Y.) will introduce the House version of the bill.

Under the legislation, in addition to an 15 percent federal cap on interest rates, states could establish their own lower limits.

The proposal is sure to meet stiff resistance from the banking industry, which brought in $113 billion in interest and fees from credit cards last year, up 35 percent since 2012, according to S&P Global Market Intelligence.

The new legislation would “effectively put the payday-lending industry out of business, paving the way for postal banking.”

The bill is called the Loan Shark Prevention Act, and it’s only two pages long. It includes language that would prevent lenders from adding fees to “evade” the interest rate cap and sets penalties for violators, including a forfeiture of all interest on the illegal loans.

The real consumer savings from the Loan Shark Prevention Act would come from other short-term, small-dollar loans, which in an age of precarious finances at the low end have become commonplace. Payday loans carry annual percentage rates as high as 667 percent.

.@AOC & @BernieSanders team up on new legislation that would effectively put the payday-lending industry out of bus… https://t.co/qzTj2A9unj
— Ryan Grim (@Ryan Grim) 1557409042.0

The 15 percent cap would be the same as the one Congress imposed on credit unions in 1980, Sanders said. (The National Credit Union Administration, the industry’s regulator, raised that cap to 18 percent in 1987 and has repeatedly renewed it at that higher level.)

Americans will pay $122 BILLION in credit card interest this year. Thats the equivalent of every household funneling $1,000 to Wall Street.

Rising credit card rates hit those with the lowest credit scores the hardest.  “And even small increases in rates can be crippling to a cash strapped borrower, he said. “It is the ultimate slap in the face when you’re already down.”