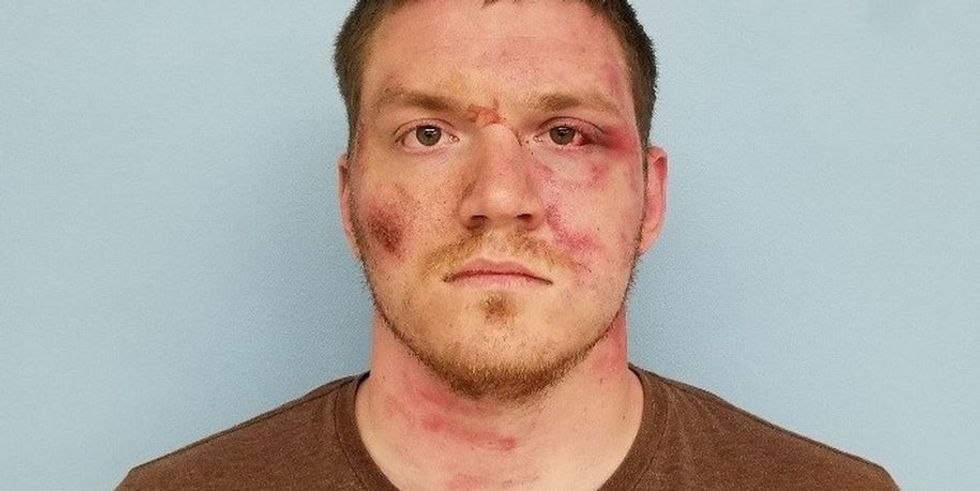 While protesting Black Lives Matter activists and the FBI’s “black identity extremists”remain popular bogeymen in the eyes of law-and-order conservatives, a man in Alabama recently reminded us once again that, in fact, the most lethal threat to police lives from a radical terrorist element in the United States comes from the white far right.

Three police officers were shot, one of them fatally, when they responded to a domestic disturbance call in Auburn on Sunday night. The man arrested shortly afterward, it soon emerged—Grady Wayne Wilkes, 29, a veteran from Auburn—was fond of posting memes from the alt-right online gathering spot 4chan, most of them mock humor about guns, white nationalist trolling signals, and encouragement for Proud Boys-style violence against left-wing protesters, who he described as “leftist scum.”

Auburn Police said that the three officers—William Buechner, Webb Sistrunk, and Evan Elliott, all veterans of the department—shot by Wilkes had arrived at the scene of a domestic disturbance when he emerged suddenly, wearing body armor, and opened fire. Buechner was killed at the scene; Sistrunk and Elliott both survived, but remain hospitalized for their wounds.

Wilkes was arrested nine hours later, less than three miles away. In addition to the charges for shooting three police officers, he also faces attempted strangulation and domestic violence charges for his assault on the woman police found at the home.

The shootings led Alabama officials to issue their first invocation of the newly enacted “BLUE Alert,” when a law enforcement officer has been killed or injured and the perpetrator is still at large. It ended with Wilkes’s capture.

Despite much of the mythology surrounding black protests of police mishandling of minority populations, Black Lives Matter has never advocated violence in any fashion or permitted it within its ranks—though one black man, Micah Xavier Johnson, who killed six Dallas police officers in 2016, used rhetoric similar to BLM’s, he had never been a member or participant.

In contrast, the single-most consistently lethal threat from violent radicals to police officers for most of the past two decades has come from the white extremists of the “sovereign citizen” movement. There’s a reason they are recognized as perhaps the No. 1 domestic terrorism threat by the FBI.

There’s no evidence that Wilkes was a sovereign citizen—rather, he appears to have been radicalized online at 4chan. It is also not clear that he opened fire on the officers for any ideological reason, but his body armor suggests he had prepared for this kind of confrontation.

Between 2008 and 2016, white sovereign citizens murdered nine police officers and injured more than a dozen others in 16 incidents spread around the country. The most recent sovereign-citizen police murder occurred in 2017 in Montana, when a sheriff’s deputy was gunned down during a routine traffic stop.