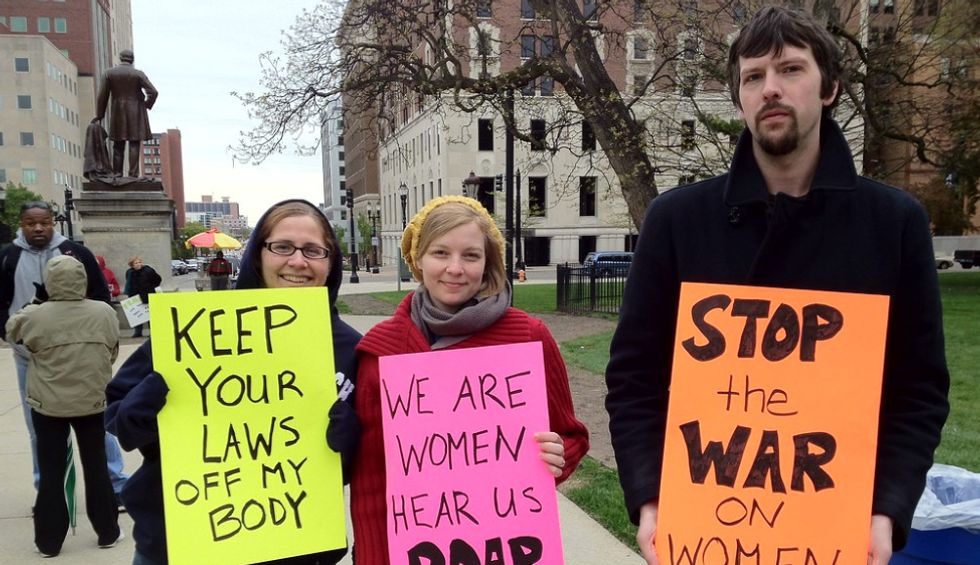 But this latest round of repressive laws follows a huge number of abortion restrictions passed nearly 10 years ago, when Republicans captured many state houses and governor posts in the 2010 midterm election. Those laws also came in reaction to the passage of the Affordable Care Act, which sought to ensure greater coverage of reproductive care for women.

Never mind the fact that two-thirds of Americans want Roe v. Wade left in place, ensuring access to legal abortions. Never mind that similar percentages of men and women in the U.S. have the same attitude of support about abortion. By party, only a plurality of Republicans—48 percent to 45 percent—want to ban abortion completely, while Democrats want to keep it, 87 percent to 11 percent. And this is no surprise: Support for legal abortion is highest among the youngest voters and the most educated voters.

Public support for legal abortion hasn’t really changed all that much in recent years. What has changed is new incendiary language by Republicans, as they spout nonsense about “being born alive,” “protecting abortion survivors,” and “infanticide,” all while trying to strike a holier-than-thou attitude and citing religion as their excuse. But although using such language is an attempt to gin up the evangelical base (or rally the troops at a Trump rally), it does little to change public opinion.

We need to remember that this latest push isn’t the first time Republicans in charge of statehouses passed ultra-restrictive laws. Although some ultimately didn’t survive court challenges, many of the laws passed earlier in the decade remain on the books. For all practical purposes, these laws made abortion unavailable in several states: A Washington Post analysis shows that “Kentucky, Mississippi, Missouri, North Dakota, South Dakota and West Virginia each have only one abortion clinic left because of legislative restrictions.”

Here’s what happened to the availability of legal abortion in 2011, from a roundup by The Washington Post:

2011 marked a sea change for abortion rights. States passed 83 laws restricting access to abortion, nearly four times the 23 laws passed in 2010. A lot of that had to do with the 2010 elections, which ushered in a wave of Republican legislators and governors. This year, the number of states with fully anti-abortion governments — in which both the governor and the legislature oppose abortion rights — increased from 10 to 15.

That cleared the way for new restrictions. Five states banned all abortions after 20 weeks of gestation; until last year, only Nebraska had such a restriction. Seven now require an ultrasound, or the offer of one, prior to the procedure. Eight will no longer allow private insurance plans to cover the procedure.

The GOP attempts at restrictions didn’t begin or end in 2011. A 2013 report by the Guttmacher Institute summed up the bad news: “More State Abortion Restrictions Were Enacted in 2011–2013 Than in the Entire Previous Decade.”

This legislative onslaught has dramatically changed the landscape for women needing abortion. In 2000, the two states that were the most restrictive in the nation, Mississippi and Utah, had five of 10 major types of abortion restrictions in effect (see Appendix). By 2013, however, 22 states had five or more restrictions, and Louisiana had 10.

In 2000, 13 states had at least four types of major abortion restrictions and so were considered hostile to abortion rights (see Troubling Trend: More States Hostile to Abortion Rights as Middle Ground Shrinks); 27 states fell into this category by 2013. …

The most recent Guttmacher report gives an overall list of restrictions that have only grown over the years, and breaks them down, state by state:

The new abortion bans masquerading as “fetal heartbeat laws” in Alabama, Ohio, Georgia, and elsewhere are being challenged, but not only in court. After women grew skilled at holding public protests following Trump’s election (remember the millions of people at each Women’s March in 2017 and 2018), voters and candidates both see this new fight over abortion as an issue that could play a major role in the 2020 election. The Democratic women running for president aren’t being shy in their language. From a Huffington Post story:

“Access to safe, legal abortion is a constitutional RIGHT,” Sen. Elizabeth Warren (D-Mass.) tweeted. Sen. Kirsten Gillibrand (D-N.Y.), who’s made women’s rights the centerpiece of her flagging campaign, appeared at a pro-choice rally in Georgia. “As a party, we should be 100 percent pro-choice, and it should be non-negotiable,” she said in a Washington Post interview. Sens. Kamala Harris (D-Calif.) and Amy Klobuchar (D-Minn.) were similarly vocal.

While many of the many Democratic men running for president also issued statements, there was something different ― more personal, more passionate ― about the way the women responded. It felt unprecedented. Powerful. ...

The abortion battle feels like an inevitable next step in what’s been a growing war on women that escalated the day Donald Trump was elected and has only felt more palpable every day since ―  the marches, MeToo, the Kavanaugh hearings.

Since the onslaught of new laws, the Democratic hopefuls are stepping up their game. Warren and Gillibrand are proposing legislation to ensure abortion access, including getting rid of the Hyde Amendment, which disallows any public funds to pay for abortions. Kamala Harris raised more than $160,000 for abortion groups. Cory Booker is proposing an “Office of Reproductive Freedom” in the White House.

And a few states are stepping up to ensure abortion access. The Nevada Assembly, with its majority of women lawmakers, passed a bill to decriminalize abortion and remove some decades-old abortion requirements. A Vermont bill about to become law states that abortion is a "fundamental right" and protects the right to contraception, sterilization, and family planning. The Illinois Reproductive Health Act also lists abortion as a fundamental right and would require insurers to cover the procedure. It is still stuck in a subcommittee, but some legislators (mostly women) are working to move it forward.

Given the success of women candidates in 2018, when many didn’t shy away from talking about abortion and reproductive rights, there’s no reason to think that candidates won’t be vocal in their support, especially in Democratic primaries, when the vast majority of voters will be pro-choice anyway. The issue also is driving up the number of women candidates in states where such laws have been enacted.

It’s hard to believe that the right-wing base could grow even more excited about fighting abortion than they are now. Some legal experts doubt whether these laws would even make it to the Supreme Court. But whatever the eventual legal outcome, fighting for women’s reproductive health could drive Democratic voters, as well.