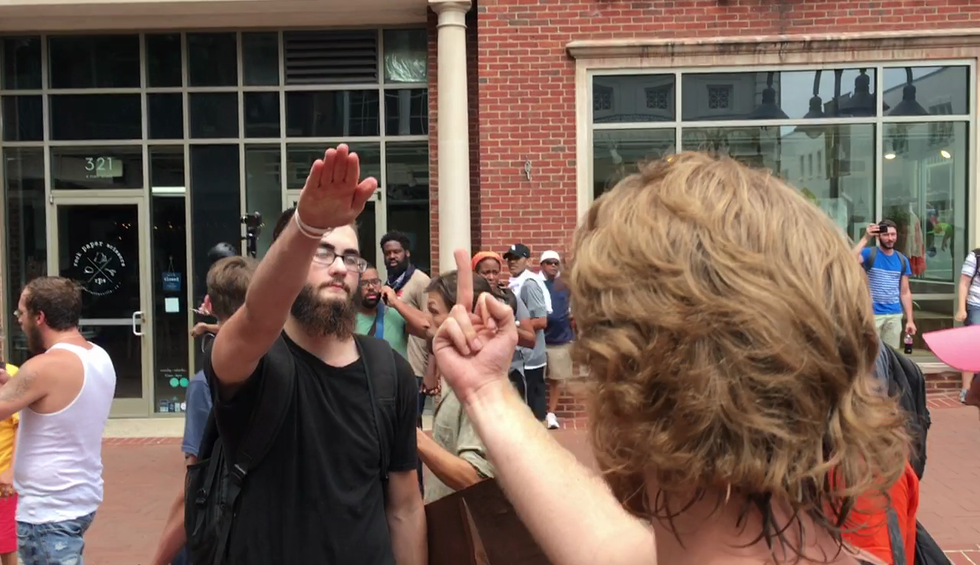 While tweets from parents often go viral on Twitter, those that do tend to lean quirky or otherwise heartwarming. But tweets from Keith Gamble allege a story concerning his 11-year-old daughter that is disappointing, to say the very least.

As Gamble tells it, his 11-year-old daughter, who attends the McFadden School of Excellence in Murfreesboro, Tennessee, was taken out of class and sent to the principal’s office last Thursday. Gamble says that she was punished after telling her classmates to stop giving the “Sieg Heil” Nazi salute in school. He reports that his daughter had shouted, “Stop it, put your hands down now,” to a group of her peers. Then the teacher sent her to the principal’s office.

According to Gamble’s tweets, his child’s classmates made the disgusting sign many times in the classroom. Where did this come from? Apparently, a teacher told one student to make the gesture as part of a history project. The student was portraying Adolf Hitler (in costume, which is ... a highly questionable decision) and was to give the salute at the end of his speech.

Some 10 to 20 students then gave the salute in response, which upset Gamble’s daughter. But the story doesn’t end there. According to Gamble, students had been giving the salute around school even outside of this lesson.

Please comment with support for my 11-year-old daughter. She was removed from class and sent to the principal’s off… https://t.co/uRzrXolVQd
— Keith Jacks Gamble (@Keith Jacks Gamble) 1557847463.0

Gamble noted that his daughter has been bullied by kids using the Nazi salute at school and feels lonely. She feels targeted, but has the support of her family— and now, obviously, of the internet.

How is the school responding? Gamble shares updates on that, too.

James Evans, a spokesperson for Rutherford County Schools, told BuzzFeedthat "During rehearsal on Thursday, May 9, the student gave his presentation, and when he gave his salute, some other students in the class responded with the same salute. When this occurred, one student became upset and had an outburst." Evans said that the child’s teacher tried to calm her "but was unable to do so." He said that the teacher called the girl’s mom and took her to the principal's office. In his statement, Evans stresses that the girl was taken to the principal “to talk about what had happened.”

According to Evans, the principal confirmed two times that students gave the Nazi salute outside of the classroom project. "In addition, the school will no longer feature a student portraying Hitler or the salute as part of the Living History project," Evans noted. "The school will find alternative means of covering the fifth-grade history standard."

That should be pretty obvious. There’s really no reason to be teaching kids how to do the salute, or encouraging them to do it, even “in character.” It’s (understandably) upsetting, and could be triggering for plenty of students. Also, kids lack emotional maturity and adult logic: They might see the salute as a way to get a rise out of a peer, but not fully grasp its implications. Even if it’s not their intention (and that’s giving the benefit of the doubt), it’s still guiding kids to do something that, if repeated out of context, can do a whole lot of harm.

Evans told HuffPost that the Living History project was “intended to be an interactive way for the students to learn the history standards for fifth grade. It was never intended to be offensive and the salute was definitely not encouraged to be performed by the other students.”

At this point, we’ve seen numerous cases of students making a joke out of Nazism. The teenagers who sent a Nazi-themed invitation to a Valentine’s Day dance. Or the students who seemingly gave the salute when taking pictures at their prom. Without a doubt, it’s not just sad; it’s also scary.

What do you think about this “Living History” lesson?