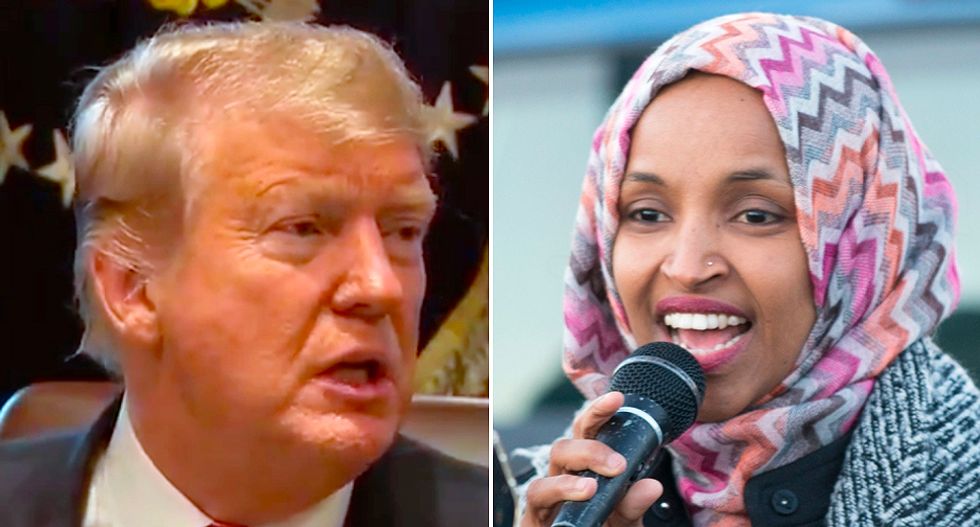 A South Florida supporter of President Donald Trump has been arrested for allegedly threatening to murder four prominent, top Democratic lawmakers, after he reportedly left vile, profane, threatening, racist, and homophobic voicemails for three of them. He also touted his support for President Trump in several of his voicemails. he was charged with making threatening communications.

"In all three messages, Kless referenced his hatred for Minnesota Congresswoman Ilhan Omar — repeatedly calling her a 'towel head' and a member of the Taliban," the New Times reports.

The Miami Herald adds that Kless "allegedly said he’d like to throw Omar off the Empire State building."

"It was your Taliban bitch, the one who opened up her fucking towel head mouth about how 'some people did it,'" Kless allegedly said in his message to Rep. Tlaib, according to the New Times. "You know what? She's lucky she's just getting death threats, bitch. So are you. Alright? You're lucky they're just threats. Motherfucker. Cause the day when the bell tolls, whore, and this country comes to a war, there will be no more threats. Your life will be on the fucking line."

"No one wants to fucking hear you or that other little whore," he allegedly continued. "I'd like to take that bitch and throw her right off the Empire State Building, that fucking whore. Tell her to shut her fucking mouth, you fucking fuck her all the time probably. So tell her to shut the fuck up, all right? From one towel head to another. You stanking, fucking smelly fucking bitch. Fuck off. I wish all of you the worst, you can go fuck off in life. Fuck you and fuck Mohammed too. You bitch fucking cunt."

The Mercury News reports Klass' "profanity-filled voicemails also appeared to refer to a video that President Trump posted on Twitter a few days earlier that interspersed footage of Minnesota Rep. Ilhan Omar and the 9/11 attacks. Tlaib and Omar are the first Muslim women elected to Congress."

“Tell your Taliban friend to shut the f— up about 9/11, this ain’t Trump’s fault, b—–, it’s all your people’s fault,” Kless said in a message to Tlaib, according to the complaint. “You definitely don’t tell our president, Donald Trump, what to say.”

In his voicemail threatening Rep. Swallwell, who is running for president on a platform of gun reform, Kless accused the California Congressman of being a "communist."

"The day you come after our guns, motherfucker, is the day you'll be dead," Kless allegedly said. "You're gonna die. Don't wanna do that shit, boy. You'll be [on] your death bed, motherfucker, along with the rest of you Democrats. So if you want death, keep that shit up, motherfucker."

In his threat to Senator Booker, he called him a "monkey," used the "N" word, and said he wanted to kill Black men like the senator, the New Times reports.

"You're a fucking disgrace," Kless allegedly said. "We need to kill all you motherfuckers, man, every fucking one of you, man."