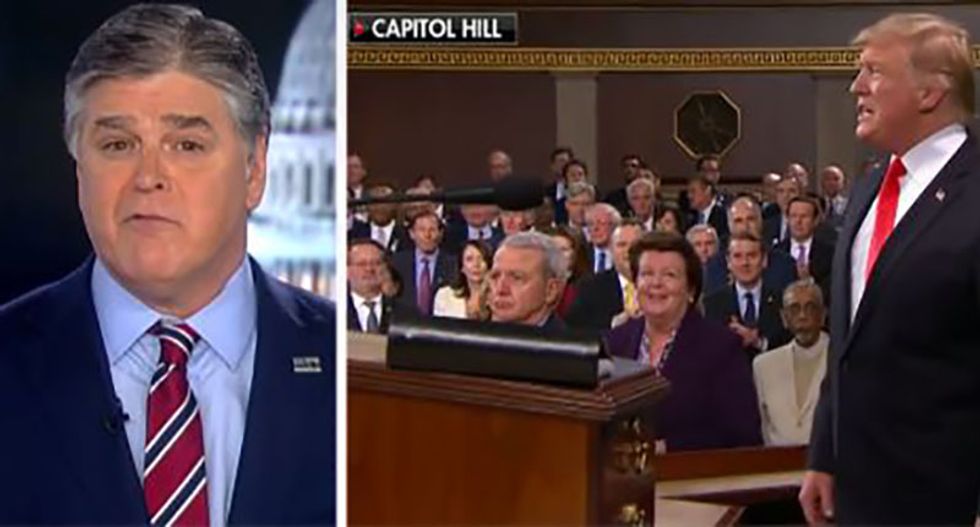 A new book details the alleged influential "hold" that Sean Hannity, the host one of Fox News' top-rated programs, commands over President Donald Trump and Republican members of Congress alike.

"I think that that was one of the stunning things throughout the book that we detailed is him being on conference calls with Republicans, with the president around health care," Politico's Amanda Palmer, who co-authored "The Hill to Die On" with her colleague Jake Sherman, told CNN host Alisyn Camerota on Wednesday. "We also have members of Congress leaving private meetings where they're deciding what they're going to do on major issues, and the first call is Sean Hannity."

When Camerota asked whether Hannity reaches out to Trump and congressional Republicans or vice versa, Sherman said that it goes "both ways. During the shutdown, Jim Jordan was in almost constant contact with Sean Hannity over it. And this isn't a criticism of them, but it shows Sean Hannity's hold on members of Congress and on the president."

Camerota's "New Day" co-host John Berman then joked about the topic by referring to the Fox News anchor as "Senate-confirmed Sean Hannity," echoing a funny made earlier in the segment by Camerota, who said: "Let’s talk about the vice president, Sean Hannity."

Last year, New York magazine described the alleged closeness of Hannity's relationship with Trump in a detailed article titled, "Donald Trump and Sean Hannity like to talk before bedtime." Journalist Olivia Nuzzi characterized Hannity as an informal adviser to the president and someone who Trump believes to share his own political philosophy. She wrote:

More than most politicians, Trump abides by the Groucho Marx law of fraternization. He inherently distrusts anyone who chooses to work for him, seeking outside affirmation as often as possible from as vast and varied a group as he can muster — but Hannity is at the center. “Generally, the feeling is that Sean is the leader of the outside kitchen cabinet,” one White House official said, echoing other staffers (current and removed). I was told by one person that Hannity “fills the political void” left by Steve Bannon, a statement Bannon seemed to agree with: “Sean Hannity understands the basic issues of economic nationalism and ‘America First’ foreign policy at a deeper level than the august staff of Jonathan Chait and the fuckin’ clowns at New York Magazine,” he said. The White House official assessed the influence of White House officials and other administration personnel as exactly equal to that of Fox News.

The Los Angeles Times also reported in 2017 that Trump often reaches out to Hannity after watching his show to discuss the topics covered by the Fox News host on his program.

Salon reached out to Fox News for comment prior to the publication of this story.