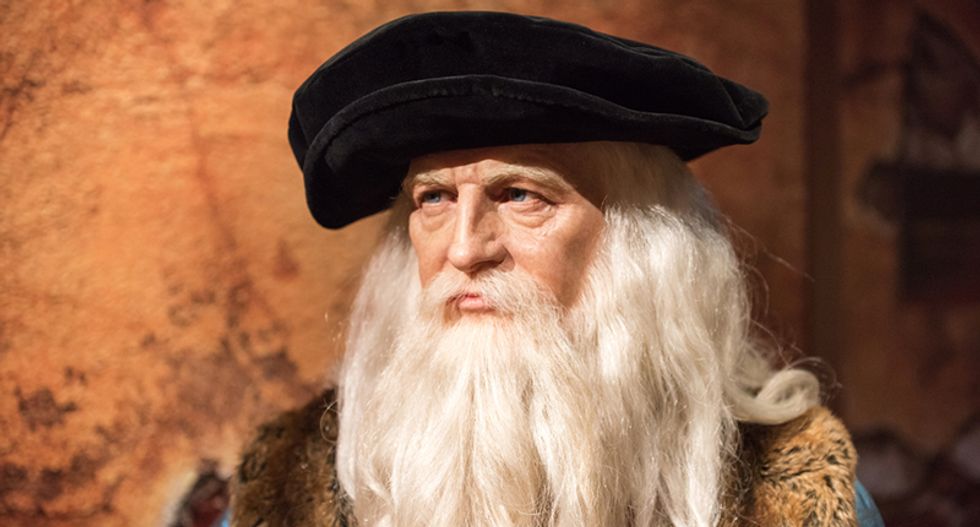 On the 500th anniversary of Leonardo da Vinci’s death, Italian academic Francesco Caglioti’s recent claim that a sculpture held at a London museum bears close similarities with the work of the Renaissance genius has opened up a fresh discussion.

The Victoria and Albert Museum in London has been cautious and said: “A potential attribution to Leonardo da Vinci was first proposed in 1899, so Professor Caglioti’s study opens up the discussion of its authorship afresh.”

It is a charming and jovial image of “The Virgin with the Laughing Child,” in which the young Mary appears to be enjoying the magic of motherhood with her son resting comfortably on her lap. Baby Jesus has a joyous expression as he entwines his right hand with his mother’s left.

Whatever the final outcome on this finding, as a scholar of religious art, I would suggest that, beyond the immediate charm of his art creations, Leonardo invites viewers into a religious message.

Leonardo’s Virgin and laughing child expresses both church teachings and what it means to be a human.

Leonardo: Religion and his art

Leonardo was one of the greatest artists in history. However, very little is known about his early life and even less so about his religious one.

What is known is that he was baptized as an infant in the presence of 10 witnesses and that at the end of his life he asked for a priest to hear his last confession and administer the Last Rites. He was given a Catholic funeral and buried in consecrated ground.

Art historian Luke Syson has argued that Leonardo had solid knowledge of religious symbolism and contemporary Catholic teachings, which he combined with a humanistic approach to his art’s subjects.

An example is how Leonardo transformed the traditional image of “The Last Supper” into a more human-centered drama.

The traditional emphasis of the Last Supper is on the institution of the Eucharist. It forms the scriptural basis for Communion, in which bread is seen to be a symbol for Jesus’ body and wine as a symbol for his blood.

Leonardo, instead, emphasized the announcement of the betrayal by one of the disciples.

He had a large collection of religious books in his personal library and is known to have made regular references in his notebooks to religious ideas.

In fact, much of what is known about Leonardo has been found through the visual evidence of his drawings, paintings and notebooks. And they reveal another side to him.

Beyond being an artist, Leonardo’s creativity expanded into the study of science, human anatomy and military armaments.

The pages of his numerous notebooks are filled with anatomical drawings such as his studies of the fetus and the eye. His study of human anatomy was not simply through live models but more significantly through participation in autopsies. His drawings are used today as illustrations in medical textbooks.

Yet, at the same time, his notebooks are also filled with sketches and drawings of religious figures. His art reflected his meditations on the Bible and his knowledge of Christian symbolism. These were an important basis for “The Last Supper” and his paintings of the Virgin of the Rocks.

From its earliest days, Christian art employed signs and symbols like flowers, animals and colors to identify individuals and ideas. As the majority of the population at the time was unable to read, Christian art was a form of visual literacy. It helped teach stories of faith.

In Leonardo’s time, additional books were being written about the Christian faith, especially those given to episodes in the life of Christ and of his mother.

Leonardo’s sculpture expanded the forms that Christian art had taken until then.

One of the most popular themes of Christian art was that of the Madonna and Child. Madonna meant “my lady,” which was the title for the Virgin Mary from the Middle Ages.

Typically, the Madonna was presented as an elegantly dressed and beautiful woman with a halo and surrounded by angels. The artist’s emphasis was on identifying her as the regal mother and queen of heaven.

Over the course of his life, Leonardo drew and painted many images of the Madonna. Leonardo emphasized Madonna’s humility by removing her crown and halo and replacing her extravagant costumes with simpler dress.

In 1483, he painted the Virgin of the Rocks. This image illustrated a new doctrine on the Immaculate Conception of Mary. This teaching emphasized that with God’s intervention, Mary was conceived without the stain of “original sin” even though she had two human parents. This differed from the belief regarding Mary’s miraculous virginal conception of Jesus.

Typically in images that promoted this teaching, the artist depicted a prayerful Mary dressed in white being elevated by a group of angels. Leonardo painted her as an earthly mother with her young son and his cousin, the young John the Baptist, in a landscape setting.

His paintings of baby Jesus and the Virgin Mary do not simply show “any mother” or “any child.” He both depicted the naturalness of their relationship and touched upon the religious meaning of their identities. He also emphasized the emotional intimacy between the two.

He communicated ideas and feelings through their hand gestures, facial features and body poses.

Both divine and human

As scholars of cultural history like Lawrence Cunningham and John Reich have noted, Leonardo was interested in a Renaissance worldview which centered around the human person. This interest resulted in not only his works that depicted a natural view of the human body but one that explored the personalities of the individuals he drew and painted.

Even as the final word is awaited from Victoria and Albert Museum – and it might take many years to resolve – I would agree with the scholars who support the view that The Virgin with Laughing Child bears Leonardo’s hallmarks.

The mother is dressed, but the child is totally naked. While this naturalism of their human figures is typical of the Renaissance, what I propose is that the presentation of a laughing but naked baby Jesus made visible the complex theological idea of the Incarnation – that God became flesh in Jesus.

For Christians, Christ was the unique son of God who was miraculously human and divine at the same time. He was identified in the New Testament as “…the Word was made flesh…”

In all his art, Leonardo made this visible through the joyful demeanor of baby Jesus and the obvious display of his fully human form. Simply put, Leonardo illustrated how Jesus’ humanity came from his mother and his divinity from God.