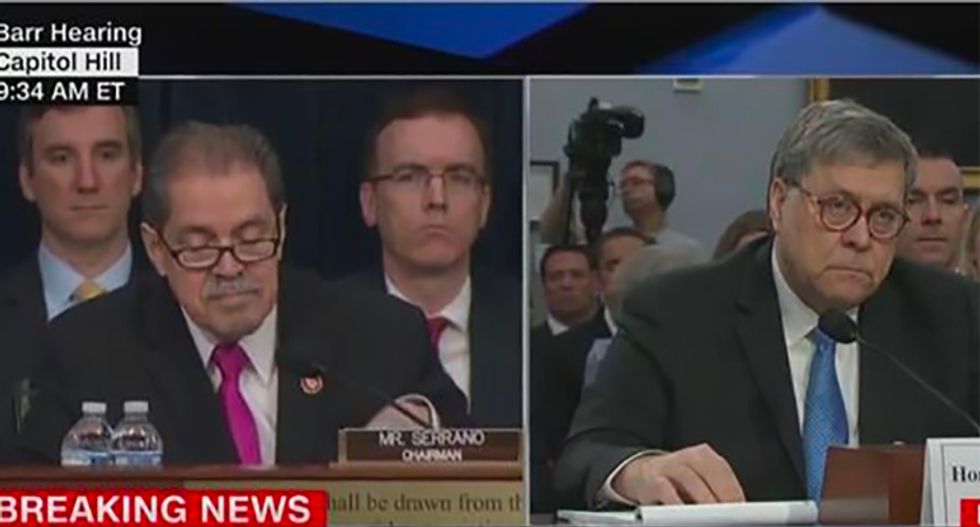 “We have heard what appears to be a lack of commitment to the department’s traditional mission to defend civil rights, disability rights and prevent discrimination,” Serrano began. “We have discussed what appears to be a clear animus towards policies that protect individuals’ healthcare, voting rights, access to education and much, much more.”

Serrano’s opening statement portrayed an upside down DOJ, ticking off agency after agency that’s unable to fulfill its mission. The FBI, he said, made a budget request that doesn’t fund their efforts to address threats facing Americans. ATF needs resources to address America’s gun violence problem, but their “budget request would result in staffing reductions.” Serrano said the DOJ’s budget request “fails to address many of these concerns and raises new problems.”

“And, of course, Mr. Attorney General, we could not hold this hearing without mentioning the elephant in the room and I’m not referring to my colleagues on the other side,” Serrano continued, pivoting to Barr’s handling of the Mueller report.

“You turned a 300-plus page report into a four-page letter that supposedly summarized the findings,” he said. “Last week the New York Times reported that the special counsel’s office had already created summary documents that were ignored in your letter.”

“Congress voted unanimously to see that report,” Serrano reminded the attorney general. “The American people want to see the report. I think it would strike a serious blow to our system and, yes, to our democracy if that report is not fully seen.”

“Since 2017 our nation’s Justice Department has too often failed to meet the needs of the American people,” he added. “I hope that with your ascension to attorney general we can work together to change that.”