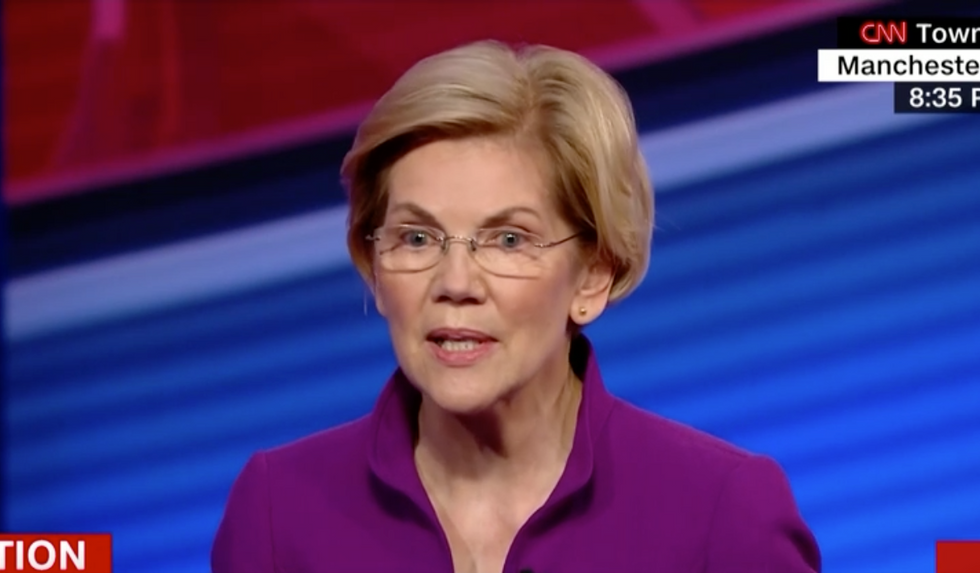 While Sen. Elizabeth Warren drew praise for calling attention to the high rate of maternal mortality in the U.S. and the disproportionate number of black women who die in childbirth, some progressives pushed the 2020 presidential candidate to ensure that inequities aren't worsened through her plan to fight the crisis.

At the She the People Presidential Forum in Houston late Wednesday, Warren spoke about her plan to reduce maternal mortality rates in hospitals through financial incentives.

"I want to talk to the hospitals, where most births take place, and I want to talk to them in the language they understand: money," said Warren. "Because here's the deal. Right now the way that most medical procedures are treated, including those of childbirth, is that hospitals get fee for services...and they get it no matter what the outcomes are.

Monifa Bandele, vice president of the grassroots group MomsRising, had asked Warren about black maternal mortality at the She to People forum and was impressed with the senator's action-based response while also warning that her proposed plan may require more consideration of its long-term effects.

"It was definitely a detailed yet brief response," Bandele told Common Dreams, "but when it actually comes time to make policy, you have to bring all the stakeholders to the table...Many of the interventions that have already been tried have increased disparities."

At the event, the proposal drew cheers from the audience at the event focused on political issues affecting black women. A number of political observers applauded the senator for addressing the issue of racial disparities in childbirth deaths and for having researched potential solutions.

Elizabeth Warren seems like she is putting in work to earn the support of Black women. https://t.co/Wvn6VLEHoY
— Shanita Hubbard (@Shanita Hubbard) 1556205556.0

Super excited to see Warren address black maternal mortality, which (surprise) she seems to have an incredibly deta… https://t.co/sJ0dtAx2PL
— Sady "They" Doyle (@Sady "They" Doyle) 1556138349.0

The rate of women who die in childbirth is on the rise in the U.S., according to a 2017 study by NPR and ProPublica. The number of women dying in childbirth over past three decades in the U.S. has gone up—even as it's declined in other developed countries.

And black women are two to six times more likely to die giving birth than their white counterparts.

Warren cited studies like a 2016 report that appeared in the Proceedings of the National Academy of Sciences, which showed that racial bias in the medical field makes doctors less likely to take seriously black women's reports of pain.

Like Bandele, some progressive healthcare policy experts warned that taking funding away from hospitals with high rates of maternal mortality may have an adverse effect on outcomes for women who are already marginalized by the for-profit healthcare industry.

"These sorts of pay-for-performance programs just wind up penalizing hospitals that take care of poor and disproportionately minority patients, even though they may need more resources to improve care, not less," tweeted Adam Gaffney, president of Physicians for a National Health Program (PNHP).

Incentivizing better care for women, especially black women, is a policy proposal to be commended, said DSA National Political Committee member Ella Mahony, though she stopped short of endorsing Warren's plan due to the effects it could have on hospitals that serve low-income and black communities.

Seems similar to the education policies which financially punished (and shut down!) schools that failed to close th… https://t.co/HlBPTv5xmz
— Ella Em (@Ella Em) 1556200849.0

"We are all about accountability," Bandele told Common Dreams. "We do think the hospitals that have poor rates do need to be held accountable. How we do that is going to require some really deep thinking."