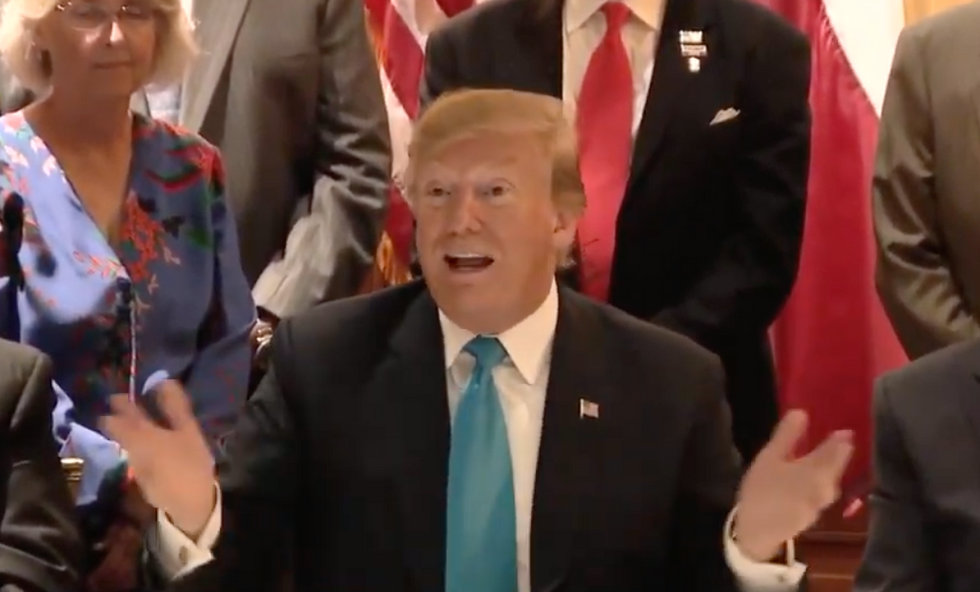 President Donald Trump said Wednesday at a political fundraiser in Texas that he's "going to have to call up more military" to the U.S.-Mexico border, as a growing number of migrants have been apprehended by law enforcement.

But he complained that the military is greatly limited in the kinds of activities it can perform while working domestically.

"Our military, don’t forget, can’t act like a military would act," he said, though it wasn't clear why they would be necessary for them to provide support at the border in their restricted role. And as Reuters noted, Democratic governors withdrew their National Guard troops from the border after complying with Trump's request to provide service members. The governors found there wasn't enough evidence that the troops were needed to justify their presence.

In a troubling tangent, Trump suggested it is unfortunate that critics are worried about the possibility of violence at the border.

"Because if they got a little rough, everybody would go crazy," he said. "They have all these horrible laws that the Democrats won't change they will not change them. And I think they will pay a very big price in 2020 for all of the things, whether it is the fake witch hunt they start out, or whether it is a situation like this. I think the border is going to be an incredible issue."

"Just the president passive-aggressively fantasizing on camera about ordering the US military to use violence against unarmed women and children," said MSNBC's Chris Hayes of the remarks.

The president's comments were reminiscent of a recent report in the Washington Post, which found that the president was most impressed with outgoing Homeland Security Secretary Kirstjen Nielsen when the Border Patrol fired tear gas at migrants at the border.

Trump also chastised reporters Wednesday for supposedly not covering the dangers faced by migrants who cross the border with the aid of smugglers, who he said often leave vulnerable immigrants to die on the dangerous route. He said this "humanitarian" crisis is being ignored, but his own rhetoric and actions have actually served to exacerbate the problems. When immigrants travel in caravans to reach the United States and seek asylum — a safer method compared to relying on smugglers — Trump whips up fear about the caravans and declares them an invading force. And he's told his own border agents to turn asylum seekers away from the border, even though this is illegal and will only increase the chance that they will try to cross the border at more dangerous locations.