The one monumental lie that's ripping us apart 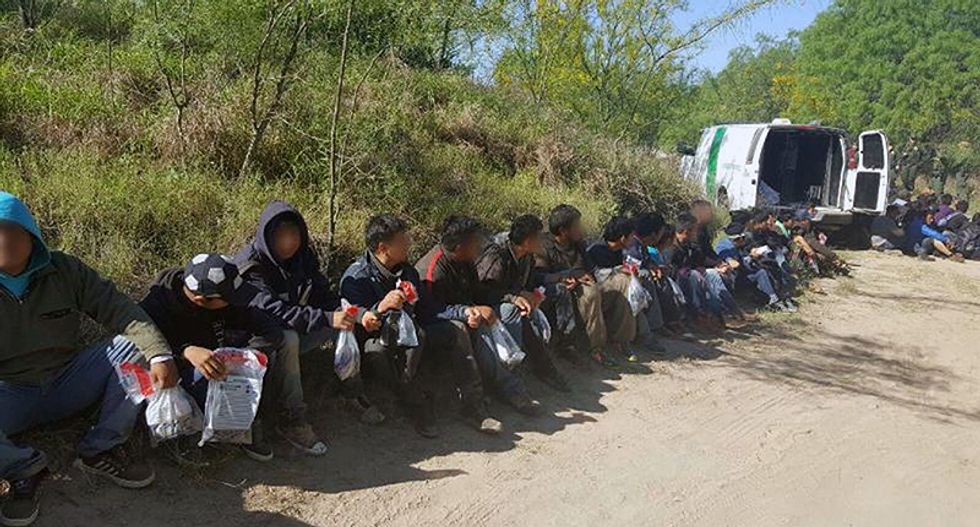 It’s long been clear that living with a constant stream of abusive language and ignorant banter has inured American ears to statements that would in past years have been met with outrage. Even so, Donald Trump’s claim that the country is “full,” a position he reiterated on Sunday evening, is the kind of statement that should so raise a cry from every corner that the ringing silence in its wake suggests a nation in a condition for which there is no other term than sin.

America is a nation of immigrants. That is not a static position. That’s not a statement that was made in 1776 and then was quickly followed by a drawing-up of the national gangplank. It’s always been so. It must always be so. Because a nation that is “full,” one that can turn its broad back on asylum-seekers and raise a wall against outsiders, is not the United States of America. It is fundamentally not.

Families seeking asylum aren’t a fringe issue to Trump’s immigration horrors. They are the core issue on which he has built his whole edifice of lies and fear. It was around the policy on applicants for asylum that Trump, and other right-wing sources, deployed the dehumanizing term “catch and release,” applying to people a phrase used to describe the management of fishing stocks. The derided former policy—under which those seeking asylum were detained long enough to collect their information, determine that they were not known to be criminal, and permitted to enter the United States while awaiting a hearing required by both common humanity and international law—was not a perfect policy, but it was infinitely better than what is happening now.

By sabotaging that policy, Trump has created the ongoing horrors of family separation, tent city gulags, children warehoused in decrepit Walmarts, and thousands huddling at the border suffering in plain sight of the media. All that suffering is not by accident. It’s a goal. Every huddled family, every ripped-away child, is both a symbol for Trump’s supporters that they have the “hard man” they want at the helm, and evidence of the kind of “humanitarian crisis” that Trump can namedrop on his way to being ever more inhumane.

All it took to turn a successful, if far from perfect, system into a tumbling horror show was a lie. This lie: “They never show up at the trials. They never come back, they’re never seen again.” That’s Donald Trump speaking about asylum-seekers. In speech after speech, Trump has claimed that “5 percent” or “3 percent” or “2 percent” or simply “none” of asylum-seekers appear when their hearing date swings around. That’s not just a lie; it’s a huge, blatant, glaringly awful lie absolutely denied by every study and Justice Department statistic. Trump has made that lie repeatedly, without being checked. And that basic failure—of the media, of the Congress, of the people—is the real immigration crisis.

Justice Department statistics show that over the last two years before Trump took office, between 91 percent and 93 percent of asylum-seekers appeared for their hearings at the date and place specified. Even then, the great majority of cases in which applicants did not appear seemed to be mostly simple misunderstandings. Programs put in place over those two years, such as the Family Case Management Program, demonstrated a success rate of greater than 99 percent … right up until the moment that Trump ended them. Even though those programs were not only functioning, but also far less expensive and far less traumatic than keeping families imprisoned.

Consider this for a moment: The government does not provide attorneys to families seeking asylum, but those that are allowed into the United States to await their hearing are allowed to hire attorneys. Greater than 90 percent of families who do not have an attorney in their hearing are denied asylum. And still … they show up. That asylum-seekers do show up for their hearings in such great numbers should be looked on as a point of pride bordering on wonder.

The biggest problem with the previous asylum system, the one most readily cited, was the simple case overload resulting from too few judges dealing with too many cases. The average time before an asylum hearing had been creeping upward for years, driven by a growing backlog of cases resulting from widespread violence across the “Northern Triangle” of El Salvador, Guatemala, and Honduras. By 2017, that backlog had grown to over 700,000 cases. The answer was simple enough: Add more judges to deal with the increased number of cases.

Had Trump continued the Family Case Management Program, and had he expanded the ranks of judges to handle asylum cases, there would be no “crisis at the border.” That he didn’t do so wasn’t a mistake. It was a plan.

Trump’s assertion that asylum-seekers released to await hearing are “never seen again” is a gross lie. And it’s a lie far too important to just become lie number 4,362 in a list 9,000-long and growing. It’s the lie that has to be beaten down when it is uttered. Every time it is uttered.

If the media cannot simply learn the lesson that they must demand admission of this lie—at every occasion, by every Trump surrogate—until Trump can no longer use it to inflict harm on either asylum-seekers or the nation, then those claiming to “report” are lying as much as Trump is. And if Democratic politicians can’t push back against this singular, cornerstone lie, they should consider whether they are really in the right career.

People are dying, have already died, over Trump’s lie. They’re dying in custody. They’re dying in poor conditions across the border. And they’re dying back in the Northern Triangle countries. And more good families, acting out of concerns for their lives and the lives of their children, should feel free to exercise their right to come to the United States and apply for asylum against their genuine concern over violence and instability in their home countries. Every family that does not come because of Trump’s lies is a tragedy for that family itself, and a fundamental loss to the United States.

We are not full.