‘The FBI Appears to be engaged in a modern-day version of COINTELPRO’: ACLU Racial Justice Program deputy director 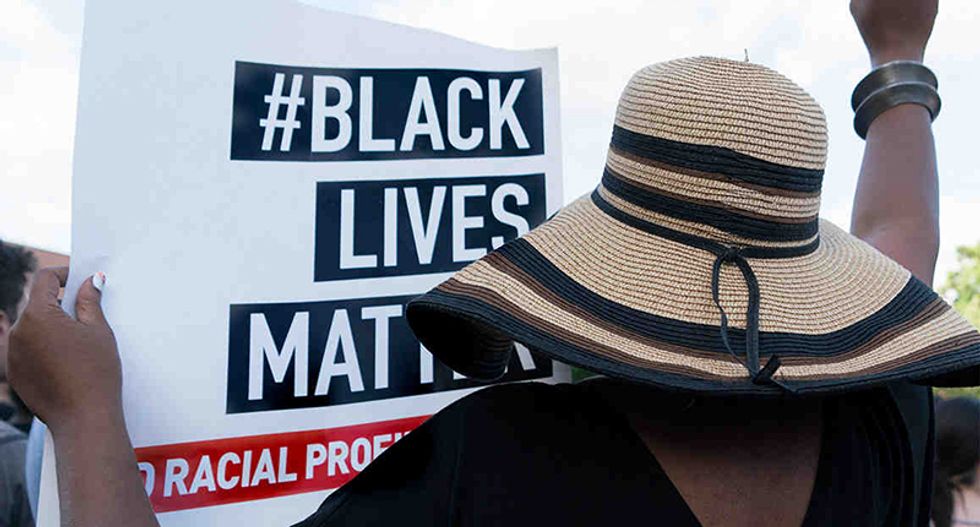 Janine Jackson interviewed Nusrat Choudhury about FBI targeting of black activists for the April 12, 2019, episode of CounterSpin. This is a lightly edited transcript.

Janine Jackson: In the summer of 2017, as demonstrations roiled St. Louis, Missouri, in response to the acquittal of yet another police officer who killed yet another black person, the FBI issued an intelligence assessment that purported to designate a new domestic terror threat: “Black Identity Extremists.” And they predicted that

perceptions of unjust treatment of African Americans and the perceived unchallenged illegitimate actions of law enforcement will inspire premeditated attacks against law enforcement.

Does that sound like a bizarre and dangerously imprecise targeting of people of color engaged in righteous and constitutionally protected protest? It sure does.

But as we discussed at the time with our next guest, a tool in the hands of the country’s most powerful law enforcement need not be precise to be used to do tremendous damage.

Nusrat Choudhury is deputy director of the ACLU Racial Justice Program. She joins us now by phone from here in town. Welcome back to CounterSpin, Nusrat Choudhury.

NC: Thank you so much for having me.

JJ: When we spoke with you in the fall of 2017, the FBI Domestic Terrorism Analysis Unit had just issued this weird and disturbing threat assessment, with this new fabricated category of “Black Identity Extremists.” And the ACLU and other groups were working to see just what they were doing—how was this being used? And the FBI wasn’t all that keen for the sunshine. What has happened, or not happened, since then, such that now the ACLU, along with the Center for Media Justice, have filed a lawsuit against the FBI?

NC: As you said, we requested, under the Freedom of Information Act, records about what appears to be a highly disturbing surveillance program, targeting a fictitious threat of so-called “Black Identity Extremists,” which we and civil rights groups, black-led organizations, black activists and even members of Congress have said raises a red flag that there may be racial profiling and the targeting of black protesters for their First Amendment–protected activity.

After sending that Freedom of Information Act request, what we got back from the FBI were two letters, refusing to even search for certain categories of records that we had requested, and a number of documents, several hundred pages of highly redacted FBI emails, in response to one of the three categories of requested records.

And the FBI, to the extent that it has disclosed any information, hasn’t explained why it’s keeping that information secret with any reliable justifications. So we don’t really know what else is even out there, as well as information from the emails that they’ve redacted.

And this refusal to search is barring the public from getting the information that we need to find out how this surveillance program, targeting this fictitious group that even some law enforcement have said doesn’t exist, is operating and impacting people on the ground.

And that’s why we need a lawsuit. And we the ACLU are standing with our partners at the Center for Media Justice to demand information on behalf of ourselves and the public.

JJ: You’re describing it as a surveillance program. I was going to ask, what sorts of activities do we think that this designation is trying to justify, or is trying to encourage? I mean, it sounds like it could be almost anything. Once you’ve designated something a domestic terrorist threat, it sort of greenlights all kinds of activities, mightn’t it?

NC: The FBI appears to be engaged in a modern-day version of COINTELPRO, and many of us remember, COINTELPRO took place in the last century, in the ’50s and ’60s, targeting covert activities against civil rights leaders and black people who had the courage to protest racial discrimination and to advocate for full equality and racial equity in this country. It looks like it’s version 2.0.

And when we look at this document, this FBI intelligence assessment, from August 2017 that creates this label of “Black Identity Extremists,” it’s based on nothing; there’s no credible evidence that such a movement or group even exists.

But what that report shows is that the FBI is looking at First Amendment–protected activity to determine who is a so-called “Black Identity Extremist.” That report shows a focus at the FBI on social media activity, on the online search terms that people use, and what kind of internet content a person may like, as well as their associations with certain groups.

A lot of that activity is protected by the First Amendment. And this is precisely why the Center for Media Justice and the ACLU are concerned that this creation of this label was simply to justify surveillance of black people who are protesting police violence and state-sanctioned violence against black people.

There’s so many levels to this, but to imagine that various groups would only be fighting back against police racist brutality if they were part of a unified ideological project, and an inherently violent ideological project, that outrage at racist policing is not a motivation that anyone with eyes could have…. I mean, even if you thought that was their sincere belief, that would reflect a lack of intelligence that’s so painful it’s almost unbearable. But that would be the idea, that all of these groups must somehow be linked in an ideological project, otherwise, why would they be engaged in this resistance?

NC: And the assessment itself, this FBI report that creates this label of a “Black Identity Extremist” boogeyman, if you look at the text of it, it’s talking about these six incidents of violence or threatened violence against police. And it doesn’t even link them and, in points, actually says that some of the people involved in these incidents have divergent views.

So it’s circular logic; it undermines itself. There’s really no basis; former law enforcement have criticized it as being a flawed intelligence product. And even current law enforcement, the National Organization of Black Law Enforcement Executives, has called on the FBI to withdraw this assessment, because it is so faulty, and they’ve asked to eliminate the “Black Identity Extremist” threat classification. That means something, when even law enforcement are looking at this and saying, “This doesn’t make sense.”

Members of Congress have also articulated a concern that it looks like it’s directed at people who are protesting police killing of black people, and that includes the Movement for Black Lives.

And this is why this effort, through the lawsuit and through advocacy, to get information about this surveillance program, this effort by the ACLU and the Center for Media Justice, is so important. Racial justice in this country comes about when people protest, and black people have been critical to these movements that have brought about a better protection and realization of rights to equality and fairness that has benefited all of us.

So these modern-day protest movements are critical to realizing the full potential of American democracy and promises to equality and racial justice. Those movements should not be surveilled. The law enforcement resources of this country should be directed towards real threats to public safety, not for targeting people because of their race and their protected beliefs.

JJ: Just finally, we’re talking about it as though it’s a potential tool, or as though it’s something that is on paper. We have to recognize that just the existence of this designation is already having a real effect on the ground, and putting folks in danger.

NC: Absolutely. When the FBI disseminates an intelligence assessment, and this one was disseminated to at least 18,000 law enforcement agencies nationwide, when it does that, it risks inciting police fear of black people, particularly black activists. That is the real, tangible result. And despite the calls by members of Congress, as well as the National Organization of Black Law Enforcement Executives, to withdraw this flawed intelligence product, the FBI hasn’t done that. And so we have no reason to believe that that kind of incitement and harassment at the local and state level isn’t already happening.

JJ: We’ve been speaking with Nusrat Choudhury; she’s deputy director of the ACLU Racial Justice Program. You can find more information on their work and on this lawsuit online at ACLU.org. Nusrat Choudhury, thank you so much for joining us this week on CounterSpin.

NC: Thank you for having me.