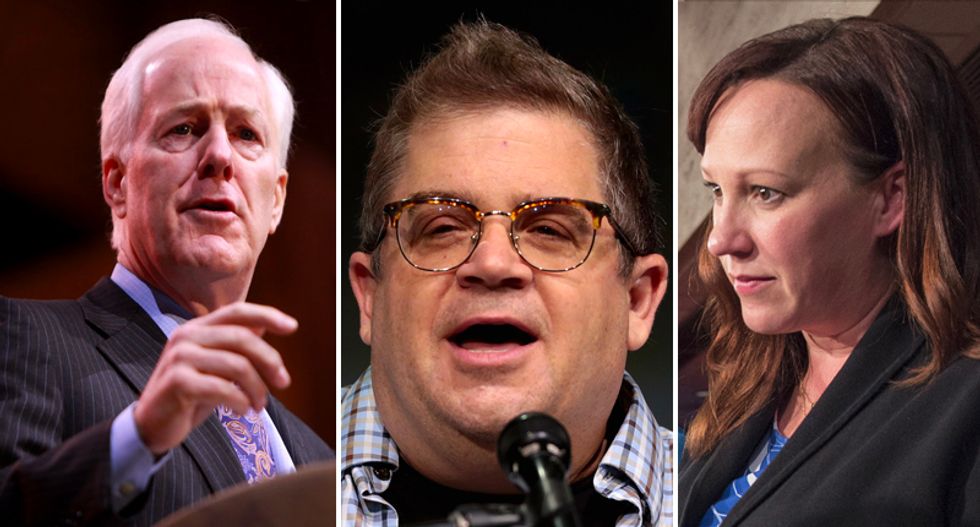 "MJ Hegar "not at all" backing away from celebrity supporters as John Cornyn targets Patton Oswalt" was first published by The Texas Tribune, a nonprofit, nonpartisan media organization that informs Texans — and engages with them — about public policy, politics, government and statewide issues.

As U.S. Sen. John Cornyn derides her as "Hollywood Hegar," his newest Democratic challenger, MJ Hegar, says she's not backing away from her celebrity fans — including comedian Patton Oswalt — and is happy to debate the Republican incumbent on the sources of their support.

"Not at all," Hegar said in an interview Friday when asked if she felt the need to account for the high-profile backers. "I think it’s very clear to be able to be a working-class mom of two and veteran and to be able to take on an entrenched, establishment, dark money-backed Washington lackey, that I’m gonna have to be able to excite people and gain momentum and gain attention and get people excited and energized. I’m proud of my ability to do that and I’m frankly surprised that he wants to start the conversation by looking into where we get our support from."

Citing Cornyn's contributions from corporate PACs, the National Rifle Association and the pharmaceutical industry, Hegar added, "We can talk all day about where our support is coming from."

Since Hegar announced her campaign Tuesday, Cornyn's campaign has been persistent in seeking to tie her to Oswalt, who Hegar featured in a video announcing her campaign for U.S. Senate. The video also featured other celebrities who had publicly backed Hegar's failed bid last year against U.S. Rep. John Carter, R-Round Rock, including “Hamilton” creator Lin-Manuel Miranda and actress Alyssa Milano.

"Making light of child pornography may be funny in Hollywood, but in Texas it’s despicable and wrong," Cornyn campaign manager John Jackson said in a statement Thursday. "The Hegar campaign should either disavow his support or explain why they stand by this conduct."

On Twitter, Cornyn's campaign has also highlighted past Oswalt tweets laced with profanity and vulgar jokes. Oswalt has responded with tweets mocking Cornyn.

In her interview with the Tribune, Hegar also addressed a topic likely to dominate the race: health care. She described her top issue as "access to quality and affordable health care," saying she supports a public option that would allow Americans to buy in to Medicare, something she backed during her race last year against Carter.

The public option is a less sweeping proposal than a single-payer system like Medicare for All that would establish a government-run health care plan for everyone. Like she did in 2018, Hegar cited her experience with single-payer systems in the military to argue the model is imperfect, and she said she wanted to be fiscally responsible in dealing with the issue.

Hegar said she would "never approve a single-payer model for a country that doesn't keep costs low and doesn't incentivize quality."

Before Hegar can fully focus on Cornyn, she has a primary to get through. Her most serious opponent could be U.S. Rep. Joaquin Castro of San Antonio, who has said he is considering a run and will announce his decision soon.

Asked if she anticipates a competitive primary, Hegar said: "I really don't know. I'm very laser-focused on the general."

Hegar said she has talked with other potential candidates and recently spoke with Castro. She declined to elaborate on those conversations other than to describe them as friendly and note that the people "all seem to be understanding that the most important thing is to unseat John Cornyn."

The incumbent has made clear he is ready for battle, amassing a $7.4 million war chest. Hegar said she did not know how much she has raised so far, but "we're doing really well." She said she is not accepting corporate PAC money, which she also rejected during her race last year.

This article originally appeared in The Texas Tribune at https://www.texastribune.org/2019/04/26/john-cornyn-slams-oswalt-mj-hegar-ad/.