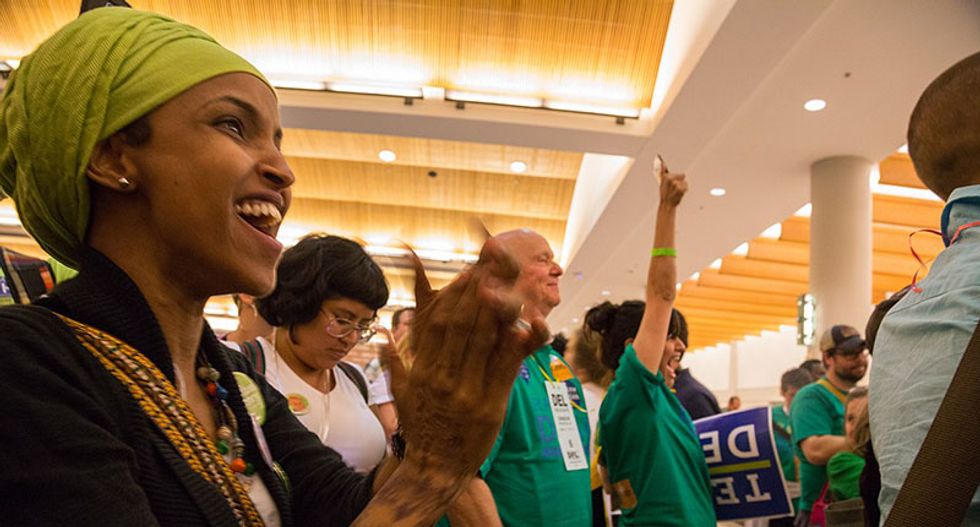 Rep. Ilhan Omar is being targeted once again by both Republicans and Rupert Murdoch's right wing media machine, raising concerns among her supporters and colleagues about the level of hate being directed at her—and prompting a vigorous defense from some of her fellow House freshmen.

Omar isn't the only newly elected Democrat to receive negative attention from right wing and politicians, but the vitriol directed at the Somali-born Democrat from Minnesota has resulted in a number of death threats.

The last few days have been more of the same for Omar after language she used last month in remarks to the Los Angeles chapter of the Council on American-Islamic Relations (CAIR) resurfaced in right wing media.

The Congresswoman mistakenly referred to CAIR's creation as a reaction to the 9/11 attacks in 2001 (the organization was founded in 1994) as part of a broader point about the curtailment of civil liberties in the 21st century in her remarks.

"CAIR was founded after 9/11, because they recognized that some people did something and that all of us were starting to lose access to our civil liberties," said Omar.

That phrasing—"some people did something"—set off a firestorm this week as right wing media and politicians interpreted the comment as downplaying the attacks, which left nearly 3,000 dead.

Much of the outrage has been driven by media properties owned by Rupert Murdoch: Fox News and The New York Post.

On "Fox and Friends" Wednesday morning, host Brian Kilmeade took the opportunity of Omar's comments to suggest the congresswoman had dual loyalties.

"You have to wonder if she's an American first," said Kilmeade, who later clarified his comments.

Rep. Dan Crenshaw (R-Texas), who was a moderator for an Islamophobic Facebook group from May 2018 to August 2018, said on Twitter that Omar's comment was "unbelievable" and implied that the congresswoman was downplaying the attacks.

"Crenshaw is twisting her words because she's black, Muslim, and the GOP and Fox [want] to paint her as foreign and un-American," said Pod Save America co-host Tommy Vietor. "Democrats should call out his bullshit. So should the media."

Rather than take a breather, however, Murdoch properties pushed even harder on Thursday. The Post published as its cover Thursday morning  an image that superimposed Omar's phrasing of "something" over a picture of the World Trade Center burning during the 9/11 attacks.

Splinter's Katherine Krueger noted the hypocrisy in the selectively edited clips and subsequent outrage machine epitomized by the Post's cover.

The irony is that this narrative around Omar's remarks is proving her exact point—bigots began widely equating terrorists with all Muslims after 9/11, but ask us not to do the same if the terrorist is white—so cutting off Omar's remarks to make it seem like she was minimizing the attacks fits an Islamophobic narrative already entrenched on the right.

Mehdi Hasan of The Intercept wondered if the paper—and Murdoch in general—was trying to get Omar killed.

"I mean, this is just astonishing," said Hasan.

Omar, for her part, pushed back against her critics Wednesday. Calling the remarks from Kilmeade and Crenshaw "dangerous incitement," Omar expressed hope that "leaders of both parties will join me in condemning it."

This is dangerous incitement, given the death threats I face. I hope leaders of both parties will join me in condem… https://t.co/UBPvu7Z1Jx
— Ilhan Omar (@Ilhan Omar) 1554913916.0

A number of GOP officials, including Republican National Committee chairperson Ronna McDaniel, co-chair Tommy Hicks, and the party's official Twitter account, seized upon the comments as indicative of Omar's hatred of America and called her remarks a "disgrace."

That the right is once again targeting Omar with vicious attacks did not escape Vox engagement editor Nisha Chittal, who, in a column Thursday, pointed out that the treatment of the Minnesota congresswoman is part of a pattern with how women of color are being treated in Congress.

[T]here's something distinctly racial (and gendered) about the aggression directed at Omar, who is black and one of the first Muslim women in Congress. She has been surrounded by controversy and personal attacks since she took office in January — attacks that are explicitly about silencing outspoken women of color.

The congresswoman did have the backing of her fellow freshmen Reps. Ayanna Pressley (D-Mass.), Rashida Tlaib (D-Mich.), and Alexandria Ocasio-Cortez (D-N.Y.)—herself the target of a mailer Wednesday that described the New York representative as a "domestic terrorist."

All three congresswomen—all are women of color—came to Omar's defense Thursday.

Citing Omar's work for the 9/11 Victim's Compensation Fund, Ocasio-Cortez hit back at her critics on the right.

"She's done more for 9/11 families than the GOP," said Ocasio-Cortez in a tweet, "who won't even support healthcare for 1st responders—yet are happy to weaponize her faith."

Ocasio-Cortez also used the fund to target Crenshaw in particular and questioned the convenience of him only going after Omar in his supposed quest to end hate in America.

"In 2018, right-wing extremists were behind almost ALL US domestic terrorist killings," said Ocasio-Cortez. "Why don't you go do something about that?"

Pressley called for the right to consider context and not to intentionally misinterpret Omar's comments—and put blame for the hateful rhetoric squarely at Murdoch's feet.

"Manipulating her remarks is defaming and dangerous for her and her family," said Pressley. "Stop with this recklessness."

In a tweet posted online shortly before an appearance on MSNBC, Tlaib put blame for the controversy squarely on Murdoch and his media properties.

"The NY Post knows exactly what it's doing—taking quotes out of context and evoking painful imagery to spread hate and endangering the life of Rep. Omar," said Tlaib. "Shame on them, and shame on Rupert Murdoch."

In her interview with Hallie Jackson, Tlaib hammered that point home.

"I'm really outraged because, as a person who has gotten direct death threats myself, I know that her life is put in more danger," said Tlaib.